On the heels of a successful teaser, THQ Nordic has officially greenlit a full HD remaster of Piranha Byte's original Gothic game.

A bit ago THQ Nordic (now called The Embracer Group) released a playable teaser for a Gothic remaster. The idea was to determine if gamers were interested in a remake and gauge buying intent. The publisher wanted to know if it was worth it to remaster the old-school RPG and collected valuable feedback in a survey from the people who matter most (Gothic enthusiasts). The results were overwhelmingly positive, and 98% of the total 43,000 gamers said they wanted the remake to continue.

THQ Nordic, who now owns a wealth of IPs including the Gothic series, decided to greenlit the remaster on the strength of the survey results. It's unknown if the original devs at Piranha Bytes will be attached to the project, but it's highly likely given THQ Nordic owns the studio. The announcement post on Steam mentions opening up a new studio in Barcelona, Spain and that development will enter full swing sometime soon. 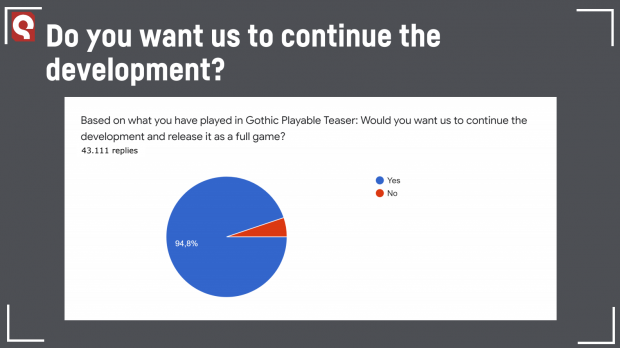 "Over 180.000 players have played the playable teaser so far. On the evening (CET) of February 16 2020, THQ Nordic took the survey offline, and hereby publicly releases the raw data of the survey, as well as highlight graphs. With more than 43.000 answered surveys and over 9.000 (yes, really!) reviews on Steam and various discussions on all social media platforms, there is enough data to check," the publisher wrote on Steam.

This project joins a multitude of others that're in development under THQ Nordic. Right now the company has an incredible 96 projects in the works, of which 52 have yet to be announced. The media titan currently owns an astounding 193 intellectual properties across a variety of franchises and game series and employs 92 international development teams across the globe.