In the past five years, Nintendo's mobile games have accrued over $1 billion from microtransaction spending, analyst firm SensorTower reports. 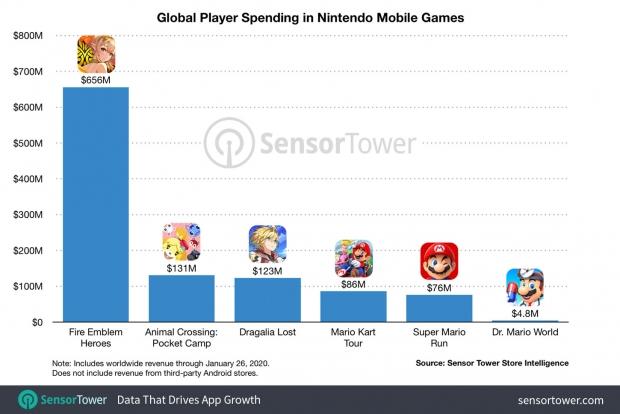 Nintendo's mobile strategy is paying off big time. Since Super Mario Run's release in 2015, Nintendo has earned over $1 billion in worldwide revenues from its mobile titles. The lion's share of those earnings are from the mega-popular Fire Emblem Heroes, which has pulled in a tremendous $656 million in lifetime revenues, making up roughly 61% of Nintendo's total mobile earnings. The next in line is Animal Crossing Pocket Camp, which raked in just a sixth of those revenues with $131 million.

These games are mostly popular in Nintendo's native country of Japan, though, and haven't gained tremendous traction in other regions. Roughly 54%, or $581 million, of its mobile cash was generated in Japan, whereas the United States made up 29% or $316 million. This makes sense given Japan's appetite for mobile and handheld games.

Nintendo plans to keep doubling-down on monetization experiments in its mobile games. We've seen Nintendo embrace everything from free-to-try models with Super Mario Run, which ultimately failed to gain the momentum Nintendo wanted, to outright gacha-style microtransactions with Fire Emblem Heroes, which have paid off in spades.

Then there's the monthly subscription passes in Animal Crossing Pocket Camp and Mario Kart World Tour which charge gamers $5 a month for extras.

We'll see Nintendo adapt more of its popular IPs and franchises into mobile games. The company originally planned to release 2-3 mobile games a year, but has since slowed down to concentrate on more monetization methodologies.