Fallout 4 is getting a new workshop mode that lets you build your ultimate settlement anywhere at any time with unlimited resources. There's just one catch: They're not actually real. 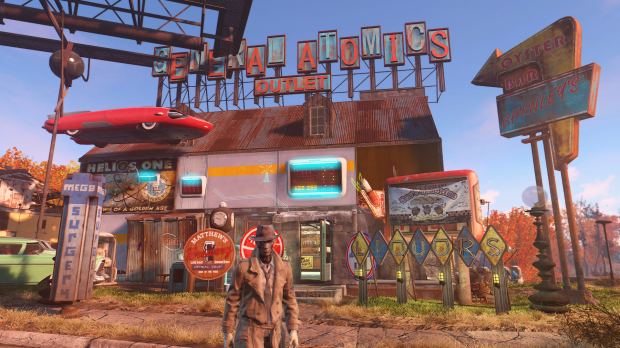 Fallout 4's new virtual workshop mode is basically a holodeck simulation where you build crazy settlements in unique areas that aren't actually settle-able in the base game. The mode is part of the Creation Club, and lets you build a settlement in specific world zones like the GNR Building, in a radioative atomic crater, and even on a deserted island.

While PC modding absolutely annihilates vanilla Fallout 4 settlement management, this feature is great for anyone who wants to dabble in vanilla building before moving on to the main event. It's a great entry point and serves as a good alternative to PS4 players who don't get expansive mod support. The only downside is the settlements aren't real and you can't interact with them outside of the VR pod simulation--they're not technically part of your narrative experience.

As someone who's spent a long time modding their settlement, I can say it's a fun and rather rewarding experience. VR workshops in no way replace traditional settlements because they're not actually included in the main game, but it's a neat way to practice.

This mode probably won't be free though.

Everything on the Creation Club is a paid mod, so expect to pay up to get access. This is rather unfortunate considering PC modding is the best route (and it's free), but it's massively inconvenient now that Bethesda's updates continually break scripts needed for these big mods.

Bethesda is targeting a December release for Fallout 4's virtual workshops, but no exact pricing or release date have been confirmed.

Travel to new worlds from the comfort of your Fallout 4 settlement with Virtual Workshops! Featuring unlimited crafting resources, huge settlement budgets, placeable enemy spawners for your own custom encounters, and a selection of weathers, music, and visual filters to choose from.

Simply craft a new VR Pod, hook it up to a power source and a terminal, and you can transport yourself to a series of exotic landscapes and iconic Fallout locations, including Grid World, Atomic Crater, Desert Island and the Capital Wasteland's GNR Building Plaza.