Amid financial woes, Starbreeze is surviving off of lifelines right now. Things could get much worse if its big new Payday game somehow fails. Starbreeze Studios, the company behind the huge Payday franchise, is awash with debt. The company has been forced to shut down various business ventures like StarVR to eliminate spending, all while significantly halting games development. But how bad off is Starbreeze really? According to new documents filed in a Stockholm court, Starbreeze owes a total of $40.8 million, but the good news is its assets are worth nearly four times that amount, or $164.9 million. The bad news? Most of that worth comes from the Payday franchise.

The company's new five-year debt payback plan hinges on one thing: Payday 3. Starbreeze is betting big on the sequel. The plan sees Starbreeze securing a big publishing contract to fund Payday 3's development for a release by 2023, giving the company roughly a year to absorb cash from sales after launch before it has to pay back its debts.

Any developer will tell you risking it all on one big game is extremely ill-advised. Starbreeze doesn't have a choice--Payday is the only real game development capital asset they have at this point.

If in the unlikely scenario that Starbreeze can't actually get a publishing contract for Payday 3, the company will likely have to sell the IP. But that's a very big if.

Payday has been consistently lucrative for Starbreeze and existing publisher 505 Games. I don't see why 505 wouldn't dish out another similar contract for Payday 3 after Payday 2's landmark success on all platforms.aa

But the possibility is still there, and if Payday 3 can't actually get published by a company willing to meet on Starbreeze's terms, we could see asset liquidation and eventual company dissolution. The Payday IP could be auction off in this case to other games-makers like EA, Take-Two, Activision-Blizzard, or hell, even Ubisoft. 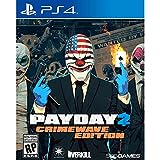