As an online-only game, The Elder Scrolls: Blades still seems like an iffy bet on the Nintendo Switch.

Right now the Switch doesn't play all that well with online-based games. Specific games function, and titles like Paladins actually run quite well, but it's still an awkward kind of experience for an on-the-go device. Especially when that experience is singleplayer-driven. So we're a bit dubious about The Elder Scrolls Blades, Bethesda's new free-to-play microtransaction-based RPG, doing too hot on the Switch.

Bethesda recently confirmed Blades will be online-only on the Switch, which isn't a surprise for a monetized, engagement-driven game of this nature. The idea is to keep you hooked to a connected environment where your progress, data, and spending habits are tracked, and it also allows for cross-saves and cross-play on all devices. It's also a way to constantly tempt you with the real reason the game exists: The microtransaction storefront that lets you pay money to bypass wait timers.

The studio says an offline mode could happen at some point. But right now it's online-only to foster engagement, spending, and the kind of live service revenue wheel Bethesda has been chasing lately. First we had The Elder Scrolls Online, then Fallout Shelter, then Fallout 76, Wolfenstein: Youngblood, and now Elder Scrolls Blades.

So far the company's track record with service games has been spotty and disconnected. Fallout Shelter did well, as did TES Online, but Fallout 76 was and still is a bomb.

"Yes, TES Blades is online-only. But offline mode is something we definitely hear from a lot of people for the game in general, so that's something we always constantly look at," Blades project lead told Nintendo Everything.

"We want to make sure--the online game, we're adding PvP in the fall, we want to make sure cheating isn't an issue. So it's like, how do we do an online mode that makes sense? Right now we're requiring an internet connection, but in the future it's something we may add if we can have a good solution for it."

Blades on Nintendo Switch will also support motion controls via JoyCons, allowing gamers to attack and block similar to Skyrim. But unlike Skyrim, Blades will be significantly limited with its content offerings. It's basically a Skyrim Lite Lite that sees in-game mechanics, items, and tons of other beloved RPG features stripped out or extremely diluted to promote massively grindy mechanics. 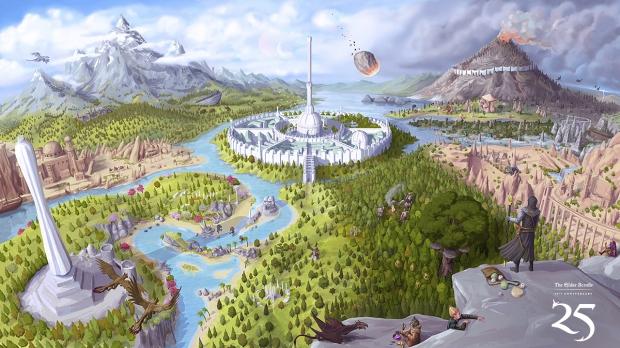