Doom Slayer, the infamous rage-fueled, demon-smashing, one-man army who leaves utter obliteration in his wake, has his moments of humanity. But you have to squint and look past all the blood and guts to find them...and they're not always obvious. 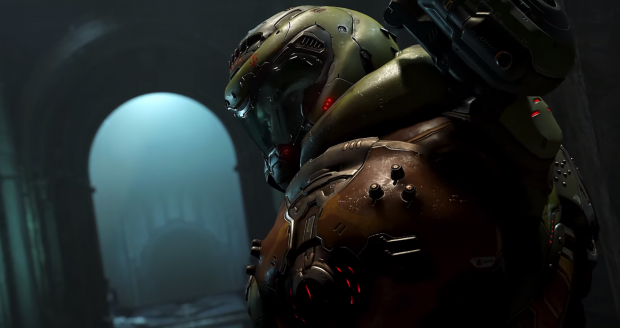 Doom: Eternal is a video game first and a sprawling cinematic experience second. id wants to make sure you get your money's worth and have a good time more than it wants to immerse you in a faraway world. Part of that fun comes from not delving too far into Doom Slayer's personality. Sure we have a lot of lore and history behind the mythical Slayer, but who's behind the helmet? We never know why Slayer does what he does. Is he saving mankind, or does he just want to massacre demons?

id wants to keep you guessing, but if the devs had to pick, Slayer isn't a total unfeeling metal machine of death but more akin to a murderous rampager who has a few slivers of humanity. Doomguy is more like Michael Myers than Terminator, if you will.

"We really have to be selective in when we reveal his humanity. If we start doing it too much, it just sucks. It's like 'I think he does care about them. Does he care? I think he does. He didn't punch that guy.' We've got it tuned so that the slightest pause or inflection makes you read into it. It's not easy to keep."

The recent Doom: Eternal story trailer highlighted some of this. In the footage, some high force (possibly a god) warns the Slayer that his actions will call upon heaven's fury. Humans have to pay for what they've done (presumably for opening the gateway to Hell on Mars) and no one can save them.

"What you interfere with now is bigger than you could imagine. If you continue, you will bring down the heaven's wrath. It is written. It is their time to give penance. You are but one man. They are no longer your people to save," the deity tells Doom Slayer.

Of course none of that matters to Doomguy. He's not worried about wrath or fury or fire. Like Michael Myers he just keeps on coming, and like the Terminator, he annihilates anything in his path.