Doom: Eternal was created to keep you entertained all the way through. From the first level to the endgame where you slay interstellar archangels from another dimension, id wants you to be engaged--but not in the online multiplayer sense. 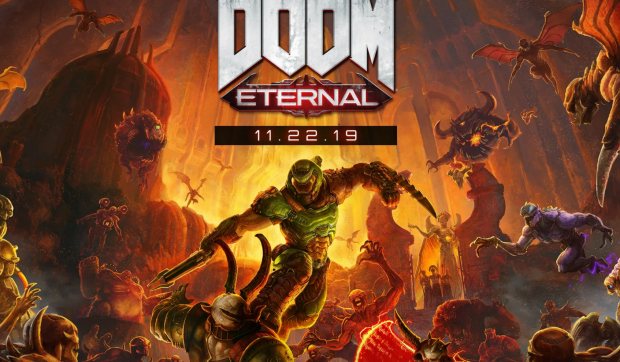 id isn't creating an immersive, cinematic experience with Doom Eternal. It's not meant to be some grand sprawling affair into a dramatic, narrative story arc. As id says, it's a video game with a capital V, soaked in blood and violence. The next Doom puts fun and gameplay over immersion and it's all the better for it: it looks like a video game, walks like a video game, and talks like a video game, complete with insane action and thrilling chaos. All of these things are wrapped up in one focus: to keep you engaged in a singleplayer world that's there for your amusement.

"The game is about learning the tools, execution against demons, and understanding the metas. It's really about controlling the fight and being aggressive. It's challenging and people die a lot, but we always say 'death is the best way to learn'. I don't think we've punished people and our load times are really fast," Stratton continued.

"Engagement really was our biggest word around development and still is," creative director Hugo Martin said in a recent Giant Bomb interview.

"Just how do we engage the player. We want you thinking...if last time it was combat chess, it's speed chess now, requiring the player to think on their feet and as a result I think the messaging of the game has had to get a bit bolder because you're moving so fast as you do things. So you'll notice that the items stand out because we want to make sure the player is not going to die because we tried to be immersive and hide things in the world."

The FPS carnage isn't the only way id will keep your attention in Doom Eternal. The game takes place on tons of different interdimesional locales, from the fiery depths of hell to the farthest reaches of the Sentinel homeworld and even in the high heavens itself.

According to Stratton, Eternal will consistently blast new content for gamers to annihilate at every turn. We'll see tons of new demons--Doom Eternal actually doubles the demons--and larger-than-life backdrops and setpieces to continually inspire awe and that radical rip and tear motivation the series was built off of.

"Part of adding new demons was reflection on 2016. We saw gamers were facing a bit of fatigue by the end. In Doom Eternal you're going to be facing new stuff all the way through the game. Literally down to the last level you're going to see stuff you haven't seen up to the point, including environments, and the new white heaven area...that's near the very end of the game," Stratton said.