There have been some new leaks on the next-gen X570 line up of motherboards from ASUS by Vietnamese site NguyenCongPC.vn which has some early reviews up on the ASUS TUF X570-Plus Wi-Fi and ASUS Pro WX X570-ACE motherboards.

ASUS will position its TUF Gaming and PRIME motherboards underneath the ROG Strix branding, whille ROG sits on top of the pyramid for the enthusiasts and AAA gamers... something we've learned from the early reviews.

Starting with the ASUS ROG X570-Plus Wi-Fi we have a nearly-packaged board with a slick design thanks to its black and yellow theme throughout. It's not too much, but it is enough. We have a single PCIe 4.0 x16 slot while the other PCIe 4.0 slot is just x4 electrically, something found out in the review. Another note is that the VRMs on the board are "designed for a 12+2 circuitry but are actually being controlled by the ASP1106GGQW in a 4+2 configuration with 4 real phases, you'll find this controller on many B class motherboards".

Next up we have the ASUS Pro WS X570-ACE which has a more professional design, and 3 x PCIe 4.0 slots with 1 x16 and two x8 slots. This would be perfect for some crazy high-end storage enthusiasts, given the bandwidth available on PCIe 4.0. We also have a "12+2 phase setup using the PWM ASP1405I controller that is actually located on the back of the PCB". 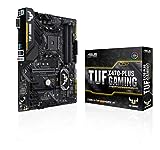