Elon Musk's SpaceX and NASA have confirmed that the launch of 'Crew Dragon' has been successful with the spacecraft safely landing back on Earth.

'Crew Dragon' launched from Earth back on March 2nd and was an unmanned mission to the International Space Station carrying 400 pounds of "supplies and equipment". The objective of the mission was to prove that SpaceX and more importantly the inhabitants of Earth had developed a safe way to transport humans and cargo up to the International Space Station.

Another goal of the US is to stop their dependence on Russian 'Soyuz' rockets and since the success of SpaceX's 'Crew Dragon', NASA has awarded SpaceX and Boeing Co a total of $US6.8 billion to build a competing rocket and capsule system. Above you can see the Dragon capsule hitting the Atlantic ocean, it was shortly recovered by a boat and a crane was used to hoist it out of the water. From the images we can see that the outer shell of the craft has suffered burns upon its re-entry into the atmosphere.

At the moment the results have not be collected and analyzed so its unclear whether or not the mission will impact SpaceX's 2019 launch schedule. "I don't think we saw really anything in the mission so far - we've got to do the data reviews - that would preclude us from having a crewed mission later this year." said Steve Stitch, the crew program's deputy manager with NASA. 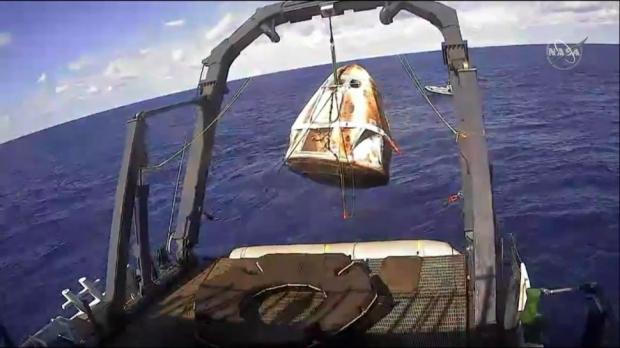