We know that the world of 5G begins this year with an unlimited marketing train starting with 5G leader Qualcomm, but both Qualcomm and Intel were teasing 5G modules for M.2 slots at Mobile World Congress 2019, an interesting move for 5G adoption. 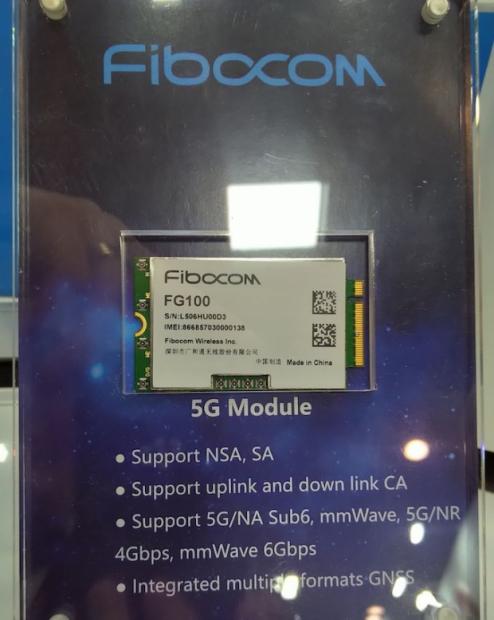 Fibocom was showing off its FG100 module at MWC 2019, a new M.2 module that packs the Intel XMM8160 5G modem that will make its way into new PCs and laptops. AnandTech also saw a "similar M.2 module" that used the Qualcomm Snapdragon X55 modem, and was on display at the Qualcomm booth at MWC 2019. The new 5G modules are on the widest M.2 standard which is 30mm wide, and as AT notes is "8mm wider than the storage based drives we normally see in this form factor". The Fibocom FG100 has support for both NSA and SA networks, and 5G in mmWave bands and sub 6GHz, too.

AnandTech talked with Fibocom at MWC 2019, with a representative saying "he expects the module to be used in devices in 2020, and they're waiting for the hardware, software, and transceiver setup to be finalized, although he wasn't able to say exactly when this would be. Fibocom has been a partner with Intel on 4G modems, and have supplied LTE units for lots of access points and to laptop manufacturers such as Dell, HP, and Lenovo. We should expect something similar when it comes to 5G, but only in 2020 and beyond".

As for the Qualcomm side of things, the Snapdragon X55 was "a bit different" according to AnandTech. Ian Cutress of AnandTech explains: "We are still talking about a similar 30mm wide module, but it appears that Qualcomm has several partners that will be making the modules depending on specific customer requirements. Telit, for example, had two modules, the FM980 and FM980m, which differ in size".