CES 2019 - MSI took some time at the Consumer Electronics Show this year to unveil a beast of a new laptop: the new GS75 Stealth, a new 17-inch gaming laptop that rocks NVIDIA's new GeForce RTX 2080 with Max-Q. 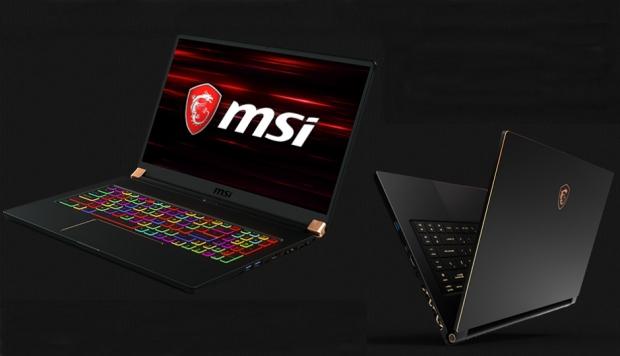 The new MSI GS75 Stealth features a large 17-inch screen with native 1920 x 1080 and 144Hz refresh rate, but lacks G-Sync for some strange reason. Inside, we have new 6C/12T processors thanks to Intel's 8th-gen Core i7 processors, with a Core i9 model planned for the near future. MSI has used an improved 7 heat pipe cooling system across both the CPU and GPU, so we should expect foot-to-the-floor performance from the GS75 Stealth gaming laptop. The GPU can be configured through to NVIDIA's new GeForce RTX 2080 with Max-Q, ensuring you'll hit 144FPS at 1080p in all games.

MSI is being much more open about accessing the GS75 Stealth as well, letting users gain access to all three M.2 slots if they want to manually upgrade their storage. Another nice feature is that MSI was able to reduce the physical size of the power brick, so instead of a large power brick attached to the GS75 Stealth there is a more petite charger that it'll ship with.

The entire thing weighs just 4.9 pounds, has up to 8 hours of battery in productivity mode on its 80-watt hour battery. MSI hasn't said anything about the price of the new GS75 Stealth just yet, but we should have more information later this month when it goes on sale.