NVIDIA officially announced the GeForce RTX 20 series graphics cards during their GeForce Gaming Celeberation event in Cologne, Germany last week and while a bunch of AIB partners showed off their custom RTX 2080 Ti and RTX 2080 cards, KFA2 wasn't there.

KFA2 has just unveiled their new RTX 20 series graphics cards with GPU Boost clocks that are yet unknown, with both cards coming in as a sleek dual-slot card with a dual-fan cooler.

They're very similar to the Founders Edition cards from NVIDIA, but with different styling and some 'What's Your Game?' branding on the top of the card next to the GeForce RTX branding. 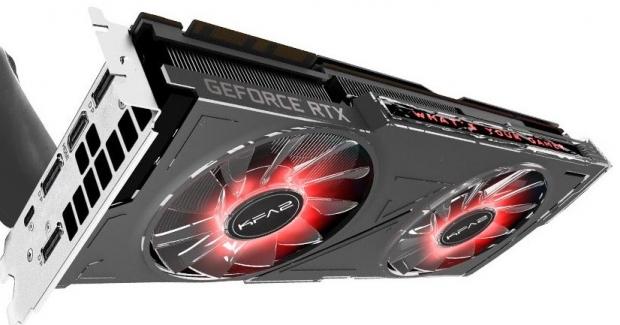 Both of the new cards will have support for two-way NVLink, with the same 3 x DP 1.4, 1 x HDMI 2.0b, and USB Type-C with the new VirtualLink connector for next-gen VR headsets.