NBA 2K18, the basketball simulation game from 2K games, has had an announcement from the publisher. The title has reached a massive 10 million units sold with over 2 billion games played since its release.

NBA 2K18 launched on September 17th, 2017 it was released on the following platforms: PlayStation 4, Xbox One, Switch, PlayStation 3, Xbox 360, and PC. Since the series' beginning back on the SEGA Dreamcast, the franchise has pushed the limits for game sales with selling over 80 million copies and counting.

This achievement has not gone unnoticed, parent company of 2k Games, Take-Two Interactive have given a statement congratulating the efforts. Strauss Zelnick, the Chief Executive officer of Take-Two Interactive has said in a press release to GamesBeat that "NBA 2K18 is our highest-selling sports title ever, and a testament to the tireless hard work and innovation of the team at Visual Concepts. The ability to improve consistently upon an annual series and grow its audience reflects the team's drive to remain on the leading-edge of pop culture and finding new and exciting ways to captivate and engage players."

According to the Twitter post that was released onto the NBA 2k19 Twitter page, NBA 2K18 has had 31,501,636 My Players created, which equats to almost the entire population of California. The post also reveals the total amount of hours clocked on the game, players have spent as a conglomerate 618,519,559 hours which is equal to that of 70,618 years. For more information about the upcoming NBA 2K19 that will be released on September 11th, visit the official NBA 2K19 website here. 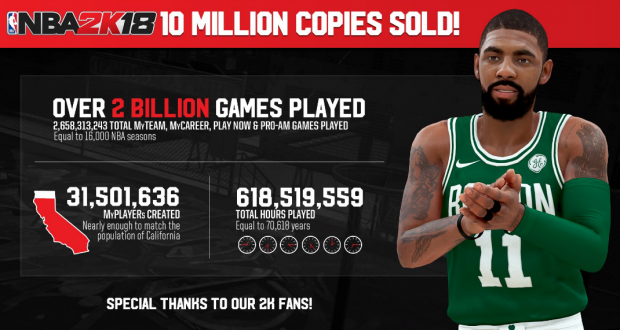