Nintendo has just announced their first new Labo kit since the release of the cardboard controllers back in April this year. The new kit is called the Labo 'Vehicle Kit' and will be coming with a selection of new vehicles players can enjoy.

From the above trailer that was released onto the Nintendo YouTube Channel, players can see that the 'vehicle kit' contains three vehicle options. The vehicle pack will include a Toy-Con Car controller, Toy-Con Pedal, Toy-Con Plane stick, Toy-Con Key and a Toy-Con Submarine. Players will have the liberty of switching to any of the available vehicles at any given moment, this will be done by placing the Toy-Con Key within any of the vehicles with the obvious consideration of the terrain in-game.

A short description of the pack has been provided, it reads as follows: "Make, Play and Discover new adventures with the all new Nintendo Labo: Vehicle Kit! Create and control three new Toy-Con Projects, including the Car, Plane, and Submarine. Use your special Toy-Con Key to activate the different Nintendo Labo controls for each vehicle, and explore a mysterious world full of challenges!"According to the Nintendo Labo website, the vehicle pack will be costing players $69.99 and won't be available until September 14th. For further information visit the official Nintendo Labo website here. 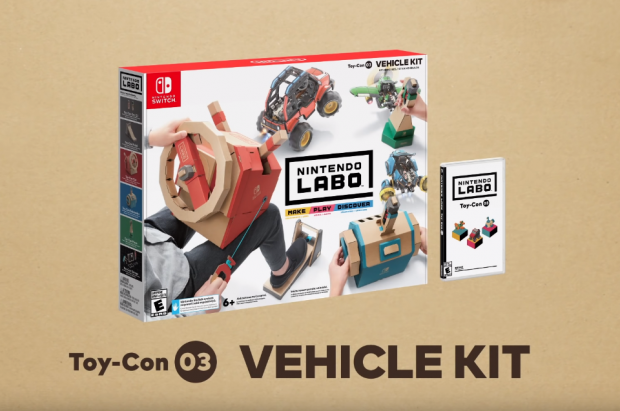