Dragon Ball FighterZ is on the way to the Nintendo Switch at end of the year, and ahead of its launch, information has surfaced regarding an open beta for the title.

The news comes from Twitter user BlackKite, who has come across what appears to be evidence for a Dragon Ball FighterZ open beta coming to the Nintendo Switch in Japan. Japan's latest release of V-Jump has also revealed that the Dragon Ball FighterZ will also be receiving two new DLC characters around the same time, Base Vegeta and Base Goku.

Base Vegeta and Base Goku will be $5 each and will be available sometime throughout August. Base Goku will have Kaioken and Super Spirit Bomb abilities and Base Vegeta will be arriving with Galick Gun and Galaxy Breaker. According to Siliconera, the open beta coming in August will also start a new 3v3 local battle feature that players will be able to enjoy. At the moment the beta is only planned for release in Japan, hopefully we see a western release as well around the same time. Dragon Ball FighterZ is already available on PlayStation 4, Xbox One and PC. A Nintendo Switch release will be coming on September 29. 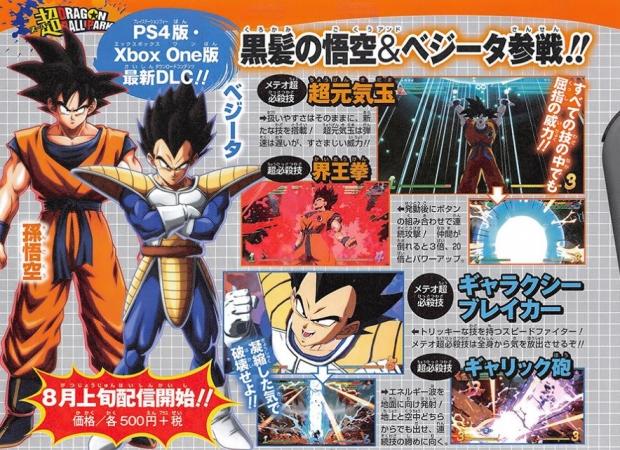 Back in March, a trailer for Bardock and Broly coming to Dragon Ball FighterZ was released, you can catch up on that here. In other news about Broly, a brand new movie is coming to Japanese theaters on December 14.