Ubisoft has unveiled new details from the Far Cry 5 season pass, something that will include a bunch of goodies including a detailed DLC path, and a free copy of Far Cry 3.

Instead of continuing the storyline of Far Cry 5 with the DLC, Ubisoft will be providing three different pieces of DLC with Dead Living Zombies, Hours of Darkness, and Lost on Mars. This move gives me the same feels as Blood Dragon did, and I'm truly digging what Ubisoft is doing with Far Cry 5 and its season pass.

Dead Living Zombies will throw Far Cry 5 players against "hordes of the undead" in a "zombie-infested wasteland", while Hours of Darkness will throw you into Vietnam where you will fight the Viet Cong. Lost on Mars sounds the most interesting, as it will put players into a spacesuit and have you fighting giant spiders on Mars.

As for the newly-announced Far Cry 3 Classic Edition, it will be a standalone game made available four weeks after those who pre-order the Far Cry 5 season pass. Ubisoft details the remaster as "an update to the classic open-world adventure game". 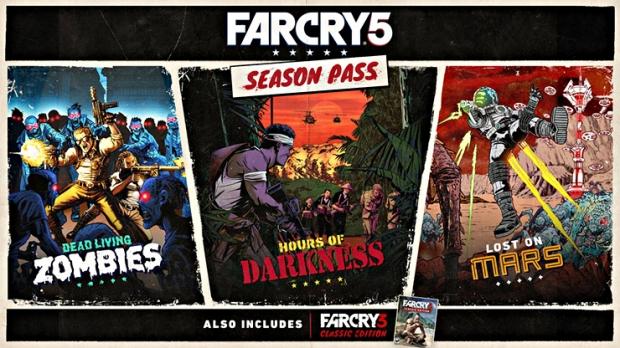