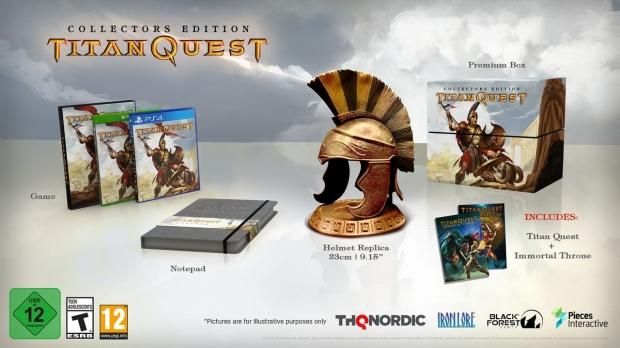 Titan Quest's console port is actually coming to all modern consoles including the PS4, Xbox One, and even the Nintendo Switch. The latter is a very welcome surprise and I'm wondering if it'll have some form of couch or on-the-go co-op action, especially given the Switch's transforming nature. The publisher notes that the Switch version doesn't yet have a release date and will likely miss the March 2018 timeline for the other versions.

THQ Nordic is also offering two editions of the game: the standard edition, which comes with the base game and the Immortal Throne expansion, for $30; and a collector's edition (PS4, Xbox One, PC) for $120 that includes a Greek helmet replica, a special box, and a notepad.

Titan Quest on consoles will feature full online multiplayer with up to 6 players in a co-op environment, alongside fully remastered visuals to meet today's systems.

Check below for more about the upcoming port:

Behold, the PC gods have spoken... Titan Quest is granted to also release on all current-gen console platforms in 2018. Apart from the online- and offline-release of the Standard Edition of the game, a mighty Collector's Edition has been melted in Hades' hellfire, hammered and forged on Hephaestus' anvil, infused with Mars' wrath, and charged with Zeus' lightning.

Titan Quest for consoles will launch for PlayStation 4 computer entertainment system and Xbox One on March 20th 2018. The version for Nintendo Switch is in development and will be released (insert drumroll) when it is done.

The quick & dirty facts on these editions

From Age of Empires co-creator Brian Sullivan and Braveheart writer Randall Wallace comes an action role playing game set in ancient Greece, Egypt and Asia. The Titans have escaped their eternal prison, wreaking havoc upon the earth. The gods seek a hero who can turn the tide in an epic struggle that will determine the fate of both men and gods. Are you ready for the quest?