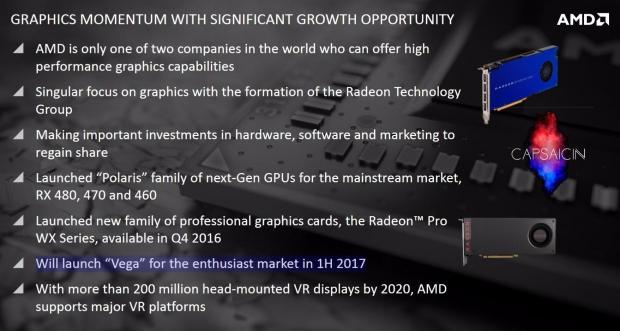 If we look at the Polaris announcement to retail launch, it was announced in December 2015 and released to market with the introduction of the Radeon RX 480 graphics card in the last days of June. If the same timeframe is used for Vega, we should expect an unveiling in December and a launch earlier than Polaris, and maybe sometime in March-April in order to make a bigger impact on the market - especially against NVIDIA's formidable Pascal-powered graphics cards.

AMD's next-gen Vega architecture will be an interesting upgrade over Polaris, which I've been hearing from industry sources will be a superior architecture in many ways. Vega will be using HBM2 technology, so we can expect much more VRAM than the HBM1-based Radeon R9 Fury X offered, which featured just 4GB of HBM1. We will probably see 8GB and 12GB models, but I'd like to see a higher-end Vega graphics card with 16GB of HBM2 - ok, AMD?