No Man's Sky's free substantial content updates may transform into paid DLC after all. 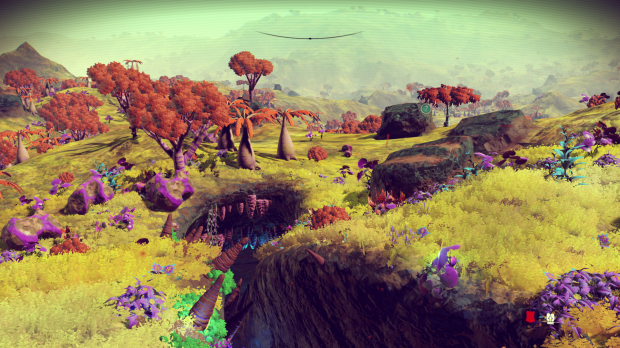 Remember when Hello Games pushed out the huge day one content update for No Man's Sky? It wasn't just an optimization update--according to the devs that patch added in new features and content, usually the kind of stuff gamers get charged for as DLC. The devs said that No Man's Sky's updates will always be free, but at what point? Can the devs afford to add in massive chunks of content for free?

"Hello Games will continually update No Man's Sky this way. This is the first of many," Sean Murray said at the time, promising the next free update will add in the ability to build bases and own space freighters, as well as graphics options that will "really change the game again."

Now it looks like Hello Games is rethinking that free strategy. Sean Murray told UK publication Daily Star that it was "perhaps naive" to say that all game updates would be free, including huge content patches.

"Maybe in the future there's some reason why we just couldn't possibly afford to do a certain feature without charging for it," Murray said.

Hello Games has made it clear that this is just the beginning for No Man's Sky, but I don't think many gamers will be willing to pay too much for DLC. After all, the indie game launched at the same $59.99 price tag as all AAA titles, and it still seems like a huge beta test in many ways. There's quite a bit missing from the experience, so Hello Games will want to think about their paid DLC approach very carefully.

Actually Sean Murray seems to acknowledge that the game is somewhat spare right now, referring to it as a "canvas" and implying it isn't fully painted just yet.

"This universe we've built is a pretty large canvas, we've got a lot of ideas. This is the type of game we want to be," Hello Games' Sean Murray wrote in a blog post.

In any case, let's hope that we still get a few substantial content updates in the near future until we start having to pay for DLC. The dev confirms that Hello Games is 100% committed to customer support issues right now, and will only move on to fresh content once all the bugs and performance glitches are ironed out.

If you're curious whether No Man's Sky is right for you, check out our "what is No Man's Sky?" primer and our beginner's guide.