Yesterday Sony launched the second pre-order wave for its complete $499 PlayStation VR package, which sold out on Amazon in just four minutes. Now the inevitable ridiculously high-priced eBay listings have started to pop up, commanding $1,000 prices. 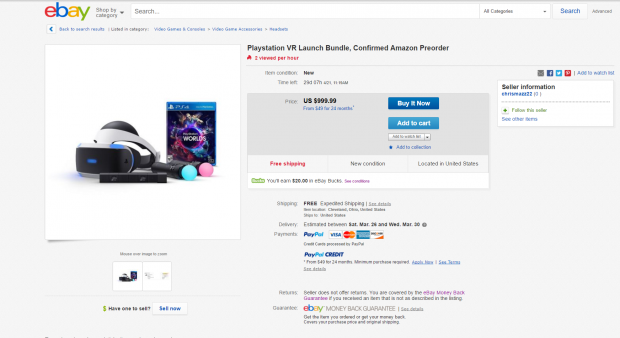 Just like the sold out PS4 pre-orders, eBay scalpers are in full force to sell you overpriced guarantees for Sony's new PSVR headset--provided you're willing to pay double the MSRP. The listings range from $799 to $999 for the PSVR Launch Edition, which includes the PS Camera, PSVR headset, and two Move controllers.

A quick search on eBay reveals dozens of PlayStation VR listings, so it looks like almost everyone is willing to part with their pre-orders in order to make some cash. If you want to get a PlayStation VR but didn't secure a pre-order, don't panic. Taking a gander at our PlayStation VR pre-order timeline, you'll realize that Sony is holding two more windows before the headset's launch in October.

As early as next Tuesday, consumers will be able to pre-order the $399 core PlayStation VR headset. Although this version doesn't include the Move controllers and the required PS Camera, you can buy these separately, so it's not a big deal. Although if you plan to go this route, I'd advise you to buy the extra peripherals ASAP as stores are already running low on supply. Once everything sells out, Sony will have to belt out more hardware. Even if you miss a pre-order, I'm confident Sony will have plenty of PlayStation VR headsets on store shelves.

In short, there's no need to shell out $1,000 for this headset, especially when you can be a fully-fledged PC for that much. You'll have plenty of opportunities to pre-order before October.