NVIDIA has posted its earnings report for Q4 2015, smashing its previous records pulling in a huge $1.4 billion - 7% higher than the previous quarter of $1.3 billion. Full-year numbers were also impressive, with a record $5.01 billion - up 7% as well, from the previous year of $4.68 billion. 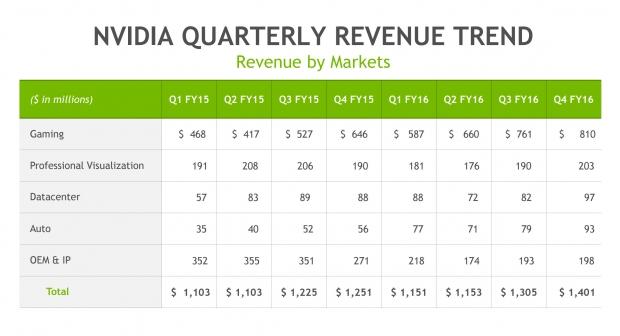 The company experienced growth in all market sectors, with Gaming, Professional Visualization, Datacenter and Automotive sectors all growing well. If we look back at 2015, it was a massive year for NVIDIA. The company launched its Maxwell-powered parts in late 2014, riding that wave throughout 2015. The company commanded 76% of the discrete GPU market in early 2015, and later in the year NVIDIA secured a huge 82% of the dGPU market.

Jen-Hsun Huang, co-founder and CEO of NVIDIA said: "We had another record quarter, capping a record year. Our strategy is to create specialized accelerated computing platforms for large growth markets that demand the 10x boost in performance we offer. Each platform leverages our focused investment in building the world's most advanced GPU technology".