Motorola teamed up with Verizon on two new smartphones that were unveiled at a press event in New York City yesterday, where we were introduced to the new Droid Turbo 2 and Droid Maxx 2 smartphones.

Starting with the Droid Turbo 2, which features a 5.4-inch AMOLED display with a 2560x1440 resolution (540 PPI). The display has Motorola's impressive ShatterShield technology (check out the video above), which truly protects the display from shattering if you drop it, on every surface. Inside, it rocks Qualcomm's Snapdragon 810 processor at 2GHz, 3GB of DDR4 RAM, and either 32GB or 64GB of storage, expandable through a microSD card.

We also have a 21-megapixel rear-facing camera with an f/2.0 aperture, phase detect auto-focus and dual-LED flash that is capable of recording 4K video at 30FPS. Up front, we have a 5-megapixel shooter with a wide-angle lens. There's also dual-band 802.11 a/b/g/n/ac Wi-Fi with MIMO, Bluetooth 4.1 LE and NFC technology.

There's also a huge 3760mAh battery, which Motorola promises up to 48 hours of average use. The company also provides its TurboPower charger in the box, which is capable of charging your new smartphone with 13 hours of battery life in just 15 minutes. Motorola has also splashed its Droid Turbo 2 with a water-repellant coating that should keep your handset protected from accidental spills. Unfortunately, the Droid Turbo 2 only ships with Android 5.1.1 Lollipop.

Switching over to the Droid Maxx 2, which packs a 5.5-inch 1920x1080 display (403 PPI) and is protected by Gorilla Glass 3 - not the impressive ShatterShield technology that the Droid Turbo 2 rocks. Inside, we have a Qualcomm Snapdragon 615 processor at 1.7GHz, 2GB of RAM and 16GB of storage expandable with a microSD card slot.

The same 21-megapixel snapper from the Droid Turbo 2 is featured in the Droid Maxx 2, as well as the 5-megapixel front-facing camera, 802.11 a/b/g/n/ Wi-Fi, Bluetooth 4.0 LE and NFC. There's a 3630mAh battery that should provide around 48 hours of mixed usage. The same water repellent is found on the Droid Turbo 2, and a Android 5.1.1 Lollipop. 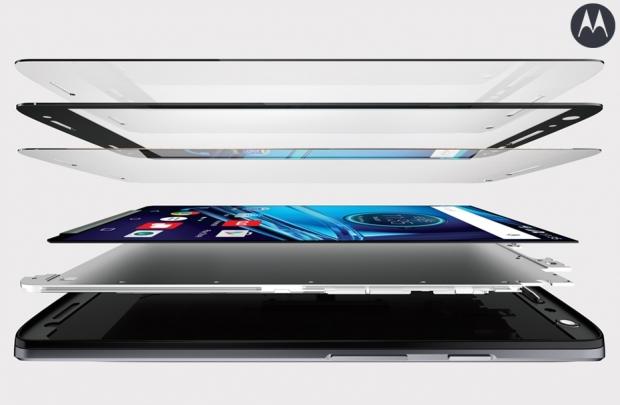