Even though the Xbox One is in Microsoft's limelight, the console-maker is keen on keeping last-gen gamers happy with new updates and improvements. The latest of which sees Microsoft quadrupling the Xbox 360's cloud storage up to 2GB of extra memory space. 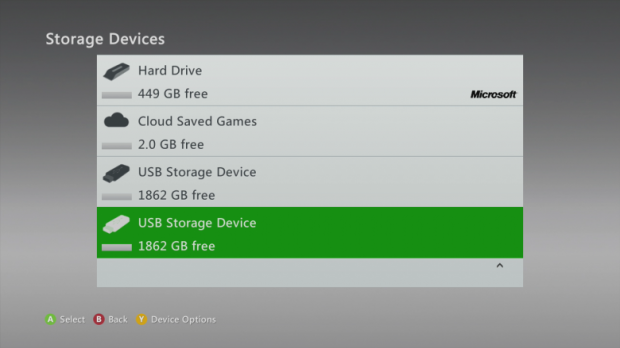 While 2GB might not sound like a lot, it will definitely come in handy when backward compatibility comes to the Xbox One in November. Users can upload their Xbox 360 saved data to the cloud and retrieve it on the Xbox One, allowing you to pick up right where you left off.

Plus the extra storage is great for things like migrating profiles and save data between consoles. Plus it's always great to have extra space to store data if you ever fill up your HDD and have to move files and games around. 2GB won't hold a full Xbox 360 game or a digital download with Games With Gold, but it will hold up most Xbox LIVE Arcade games, save files and some of your epic Halo: Reach clips.

Also in case you're wondering why Major Nelson has two 1862 GB drives in the screenshot, the Xbox 360 now supports 2TB external HDDs.

The Xbox 360 update also adds a new Activity Feed that lets players like, comment, share friends activities and interact with one another across Xbox One and Windows 10. Before now Xbox 360 owners couldn't see what their Xbox One friends were up to, and now the platform has been folded into the new system.

Check out Major Nelson's update for complete details on the Xbox 360 update, and it's available to download right now.