LG has unveiled quite the unique offering at IFA 2015, with a massive 111-inch double-sided, 4K OLED-based TV. The 111-inch TV is made capable using three 65-inch 4K OLED displays, allowing viewers to watch both sides of the TV simultaneously. 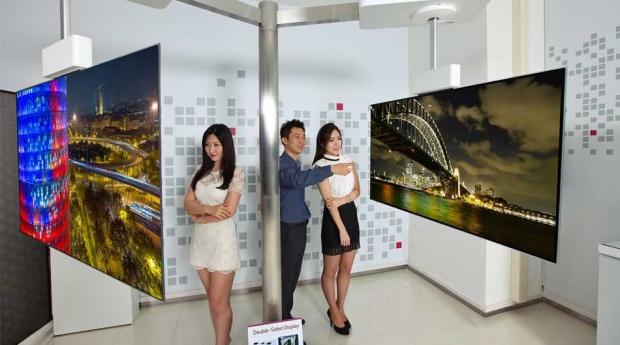 The company also displayed a new 55-inch version of its double-sided TV, which is just 5.3mm thick. But who would use a double-sided TV? Consumers wouldn't, but for businesses and signage, it could be something worth looking into. One of the pioneers of OLED technology, Dr. Ching W. Tang said during LG's keynote presentation at IFA: "Without backlight and other auxiliary layers, the OLED display is fundamentally less complicated compared to LCD, and in time less costly to manufacture".

The South Korean electronics giant also teased a super-thin 55-inch OLED display that is under 1mm thick. This is more of a wallpaper OLED TV, given its incredible thinness. Tang added: "I have no doubt, given its advanced features and superior performance - foldable, wearable, flexible and transparent, OLED is the display technology for the next generation".