Square Enix recently revealed the official release date for sci-fi wonder Deus Ex: Mankind Divided, but the celebration was dampened with a strange pre-order scheme that could have a huge impact on the future of the games industry.

The studio's neo-noir augmented dystopian sci-fantasy Deus Ex: Mankind Divided looks to be one of the best games in recent memory, and it now has a release date of February 23, 2016. Unless enough people pre-order the game--then it'll release four days earlier on February 19, 2016. To get the game early a good portion of gamers will have to pay up front and everyone gets the game early...this time.

In the future might be different. What if there are actually two release dates for games: the early pre-orderers who acted like early adopters in a weird sort of Early Access for AAA games, and the regular joes who get access to the game later. If this kind of disparity is created it'll likely eschew an exodus towards pre-buying as the mainstream public will probably want to get their game as soon as possible--it's the same price, right, so what's the big deal?

The new face of pre-orders

The studio is effectively attempting a Kickstarter-esque round of funding without the structured environment of a fundraiser, but this isn't new--studios have been using pre-orders to fund games for quite some time now. In theory Deus Ex: Mankind Divided's "augment your pre-order" initiative sounds harmless; it just lets gamers get little extras if certain stretch goals are met. But if this trend catches on, it could create a very skewed base where gamers are pressured even more to gamble on a game they've never played. An early launch pre-order bonus is much more persuasive that small DLC skins from GameStop.

Here's how it works: when you pre-order the game, you get to pick a reward for every tier is unlocked. More tiers are unlocked as more gamers pre-buy the game. There are four tiers, each of which offers incremental goodies:

Tier 5 (available for everyone)

The whole thing seems like an interesting and appealing mechanic, especially if you planned to pre-order the game anyway. But for the wary gamers out there, these kinds of schemes set off a red flag, especially since you have to lay down the full $59.99 and pre-buy to get access to the "augment your pre-order" extras.

This sort of thing isn't new; we've seen it in Call of Duty: Advance Warfare's Day Zero edition, and in massive failures like Driveclub, Halo: The Master Chief Collection, Assassin's Creed: Unity, and the Watch Dogs fiasco. The reason to stop pre-ordering games goes on and on.

Pre-orders have been described as a "free loan", and rightly so, as the territory has become distinctly high-risk. Even games that were seen as safe bets like the PC port of Batman: Arkham Knight turned out to be huge mistakes. As a result of these disasters, the gaming community largely distrusts pre-orders and makes conscious initiatives to "vote with their wallets" to hit the companies where it hurts.

Now the publishers have to step up their game. We've seen these companies try all kinds of tricks like microtransaction-laden freemium games, pay-to-win schemes, the dreaded season passes, platform-exclusive content, etc. Most of these things remain lucrative money-making schemes that power the industry, but now that pre-orders might be compromised, it's time to think of something new.

For the most part the retailer-specific pre-order bonuses of the past are negligible and honestly don't offer any real incentive, but Square Enix hopes to ramp this concept up with a strange Kickstarter-like fundraiser that takes the risk to a global level. And if the studio is successful, this tiered pre-buy scheme could become the new norm for studios and publishers everywhere. Companies are always looking to copy any sort of scheme as long as it rakes in money. 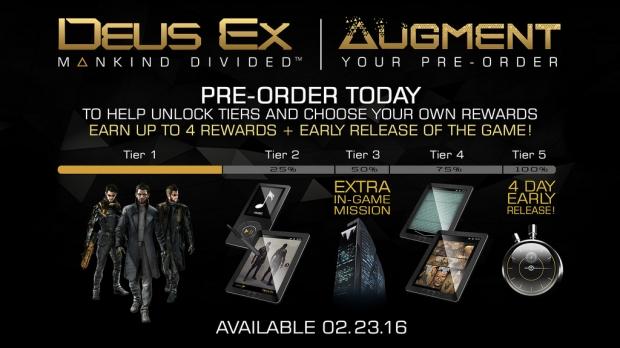 One of the more troubling trends is the patented pre-order-and-delay maneuver that that's been perfected by big-name studios. First open up pre-orders instantly after a game is announced--we're talking the second a reveal trailer is live--so people can shell out big bucks after being sold on the bullshots. Build up hype for a few months with more teasers, screenshots, interviews etc, and then issue a delay. This way the devs buy themselves more time to not only raise excitement but also collect even more pre-orders. Don't have enough cash? Simple. Just delay the game again.

No one knows if Deus Ex: Mankind Divided will be good or not--hell we don't even know if each platform will even be able to play it on launch--and that's really the gamble that gamers face in this situation. No one knows for sure, but despite that, we're supposed to watch a few trailers and check out screenshots and drop down $59.99 in good faith.

Square Enix makes great games, and Deus Ex: Human Revolution was one of my personal favorite games in the last generation, so it's almost a given that Mankind Divided will continue this legacy. But there's always that chance it could crash, and that spectre of uncertainty isn't the fault of gamers, but of the hard lessons the industry has taught us.

With any luck, this global pre-order scheme will die out on the vine. If it's successful it could mutate into something truly ridiculous like an extra tax to receive the game early--pre-order and cough up $69.99 to get a game 10 days before its launch, or maybe even a month early. It might be a stretch to speculate so deeply, but then again it really isn't.

Remember Evolve's insane price-gouging DLC? For a more current example, look at Destiny's new $40 The Taken King expansion, or even the previous underwhelming expansions; these games feel like simple experiments run by publishers to see what makes money and what doesn't. We all know that the industry will continue to find more creative and persuasive ways to get our money, and we'll continue to see even more experiments before the big new moneymakers stick.

This new fundraiser model may not be as daunting as it seems, and the initial run isn't really anything to be worried about. What's worrisome is the precedent it could create and what it could lead to. Hopefully I'm wrong. But if the past (and present) are any indicator, the world of pre-orders is about to get a whole lot more coercive.