We have been posting AMD Radeon news all week, but as we get closer to the announcement next week, the details become more clear. VideoCardz.com has posted some 3DMark FireStrike results, showing that the Radeon Fury X can keep up with the Titan X from NVIDIA. 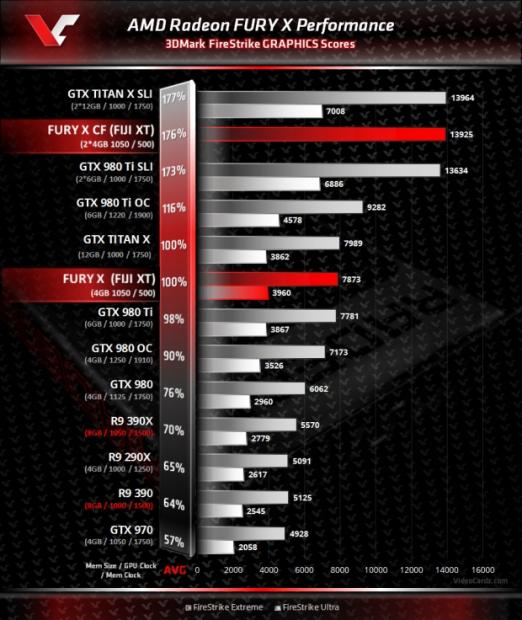 As you can see, the Fury X scores 7873 while the Titan X is just a tiny bit better with 7989. The NVIDIA GeForce GTX 980 Ti is only a little bit behind Fury X with 7781, but it's the CrossFire performance that we should be looking at. Two of the HBM-powered Fury X cards in CrossFire push out an incredible 13,925 - but still ultimately lose out to Titan X in SLI with 13,964.

The Radeon Fury X will feature 4GB of High Bandwidth Memory on a 4096-bit memory bus, the first video card to ever be released with HBM. The CrossFire scaling on Fury is is pretty damn good, sitting at around 176% - but most dual GPU setups in synthetic benchmarks always push 150-180% scaling. It'll be interesting to see the CrossFire scaling on more mature drivers, in actual games.