This morning at 6AM, DICE officially released the Naval Strike expansion for Battlefield Premium members, but the launch did not go as expected. Only those on consoles got the update, and DICE says that the PC launch has been delayed due to a major bug that was found shortly before launch. DICE did not give any indication what the bug was, and did not give a timeline on when PC gamers can expect the expansion. 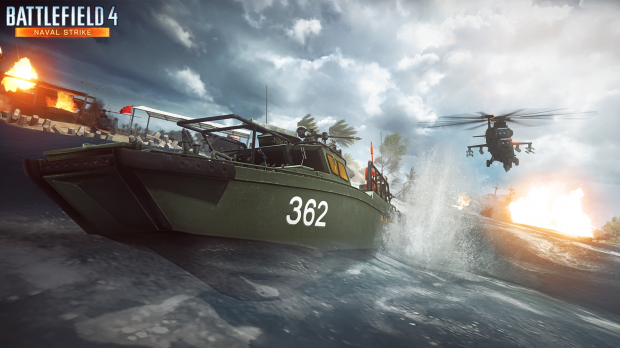 "On March 25, Battlefield 4 Premium members on consoles will be able to experience the ultimate sea-to-sea warfare in the third expansion pack for Battlefield 4," DICE said in a statement. "Battlefield 4 Naval Strike takes the intense and dramatic water-based combat introduced in Battlefield 4 to four all-new maps set in the South China Sea while introducing a new game mode and vehicle."

"However, we are delaying the launch of Battlefield 4 Naval Strike on PC. We've detected an issue and it needs to be solved. Quality is our number one priority and we will not release Battlefield 4 Naval Strike on PC until we feel it meets the highest quality level possible," the release continued. "Once we have a confirmed date for PC, we'll be sure to update those players on our official channels. We appreciate your patience and look forward to seeing everyone on the Battlefield."

As someone who has been pumped up for over two weeks about Naval Strike releasing on PC, this news does annoy me slightly, but I would rather DICE fix the issues before release than issue a patch later. So on this one, I am giving DICE props for not releasing a broken DLC with a promise to fix it later, but choosing to not launch on the flagship platform until everything is perfect.