Fujitsu is showing off a cool prototype tablet at MWC 2014 that has haptic feedback tech inside. The tablet is able to allow the user to feel smooth and rough surfaces on the screen with their finger. That means if a picture has smooth and rough parts, you can actually feel them. Fujitsu is showing off a demo of this tech with an image of an alligator that lets you feel the bumps on its hide. 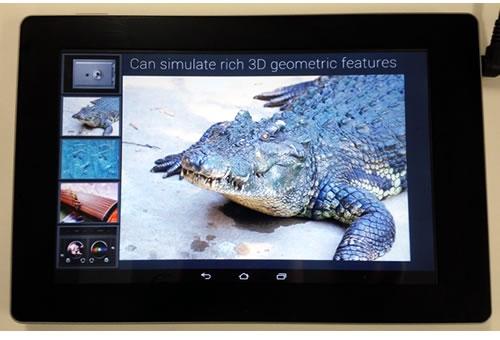 Another of the demos Fujitsu has is of a harp that lets the user feel the strings as they pluck them. The way the tablet is able to create the haptic feedback is by using ultrasonic vibrations. The vibrations produce a high-pressure layer of air above the screen that acts as a cushion for the finger.

When that cushion of air is there, the screen feels very smooth. By alternating the air cushion quickly, Fujitsu is able to produce the feel of a rough surface. The technology has been miniaturized to the point where it can fit inside a tablet and run off the amount of power available to mobile devices.

Fujitsu says that the tech has a wide range of potential uses like electronic product catalogs and other services. I think it would be a great way to give some tactile feel to virtual keys on tablet and smartphone keyboards. Fujitsu hopes to have the tablet tech commercialized by fiscal 2015.