While I found the whole show quite contrived, it did have several funny moments thrown in. The humor didn't come naturally, but it still managed to get the occasional laugh. If you've ever been to Disneyland's Innoventions Dream Home, you'll probably understand what I mean by that.

I understand that Samsung wanted to keep people's attention. They had to try and make the show entertaining, especially since they allowed basically anyone to attend. They managed to play to both audiences by having the master of ceremonies say something simple: "The new phone looks and feels awesome." A person they called an "elaborator" expanded upon what he said: "That's because its slimmer, yet stronger." 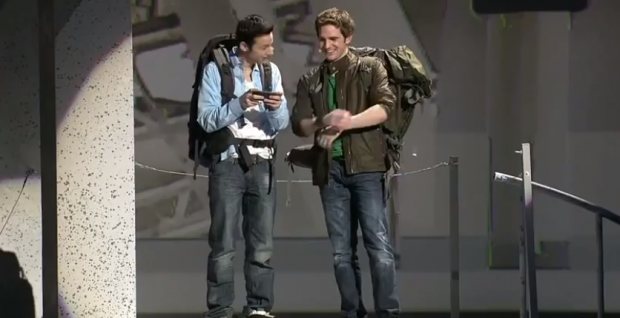 The scenes that rose from the floor were somewhat entertaining. They did this as opposed to pre-recorded videos. If you've ever watched an Apple press conference, you'll know the type of video of which I speak. Samsung would have been able to do a bit more with the scenery if they had recorded videos beforehand and I think this might have added to the event.

But, enough of my thoughts. If you watched the livestream live or the video embedded above, let us know what you thought of the press conference. Entertaining? Weird? Something else?