Details surrounding Huawei's new Emotion UI aren't plentiful or clear, but we do know somethings. Samsung, HTC, and now ZTE all have custom user interfaces for their Android phones so it seems as though Huawei doesn't want to be left behind. As such, Huawei is now working on a UI called Emotion UI, likely for ICS. 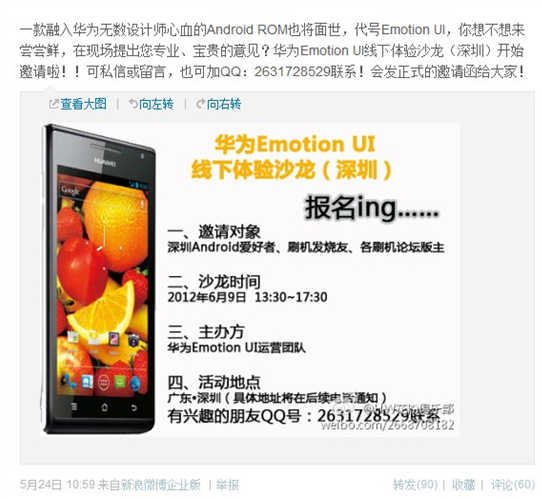 Considering the other manufacturers' UIs works on Ice Cream Sandwich, it makes sense that that is what Huawei will be targeting. The new UI will be unveiled June 9 and will become available sometime in July. Updates will be pushed to currently shipping Huawei Android phones so that they will get the new user interface.

Functionality of the new UI is not clear. Huawei is using words such as "emotional," "simple," and "smart" when describing it, but that doesn't exactly tell us that much. This UI also may not make it out of China, although it could as Huawei is trying to become a global manufacturer. The only downside to this custom UI is that updates will now take longer when new Android versions come out.