This means that all three of the mighty Apples have fallen to the Jailbreak community.

The new Jailbreak is not without its issues, as of right now it only works with Windows XP and Windows Vista. Windows 7 and OSX users have to wait a little longer.

You might also have to run it a couple of times before it works (I had to run it four times.) Once purplera1n is done you then have to run freeze to install Cydia. This is another one that might need to be run more than once.

Reboot after running freeze and you are good to go with your Jailbroken iPhone 3G S!

Some are saying that you have to restore in DFU mode and run purplera1n again to get it working. 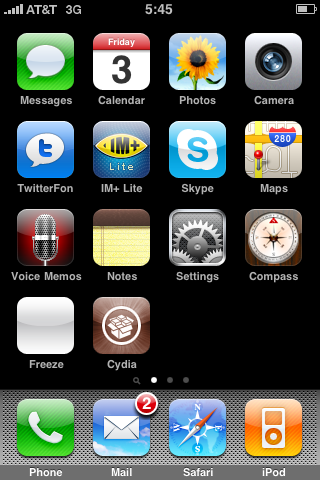 Update, I also want to add that the Chronic Dev Team was a major player in the new Jailbreak, I forgot to mention them in my first draft.

If you have a jailrboken 3G S go and give them some thanks! @chronicdevteam @p0sixninja
Newsletter Subscription