One of the most common slurs that are thrown towards people that love football management simulation games is that they may as well be looking at excel spreadsheets. Whilst it's true that almost the entire time you are crunching numbers and figuring out just how to build your team, there is a certain something about management simulations that keep bringing people back for more. The satisfaction of building a team and going on to win serious silverware is something that people have had flowing in their FM veins for years now.

It's just something that's hard to describe, but once that addiction hits you, it's hard to walk away. We recently took the 2013 version of Football Manager for a spin and are happy to report that not only is this game looking the goods so far, it could be the most important version for a number of years due to the introduction of the new FM Classic mode.

One of the biggest problems that Football Manager has had in the past is that it can virtually take over your life. It is an incredibly in-depth game that if you really get into it can lead to very long nights and a situation where you are constantly trying to think of how you can improve your team. In many ways this shows just how perfect this has been as a simulation of football management. The top level managers no doubt face the same problem, but of course they get paid to take on that level of stress! 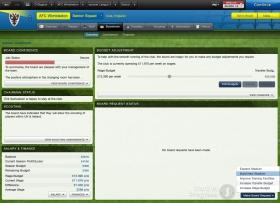 So it is with great delight we can report that the game now has a classic mode. In FM Classic, the game mirrors that which we have seen recently on iOS and Android devices. A cut down version of Football Manager that takes a lot of the 'meat' of the main game away and instead streamlines the game to a point where you can still walk away from the computer at a sane hour each night. However with that said, FM Classic still remains a challenging experience and it's not a situation where Sports Interactive has made it "Press Y to win", far from it.

What FM Classic does is take a lot of the areas of Football Manager that a lot of people may have ignored in the past and just thrown them in the trash. No longer are matches affected by pre-match team talks (because you don't need to do them), the board is a bit lighter on you and you may keep your job just that little bit longer and how you respond to the media does not have as significant impact on the team as it does in the main, full featured mode.

We played through a season of FM Classic and found it a very authentic experience. In the past most of the time we have at times allowed the coaches to take on training etc so to not have to deal with this on an individual level and for the game to focus on what most managers would want to, is just a masterstroke of game design and really opens this game up to those who may want to play Football Manager, but have always been scared by its ridiculous (in a positive manner) level of depth.

The interface for FM Classic has been overhauled as well. The UI used for FM Classic is closer to that seen on the portable devices and feels a lot cleaner and modern. It is entirely possible that hardcore managers may want to jump into FM Classic just to use the more streamlined UI. The game also tries to give you some hints as to what you as a manager should be doing. If you are in a contract negotiation phase with a player, the default button selected will be 'offer contract' rather than a long drop down menu.

This allows players who are not overly familiar with Football Management, to give the game a go and have an enjoyable experience whilst the game teaches them the ins and outs of the simulation. Perhaps the best example of this is the match plan which works a bit like a flow chart. Instead of having to determine this on the fly, you can enter instructions such as 'if I am losing at half time, change to 4-3-3' formation and the game will automatically do it. It is absolutely brilliant.

FM Classic also has a challenge mode which allows you to complete an FM game even quicker. Instead of taking on a team for numerous seasons, you can choose to take on an injury ravaged team for example and try and keep them from being relegated in the second half of a season. And there are also some things which can be unlocked by playing FM Classic such as the ability to turn off being able to be sacked by the board. Something fans of the lower league teams have clamoured for in the past.

For those who prefer the full game that we've all come to know and love there has been major improvements here as well. In fact some of these improvements may lead to people trying FM Classic because the complexity and depth of management, especially at the international level is being overhauled to take into account even more factors. You now have to deal with the taxation systems of each nation.

So for example if you are managing in England it may be more difficult to attract a star player away from an area such as Dubai due to the higher tax rates. As well as this, some players take on a much more mercenary feel with demands for money and wages instead of loyalty over the long term the norm. Of course you still have the boy who grew up as a local lad and wants to play for the local team, but the added challenge of tax really makes transfers more difficult this time around.

And in international management you need to deal with a lot more real-world factors as well.

Managers who do not want their stars to go off to matches on the other side of the world make life difficult for you, and the intensity of media speculation and reporting is through the roof. This really is the 'extremely difficult' mode of Football Manager this year. You only get to see the players every couple of months, and their club form can greatly affect how they play in the international matches. It's exactly what real-world international manager's deal with, and it's easy to see why those guys are always under pressure, just by playing this game.

Other areas that people (including myself) have wanted to see improvement in has been overhauled. Transfer deadline day is now an absolute insane day with bids flying in for players and contracts being negotiated. If you are the manager of a smaller club with good players you have to wait it out and hope that big teams don't come looking for your players, whilst on the flipside with the big clubs you are offering contracts, managing transfers and in general very busy. This is one of the main modes biggest improvements in terms of giving the real-world management feel.

And finally (although at the time of writing we had been unable to play a network game), multiplayer has had an overhaul as well with Sports Interactive identifying where some of the biggest problems with the game lay, and putting in steps to fix them. First of all before a match you can now determine how that match will play in terms of speed and how many highlights etc will be displayed to ensure sync between users and you can now even create your own custom competitions rather than having to take on a major league (which can be time consuming). Network mode also now allows you to use a team from the single player mode in the network mode which adds even further depth to the single player mode, allowing you to build up a team and take on everyone. We expect this to be extremely popular once the game is released.

Visually the game has had an overhaul as well. Not only has the FM Classic interface been introduced, but the 3D Match engine has had an overhaul as well. The game looks a lot cleaner and more fluid with the players on the pitch, and from appearances, the animations have been significantly improved as well. You can now also customise the UI of the 3D match engine a lot more as well and gain information from other matches in progress live. This is especially important on the final day of the season if you are in a title dog fight or relegation battle.

Football Manager 2013 is introducing a lot of features that people have wanted for a while, whilst also adding features to make the simulation even more realistic. It goes without saying that Football Manager 2013 is a significant improvement on last year's product and it could very well be that FM Classic mode becomes one of the most significant and important additions to the series for years. If you love FM, things are looking good, but this is also a year where those who have moved on to have kids and jobs can really get back into the game as well. FM Classic is the perfect addition to the perfect football management sim. We cannot wait for the final game. FM Fans, worry not, Sports Interactive are on the right track to deliver yet again.