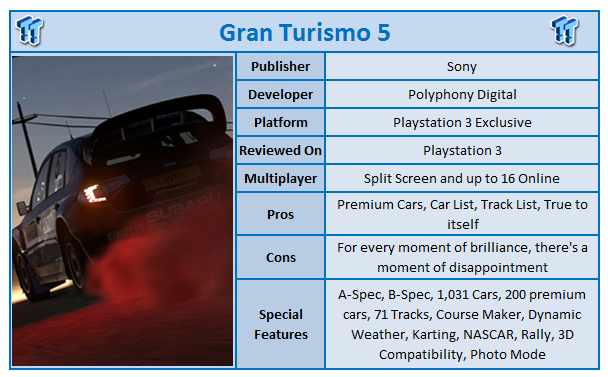 There's really no need to give a run down on the Gran Turismo series. Even if you've never played the series and this is the first one you're looking at, the chances are you're going to know about the series anyway.

Gran Turismo 5, as the name suggests, is the fifth major title from the series. It's not the fifth Gran Turismo game, though, with a few iterations of the series being seen throughout the years (the most recent versions being GT 5 Prologue and the PSP version known simply as Gran Turismo).

There's some numbers that are seriously going to impress. 6 years in the works, 26 different track locations, over 56 Million copies sold in the GT series, 71 tracks, 1,031 cars and up to 500,000 polygons on car models. These are impressive numbers and numbers that can't be taken away from Polyphony Digital. 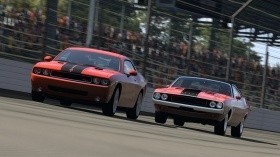 After the wait we've had; sliding Gran Turismo 5 into my PlayStation 3 is a real surreal moment. It's hard to believe that you're about to fire the game up and see an intro movie that you know will be fantastic. Oh how wrong I was; six years and I have to wait over 30 minutes for a patch coming in at just over 100MB. Still, once that was done it was time to get into the game. Oh, denied again; an 8GB install to the hard drive which took in excess of 30 minutes.

I knew eventually I would get there; and eventually I did. I saw that intro movie which after about 15 seconds I skipped, instead to enjoy at a later time. The first thing we do is set up our character by picking a racing suit. We then get into the menu which is quite all over the place. Visually it's quite stunning, but everything feels a little messy. I noticed as time went on, though, you get used to it and really it's easy enough to navigate. You spend a lot of time here and there's a huge amount of options, so it's nice not to just have a row of text saying 'Dealership, Races' etc. 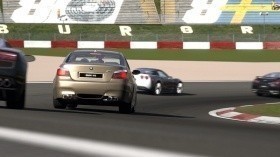 The first thing I did was buy a car and then get into the licences. By the time I finished the first set of licences I had been gifted a few other cars and never ended up driving my used Golf that I purchased.

Once I'd done some licences I attacked the "Special" races or Special Events and here is the area where a giant smile just comes to your face and you discover the areas that make the Gran Turismo series so special. Our first option is Karting; yes, Karting, and to sum it up in a word, it's AWESOME! - Once you've had a blast doing that you can take the new NASCARs for a spin in NASCAR School with Jeff Gordon. It's fun, it's something new, but it's not a real highlight for me due to the simple fact I'm not really a big NASCAR fan. I did complete the initial drafting challenges, though. 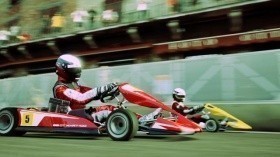 Next it was on to the Top Gear track and this was the first time I felt the same excitement I did when I inserted the disc. I was about to be the Stig in my sexy gold racing suit. I was going to be the power lap setter; I was going to cut Gambon at the last second; it was going to be all about me. Well, so I thought.

Instead I felt like I had just pi**ed off BBC and Jeremy Clarkson and my punishment was a 12 van VW Combi race. The pain! This wasn't how I wanted to experience the Top Gear track, struggling to hit 62 MPH, struggling to overtake; there was nothing special about this event. I pressed on and eventually got Gold.

With frustration set in from racing around in slow vans for what felt like hours, it was time to do some A-Spec racers. There are really no surprises here as we start in the beginning category. You've got stupid A.I. that brake too early and are content on following a standard race line for the most part. Unfortunately the A.I. doesn't really change throughout the game and it's one of the biggest issues with not just GT5, but the series on a whole. 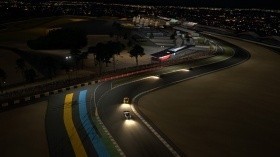 The completion of these races can be as easy or as hard as you want really, with "FF Races" or Front wheel / Front Mounted engine races being done in any FF car. With no restrictions you're able to slap on huge power upgrades and just blitz the competition. It's going to be a little disappointing to some, but it does help build some cash up and get into the cars that you'll probably want to drive.

B-Spec mode brings with it a driver that's completely hopeless to start with, but does manage to get better over time. Telling your driver to maintain the current pace or overtake is always a bit of fun, but the biggest benefit to B-Spec is the ability to gain money so you can again drive those cars you want.

Outside of the racing which on a whole is very Gran Turismo, you've got the presentation and both audio and video stretch from one spectrum to another. The inclusion of "Standard" cars which are re worked from Gran Turismo 4 bring with it this "Upscaling" like view. 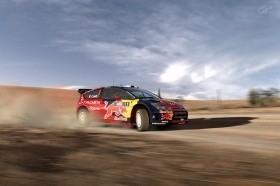 Premium cars on the other hand offer the most amazing detail right down to the bolts that keep your wheel attached to the axle; simply amazing. Audio quality is the same with a lack lustre feeling in some areas and then pure audio heaven in others with that beautiful roar from a V8.

Damage is really non-existent; well, that is for at least probably the first few days. The tier system, in which real damage is first seen at level 20 in A-Spec, and fully unlocked at level 40, means that initially you're not going to have expensive repair bills. As time goes on, though, that will change. The good news is that a patch is coming which will give you the ability to make use of these features in Arcade mode straight away. The bad news is that the top tier damage is reserved for only premium cars.

Karting, NASCAR and Rally bring with it a whole new dimension to the series and what's so great is that none of them feel slapped on. All instead feel like huge time and effort has gone into them to make sure they're as good as they could be. The same goes for the weather implementation. 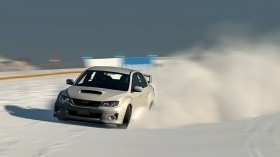 The biggest issue with Gran Turismo 5 is that for every moment of sheer delight and brilliance, there's also one of disappointment, and while I feel that it doesn't stop Gran Turismo 5 from being great, it does stop it from being as great as it could've been; which makes you wonder, was six years really needed to make this? - What you ultimately end up with is the feeling that you're playing two games; Gran Turismo 4 HD and Gran Turismo 5, the latter a game designed for the PS3 and made to make use of the power it can offer.

The 800 standard vehicles leave you with a bit of a sour taste in your mouth, but the 200 premium ones are just sheer delight. Some tracks are the same; quite bland, others look absolutely gorgeous and the audio follows the same formula with some cars just sounding flat when you feel they shouldn't, and others just sending a shiver up your spine as you hit redline. 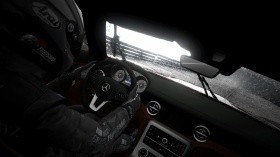 The inconsistency in Gran Turismo 5 is the biggest problem. Fans of the series won't care, others that have grown to love Forza as an alternative on the Xbox 360 will lean to the other side of the fence. Gran Turismo 5 can really sound as good or as bad as you want it to sound. You can continue to harp on about the flaws in a game, while the other side will push nothing but all the pros.

The series remains true to its simulation background and that's what helps set it apart from most other racers, especially on consoles. Some will love the game, others will hate it; at least it's finally here, though. And while it's not what we thought it would be in some areas, it's so much more in others.

It's finally here. We felt that GT5 was such a big game that two editors should have a look at the game and here are my thoughts. Initially you will be disappointed. You will wonder just what Polyphony Digital did for five years considering how close this plays to GT4. However, as the hours wear on and you invest yourself more into the game, you will notice what they did more and more.

For me the premium versus regular car argument is now null and void. You really only notice a difference when you are driving one as it does not have a cockpit view. Other than that, they look just fine when compared to the premium cars. One area where the game still falls down is the AI. They still bash into you without a care in the world and do not deviate from their original set of rules much in terms of avoiding hitting other cars and taking corners.

Where GT5 sees the most improvement is the level system. Rather than gain ridiculous amounts of cash to enter events with a good car, the game now has an individual level system which unlocks special events, a new to the series. The special events are what makes GT5, well, special. You can race in karts, take part in grand tours down the Italian coast over various events and even take some rally lessons from Sebastian Loeb. As you gain levels you unlock more and this is where I found I really hit something nice in GT5. I didn't find myself driving the same race over and over again to get cash like I did in previous iterations.

While GT5 is probably a bit of a disappointment in some areas, I believe that has something to do with the length of development. If something takes six years to make, you really want it to be something special and you have huge expectations, especially with a series as formidable as Gran Turismo. In terms of racing games, nothing comes close. Gran Turismo once again proves it is king of the racing genre and will be for some time to come.