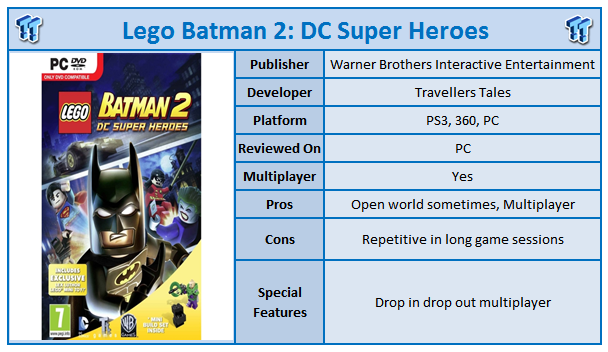 Who knew? Who knew that Lego could produce so many games in so many universes and be popular? Who knew that a company could produce as many games as Call of Duty and still be somewhat seen as fresh and original? Who knew Lego would translate so well into a game? Travellers Tales. This isn't their first foray into the Lego video gaming space, in fact by now they are veterans and this shines through in Lego Batman 2: DC Super Heroes.

This game is probably the best Lego based game they have produced so far because it takes all the best bits of previous Lego games in terms of mechanics and throws out the rubbish that people don't like.

Lego Batman 2 is set in Gotham City as you would expect, on the evening of the Man of the Year awards. The two front runners Bruce Wayne and Lex Luthor gather at the awards event and whilst the city is in lull, inmates escape from Arkham Asylum including the Joker to cause havoc on the streets of Gotham. With Lex running for President and voters falling for him, it is up to Batman and friends to show the people what Lex is really like and save Gotham City from itself. 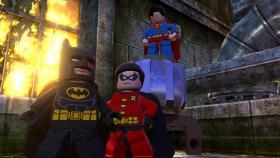 Lego Batman 2 in many ways keeps the tried and true Lego mechanics of the previous game. Generally you are in a mission, have to solve a few puzzles with the environment and take on a boss character. Where Lego Batman 2 differs is how you reach those missions and this is where the crux of the game exists. The main missions and storyline is only a taste test for what the game is really all about. Open world exploration.

Once you have finished the game you are free to traverse the open world of Gotham City how you see fit (and with whatever characters you have unlocked). This may sound like nothing new, but in a Lego game, it's a nice refreshing change. You can find Golden Bricks and new characters to unlock as you explore the world and there is many nods to the Batman universe present throughout.

As the name implies Batman is not alone this time around and a number of his friends come along for the ride. We won't mention any but Superman because that would spoil a large section of the end game, but what we can say is that the mechanics of the game and missions are such that is very obvious which character fits where. You have characters that can bend metal, fly, breath fire or ice or are just super strong to take down objects. As well as this, Batman and Robin can obtain suits that change their abilities. Knowing which suit to have at the right time is key to progressing far in the game.

Multiplayer is handled as it has been in the past with drop in/drop out gameplay allowing anyone to join the game at any time and end the game at any time. One thing we noticed is that the world itself generally does not change when in multiplayer, you just have to work a lot more as a team and communicate to solve puzzles; whilst in the single player you can easily just switch characters. One nice thing the local co-op play does is split the screen as characters move away from each other. If both are present on the one screen, one is shown, but if you explore the world separately then that separation is clearly shown by splitting the world into two visual windows. This is very handy for local multiplayer.

Although the game is clearly targeted towards the younger market, there is enough in here to get adults somewhat excited. First of all the universe is represented extremely well, even in Lego form and the humour is biting and funny. More than once we laughed out loud at what was happening on the screen although Travellers Tales have somewhat toned down the level of humour in this game. They have tried to go for a more serious take in this game and it works. One interesting fact is that the Lego characters talk this time around. This leads to strong story development and much more interest in what is going on. This is the first Lego game I have actually wanted to finish and see through rather than feel like I had to finish it.

In terms of its visuals, the cuteness of the Legos shine through again. Travellers Tales have turned taking a game universe and turn it into Lego into a fine art and that again rings true with Lego Batman 2. The characters are cute and the world is represented well. One thing we would have liked to see is a bit more variety in the mission structure as well as the world itself. Considering the action takes place over a single night, it's hard to see how they could achieve that, but it can lead to repetitive gameplay. The voice acting is well done and as mentioned before is surprisingly good for a Lego game.

Lego Batman 2: DC Super Heroes is no doubt the best Lego game that Travellers Tales has made so far. They have learnt a lot from the multitude of Lego games that have come before this one and it shows. Lego Batman 2 is the game where the formula really comes together. Where the elements combine to make a fantastic game and one you should definitely have a look at.