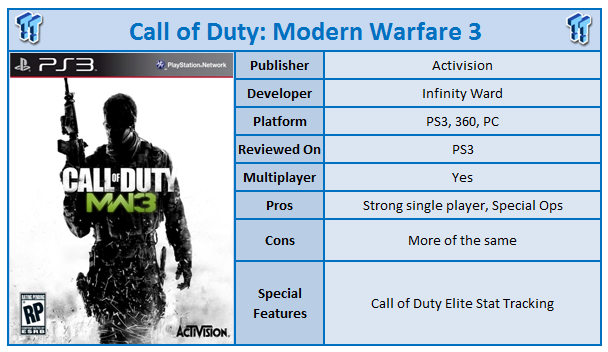 If there is any game bigger than Call of Duty from the past five or so years, we'd like to see it. There is no doubt that Call of Duty, and especially the Modern Warfare series has had a significant impact on the gaming industry and developers have been trying to crack what made Call of Duty such a success for Infinity Ward. But the development of Modern Warfare 3 had its issues. First, the two leaders of the Modern Warfare project left Infinity Ward in acrimonious circumstances and then there were rumors the project was seriously behind deadline. However, the game did make its release date and is here now and whilst it remains very much the same as the previous two Modern Warfare titles, it proves there is some petrol left in the engine yet. 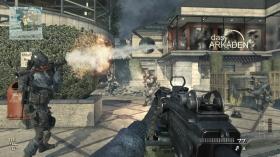 Modern Warfare 3 picks up right after the end of Modern Warfare 2. Soap is left fighting for his life and Price remains an international fugitive. But the big problem is that Makarov is back and has managed to get the Russian army and country on his side. This kicks off World War 3 and it's up to Price and Soap to restore order between the Russian and US Governments. Whilst the story can seem over the top at times and the world would really have to turn upside down for the events to happen, it does prove that this style of story works, especially when compared to Battlefield 3 (which had a shocking single player campaign).

Modern Warfare 3 from moment one to the very end is an extraordinary display of explosions and action. There cannot be more than five minutes in the entire campaign where it slows down and starts blowing things up. This is the crescendo the first two games were building towards and it explodes in an orgasm of structures blowing up and explosions going off. Modern Warfare 3's campaign is complete cheese and of the popcorn variety. By this we mean the game has almost zero depth, but the campaign is enjoyable to play.

Throughout the campaign you will visit some of the world's most famous landmarks and cities. For those of you who have visited either London or Paris, you are in for a treat as you recognise the architecture which has been reproduced in the game plus battling around some of the cities' most prominent landmarks. The game still runs with a very fast pace giving the action even more of a flow and one thing they have fixed since Modern Warfare 2 is hidden enemies. Many times in Modern Warfare 2 you seemingly got shot from nowhere, but we never felt that to be the case in Modern Warfare 3.

Along with the campaign, the Special Ops mode returns with a few additions as well. Many of the missions focus on those from the campaign and you now unlock those missions by gaining special ops levels rather than earning stars as per the previous game. Special Ops remains one of the series' best features allowing you to either offline or online play a game that will last at maximum five minutes. There is a real pressure during Special Ops to get things done quickly and against almost insurmountable odds.

However, with these additions come the unlocks from the main multiplayer mode. As you level up you will gain access to more weaponry and so this means a lots more time needs to be invested into the Special Ops mode this time around. This is not necessarily a bad thing, but it does not carry over to the main multiplayer game where you will be wanting to spend most of your time.

Not much has changed on the multiplayer side of things, but not much really had to. You still level up and gain perks and extra weaponry by doing so and again this rewards those who play the game more than others. However, one big addition is Call of Duty Elite, Activisions paid for service for the Call of Duty games. Call of Duty Elite, even in its free mode is an interesting addition and something that adds quite a bit to the world's most popular multiplayer game. You can check out your stats, view maps to try and build a strategy plus also watch videos showing you how you may improve your game. For veterans of the game you will find the main component of COD Elite to be the stats, but for novices there is a lot of worthwhile information present within the Elite section of the game. Over time this may become even more of a useful feature with DLC almost assured for Modern Warfare 3.

One area where the game is starting to show its age is the graphics engine. Whilst they get the job done and continue the game at sixty frames per second, when compared to something such as Battlefield 3 they do not compare. The environments still feature epic set pieces and many vehicles on the screen at once for example, it still is a little disappointing that the graphics we originally saw in Modern Warfare 1 are still present today. The voice acting and sound work gets the job done, but as has come to be expected in a Call of Duty game, the script is not that great and there is a few clangers in there just to make you realise how much of a cheesy game this can be.

Call of Duty Modern Warfare 3 continues to do a lot right, but really, for a fourth iteration if it is to happen then major changes need to occur, else the game risks becoming stale. Towards the end of the campaign we did feel it was dragging on a bit (the campaign is definitely longer than Modern Warfare 2) and all the loose ends are generally tied up by MW3 so we are hopeful they will move on from it. Multiplayer still remains the benchmark and it's hard to see it being toppled at any point soon. 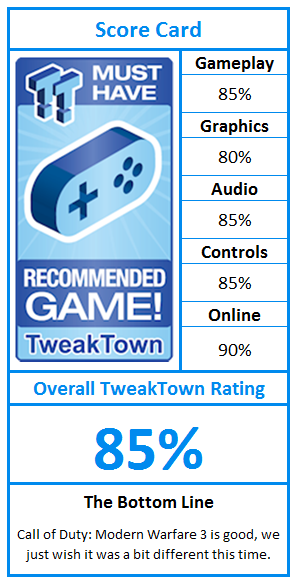