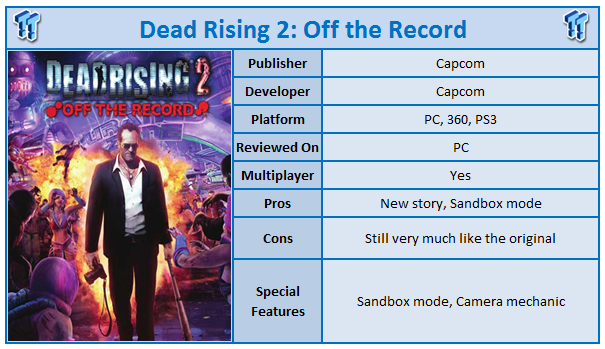 When Dead Rising 2 was first released, the game was met with critical acclaim and high sales, but there was something that always disappointed gamers - a distinct lack of Frank West. Frank West was the cooky journalist present as the protagonist in the original game and has become such a popular Capcom character he has appeared in multiple games since and had his own missions for Dead Rising 2 released.

Seeing an opportunity, Capcom has gone back to the Dead Rising 2 story and placed Frank in the game for a re-release. However, Off the Record is not your typical re-release with the story showing a different side of what happened in Fortune City that fateful few days.

Dead Rising 2: Off the Record starts off very much like the original game. Terror is Reality, the most popular television show on the planet suffers sabotage where a member of CURE releases a bomb to free all the zombies used on the show. Slowly those zombies take over Fortune City and the survivors gather in the shelter waiting for the army to arrive. Frank makes it his duty to discover what really happened (he is a journalist after all) as well as free as many survivors as he can. 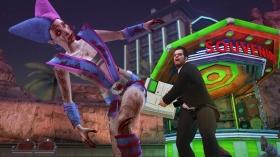 It's not long into the game before you discover one of the primary changes for Off the Record, the camera mechanic. As Frank goes about the story of Dead Rising 2, you can take photographs of zombies and people doing things to earn PP points (which are used to level your character up). This popular mechanic has returned from the old game and makes it interesting to seek out all the quirky things you will find in Fortune City.

Aside from this, the game itself is pretty much the same. Frank slots well into the storyline present in the original game and whilst it does present another side of the story, the cut scenes and the presentation of them are extremely familiar. There is still three days before the army arrives to save you, and you have to gain as many survivors and finish tasks before those three days are up.

The main missions of Off the Record are not where most of the fun is found. That can be had in those missions which are optional - the side missions. You can be helping a lady who is continuously vomiting, through to taking out a bunch of rednecks having fun shooting all the zombies with sniper guns. Every turn you take in Fortune City leads you to something weird.

To take down the zombie threat, Frank can pick up almost anything in the game world to smash them with. Be it a oversized champagne bottle or chair, this is what makes Dead Rising 2 so much fun to play. And there are literally hundreds of zombies on screen at the one time. We were playing this on a fairly modest PC and it ran fine, so most people should be able to have the graphics set high without any problem.

Along with the main game, Off the Record adds a brand new game mode which is a sandbox. For years gamers have asked Capcom to put a free roam mode into the game and they have this time delivered.

Frank can jump into the world and just start smashing things up without having to worry about time or missions that need completing. And just to make the game even better, a number of new combination weapons have been included and a new section has been added to Fortune City, although it does not add too much.

Multiplayer remains the same where you can play co-op with another gamer online to take on the horde of zombies and there are some side tasks to try and complete as well. Multiplayer in Dead Rising 2 is quite enjoyable and this remains the same in Off the Record.

There has been no real improvement to the visuals of the game since Dead Rising 2, but that was to be expected. Overall, for those who haven't played the game before the graphics are in a cartoon style and work well enough in the game. It's not the kind of game that will push your graphics card to the limit, but it gets the job done. The voice acting in Off the Record can seem grating and unrehearsed which is puzzling, because in Dead Rising 2 it came across quite well during the game. We aren't too sure what has changed since then.

Dead Rising 2: Off the Record is an interest experiment. Capcom is not pricing this with the normal pricing structure and that is a bonus to the game, but it still may not be enough, especially if you have already finished Dead Rising 2. If you are clamouring for more Dead Rising, the game does deliver, however there probably isn't enough here to justify a second purchase, unless you are a huge fan of Frank West. We still think this should have been a high priced DLC pack for the original game rather than a full retail remake.