All NewsBusiness, Financial & LegalCases, Cooling & PSUContests & GiveawaysCPU, APU & ChipsetsDealsDisplays & ProjectorsGamingMotherboardsScience, Space, Health & RoboticsStorageVideo Cards & GPUsVirtual & Augmented Reality
All ReviewsAll ArticlesAudio, Sound & SpeakersCases, Cooling & PSUCPUs, Chipsets & SoCsComputer SystemsDisplays & ProjectorsGamingMotherboardsNetworkingPeripheralsRAMStorageVideo Cards & GPUs
GuidesGamingAsk the ExpertsNewsletterAboutPrivacyForums
AMD Zen 4Intel ArcBattlefield 2042RTX 3090 TiRTX 4090RTX 4080GTA 6Elon MuskHDMI 2.1
For those in PAL territories, No More Heroes was quite the non-event. Released a significant amount of time after the US release, the game did not garner the attention it probably deserved. With this in mind, the publishers have sent the game worldwide much quicker. We went into this game expecting a quirky and fun romp; what we found was one of the most crazy, interesting and whacked out games that we have played in a long time, and that can only be a good thing.

In NMH2 you once again play as Travis Touchdown, a cool, hip young guy who is a hit with the ladies. Travis is also an assassin. The first game saw him reach the status of number one assassin, but for one reason or another in the years since, he has dropped back down outside the top fifty and it is your goal in NMH2 to reach that number one spot again. The timeline in between the two games is actually not filled at all and comically skipped over with a cut scene during the start of the game. Travis talks about how going over the past two years will probably bore the gamer and considering that NMH doesn't have the strongest story, he is probably right. 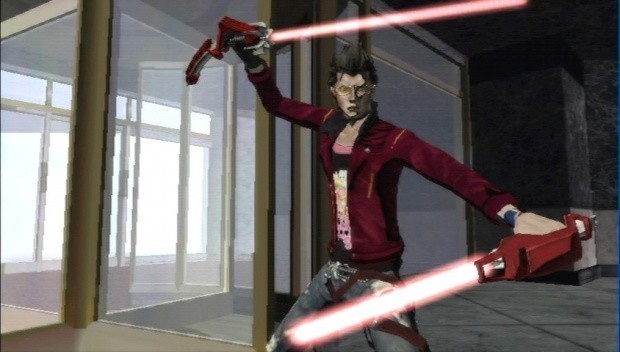 At its core, No More Heroes 2 is a fighting and action game, but there are enough side distractions to keep the game going. The goal in the game is to go through and destroy the assassins ahead of Travis to reach that number one spot. You can take them on one by one without doing anything on the side, but quite quickly in the game the challenge amps up and you look to side jobs to gain money. So the core game revolves around gaining money through side jobs to buy better weapons to then take on the next boss character for the story to progress.

There is absolutely no doubt that No More Heroes 2 is an adult experience and not for kids. The women have bouncing and over-exaggerated breasts and skimpy clothing on and the camera tends to focus on the more attractive areas of those girls. Aside from this, the game is full of swearing and the overall storyline is quite mature as well. It's interesting to see such a hardcore, adult game on the Wii and in fact the game shines on the Wii for a number of reasons,
primarily because of the control scheme.

Although we recommend having a classic controller to play through NMH2, using the wiimote and slashing is entirely possible. The camera can become very annoying and focusing on the enemy can be tough, but overall it's palatable. Where the game starts to get frustrating is some of the boss fights. Many times we felt that they were being 'cheap' rather than us having the wrong strategy. You can be about to finish off a boss and they will pull off some ridiculously crazy move and start to belt Travis to kingdom come. It is then you want to smash controllers. 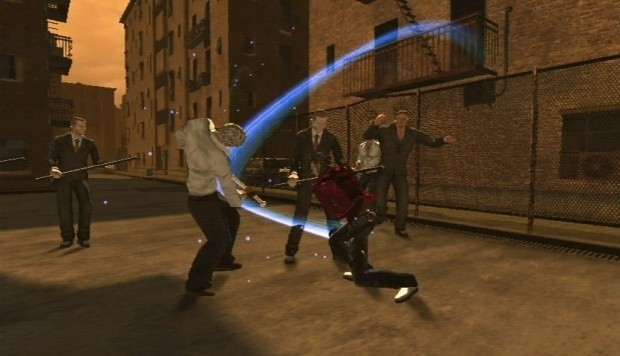 The biggest improvement to the game since the original is the travelling and side modes. In the previous title you had to race around on your bike moving between jobs which became quite boring and repetitive and the jobs were not that great. For NMH2 they have built 8-bit NES style video games to play to gain cash. This is infinitely more enjoyable and upgrading your weapons no longer feels like a chore. As well as this, there is no travelling with movement between locations down with a top down map of the city.

The gameplay does get mixed up quite a bit as well. If you were expecting a ten or so hour romp of running, hacking and slashing, you will be disappointed. Instead the developers have taken the repetitive nature out and mixed up the boss fights. To give an example, one of the fights has you fighting as a giant mech vs. another big creature in the middle of the city. It is this variety that keeps NMH2 from becoming stale. 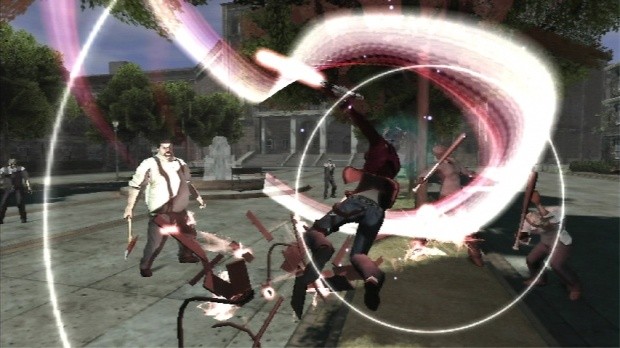 Despite being on the Wii, the game is somewhat visually impressive. The visuals are not going to compare to the HD world of Xbox and Playstation, but they fit the game well. The developers have realised the limitations of the Wii and worked with it rather than fought it. Colourful cartoon style graphics are the order of the day here and comical style animations are in place. The game just flows well and due to the lower graphical fidelity, the frame rate never skips a beat. Voice acting could be improved, but overall is an adequate performance from the Western actors/actresses.

No More Heroes 2 is a hardcore game on the Wii and in a rare stroke of fortune, a very good one. The game is whacked out and crazy, but that adds to the charm that is NMH2. Travis Touchdown is a fun character to play and the missions are interesting and varied. If you own a Wii you should check this one out.