All NewsBusiness, Financial & LegalCases, Cooling & PSUContests & GiveawaysCPU, APU & ChipsetsDealsDisplays & ProjectorsGamingMotherboardsScience, Space, Health & RoboticsStorageVideo Cards & GPUsVirtual & Augmented Reality
All ReviewsAll ArticlesAudio, Sound & SpeakersCases, Cooling & PSUCPUs, Chipsets & SoCsComputer SystemsDisplays & ProjectorsGamingMotherboardsNetworkingPeripheralsRAMStorageVideo Cards & GPUs
GuidesGamingAsk the ExpertsNewsletterAboutPrivacyForums
AMD Zen 4Intel ArcBattlefield 2042RTX 3090 TiRTX 4090RTX 4080GTA 6Elon MuskHDMI 2.1
The Ghostbusters theme song is one of those movie themes that transcends generations. There would not be many people in the western world who would not associate that famous song with the ghost fighting team. It is twenty years ago this year that Sony unleashed the four bumbling Ghostbusters upon us through the means of cinema and twenty years later we have another video game which on the surface carries through the theme of Ghostbusters well, but it is not without its problems.

The best way to view Ghostbusters is a best of. In fact, both the developer and actors from the film consider this the third movie and it is not hard to see why. The storyline may be new, but from the start to the end you will re-enact some of the most famous scenes from both movies and come across many famous characters including Stay Puft, the most famous of them all. For those living under a rock or perhaps a bit too young to remember this fighting team, that's the marshmallow man. It is fair to say, however, that the story is not one of the games strong points.

The game is played from a third person perspective and you take the role of a new rookie into the team. The other characters including Egon and Venkman take great pride in reminding you of this time and time again throughout the game, despite the fact that your character ends up doing most of the ghost capturing and dangerous tasks. Most of the time you either travel in a group of four or two, but occasionally the game does split you apart and you have to take the ghosts on one on one.

There are a few things that make the third person perspective work. Like Dead Space, the developers have used the actual graphics on screen to display the current status of the character and proton packs. For example, the proton pack changes colour depending on which proton stream you have currently selected and the characters health is displayed on the proton pack as well. This definitely draws you into the Ghostbusters universe and the subject matter being the movies have definitely been viewed many times by the development team as many of the camera cuts are exact replications from the films.

However, as mentioned before, the game is not without its problems. The game seems to struggle in its own universe. The cut scenes and character discussions are definitely complete fan service, but for those not as familiar with the series it would be hard to understand and many times boring. We found ourselves skipping cut scenes due to their length and the inane script. As well as this, you will very quickly discover that this game is about two minutes of fun which repeats itself from beginning to end. Find ghost, hit ghost, trap ghost, find boss, trap boss. From start to end that is basically what you do and for the fans it's perfect, but not necessarily the most enjoyable or interesting game around.

Also, the game is moderate in length. You can finish it in about six hours which considering the repetitive nature of the title is not necessarily a bad thing. There is not much replay value, however, the game does allow you to replay missions over and over again, should you so desire. One plus is that the voice acting and characters are direct from the film with people such as Bill Murray reprising their characters purely for this video game.

We also found the controls and complexity hard to keep a hold of. There are a number of streams for your proton pack and each scenario and situation demands a different stream. For those who are accustomed to complex controls, this is easy, but we can't help but feel that the casuals who pick this game up will get stuck. The other problem is that the game is not very good at telling you what to do next. Every so often the characters will just stand there and you will have to stand in an exact spot in the level to trigger the next cut scene or progress; annoying to say the least.

One area the developers have excelled is the visuals. The characters are just like the films right down to the detail on the proton packs and the replication of the most famous scenes such as Stay Puft at the Sedgwick hotel and the Public Library are done extremely well. However, it is a shame that in the intense sections on the PS3 the frame rate does suffer a noticeable hit. The effects from proton packs are done well, as are the actual ghosts. As mentioned earlier, the voice acting is passable at best (that said, most characters are voiced by the actors from the films, quite a feat considering twenty years has passed) and aside from the famous Ghostbusters theme song, the soundtrack is nothing special.

Ghostbusters PS3 took its time to arrive with a number of publisher changes and legal mumbo jumbo. The wait has definitely been worth it to fans of the series, but anyone else, especially the casuals, will quickly realize that this is a complex repetitive game and a missed opportunity. There is a lot of plus sides to this game and they have captured the universe of the series well, but overall it is a disappointment and a rental at best.

You can currently pick up Ghostbusters for the PS3 over at Newegg for 46.99 U.S. Dollars which includes shipping. 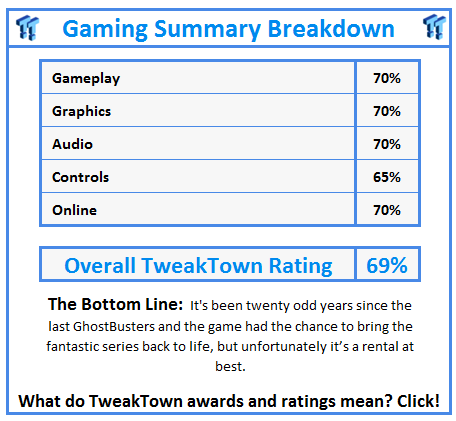