All NewsBusiness, Financial & LegalCases, Cooling & PSUContests & GiveawaysCPU, APU & ChipsetsDealsDisplays & ProjectorsGamingMotherboardsScience, Space & RoboticsStorageVideo CardsVirtual & Augmented Reality
All ReviewsAll ArticlesAudio, Sound & SpeakersCases, Cooling & PSUCPUs, Chipsets & SoCsComputer SystemsDisplays & ProjectorsGamingMotherboardsNetworkingPeripheralsRAMStorageVideo Cards
GuidesGamingAsk the ExpertsNewsletterAboutForums
RTX 3090 TiRTX 4090Diablo 2GTA 6Halo InfiniteElon MuskRTX 3080HDMI 2.1
The Resistance franchise has had an up and down time over the past few years. Tagging along with the launch of the PS3, the first game became one of the most anticipated and successful titles of the launch period. Last year the second next-gen game emerged to mixed comments. And to me that mixed impression was justified.

Now we have the portable version looking to restore the series to its former self and while the PSP game does have problems, it is one of the better titles on the system because the developers have worked with the limitations of the system, rather than try to overcome them.

Resistance Retribution fills in the storyline between the first and second PlayStation 3 games. You play as James Greyson, a British soldier, sentenced to death after he abandoned his unit due to the infection and subsequent death of his brother during the war with the Chimera. After the Chimera invades Europe and advances rapidly, Greyson is given a pardon and asked to fight with the French resistance teams. While the storyline is nothing to write home about it, definitely has its moments. 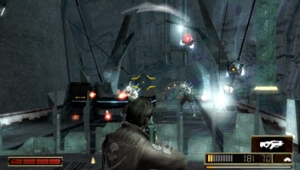 The biggest difference between portable and console versions of this series is that this is played from a third person perspective and it just works. While many developers have tried and failed to build worthwhile first person shooter games on the system, the developers here have worked with the limitations. That is, they have used a third person perspective (which on a smaller screen is much easier to see) and have employed a system to get around the fact there is no second analogue.

The game has an extremely heavy use of auto-aim assist. Basically, if the target is on the screen and the reticule is somewhat near, it will lock on and you can blast away easier. This also applies to multiplayer which you would think be a problem, but due to the fact everyone has the same conditions, it also works well. The face buttons become the second analogue in that they are used to control the camera. This system works well and the design of the game works with the controls, never really feeling frustrating. 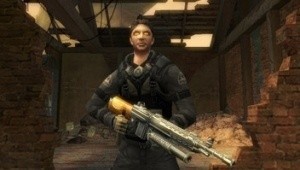 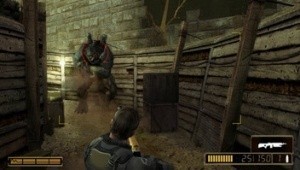 There is a sense of 'we've been here before' with Retribution and considering this is the third game in a series, it's not surprising. Unless you are completely obsessed by the lore of the series and the story, then the action is all it has. There is no doubt that had this been a console game, it would have become repetitive fast, but Retribution is designed for portable gameplay and with that in mind a quick bus trip or two shows how well designed the title actually is. With that said, there is a number of new things introduced to the series; two new enemies and some new weapons. As well as this you will find enemies from Resistance 1 and 2 present throughout which somewhat makes Retribution a 'greatest hits' package of the series so far.

However, there is one thing which we can not get over how this made it through QA. The first third of the game is incredibly dark. Paired with the PSPs non-ability to display very well in sunlight (well, up until the 3000 model at least), this makes the game extremely difficult to play. Once you reach a particular area this is no longer a problem, but we had to play this in a building rather then on the road to overcome this problem for the first third. 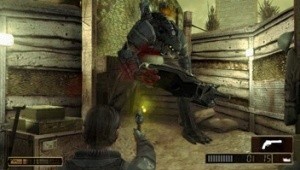 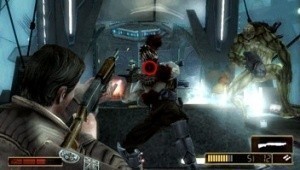 Another cool feature of the game is the link with Resistance 2 on PS3. If you own both games you can link them up and unlock a number of features. First of all, you can use your PS3 controller to play the game which turns auto-aim off and makes the game much harder. As well as this, while connected you can unlock the 'Infected' game mode where Greyson is infected with Chimera powers allowing him to regenerate health amongst other features. This obviously makes the game easier to finish and those who do end up owning both titles should definitely check this out.

One area where the game does shine is the graphics. There is no doubt that Resistance shows what the PSP can do and what its strengths are when compared to the competition. We only experienced frame rate drops a few times and considering how much action is generally on screen and how many enemies there are, this is quite an accomplishment.

The character models animate well and due to excellent level design you always seem to know where to go next to progress the story. Voice acting is top quality and on the level of the PS3 titles and the audio when played through headphones does the job.

Resistance Retribution was one of the most anticipated 2009 PSP titles. It has taken a successful console franchise and in keeping the limitations of the system in mind, the developers have come up with a system that plays well and is suitable for portable gaming. 2009 is looking big for the PSP system and with Retribution, Sony is off to an almost perfect start.

You can currently pick up Resistance Retribution for the PSP over at Newegg for 36.99 U.S. Dollars which includes shipping. 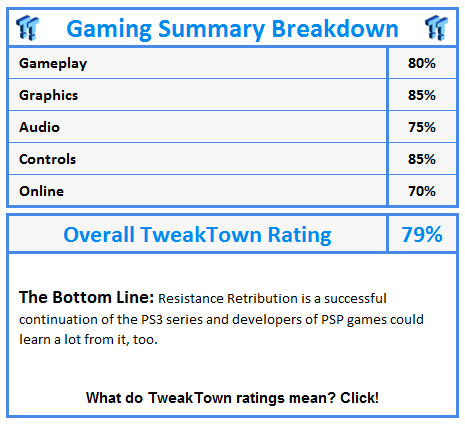