All NewsBusiness, Financial & LegalCases, Cooling & PSUContests & GiveawaysCPU, APU & ChipsetsDealsDisplays & ProjectorsGamingMotherboardsScience, Space & RoboticsStorageVideo CardsVirtual & Augmented Reality
All ReviewsAll ArticlesAudio, Sound & SpeakersCases, Cooling & PSUCPUs, Chipsets & SoCsComputer SystemsDisplays & ProjectorsGamingMotherboardsNetworkingPeripheralsRAMStorageVideo Cards
GuidesGamingAsk the ExpertsNewsletterAboutForums
RTX 3090 TiRTX 4090Diablo 2GTA 6Halo InfiniteElon MuskRTX 3080HDMI 2.1
The Nintendo Wii is constantly derided by hardcore gamers for having lots of shovelware and basically going after a new market. There is no doubt that the success of the Wii will change the face of gaming forever and Sony and Microsoft will factor the Wii's success into their next systems. SEGA recently has been trying to fight the good fight for Nintendo and release some hardcore style games. MADWORLD has had a lot of hype since it was first announced along with a lot of controversy. This was going to be the game for hardcore Wii owners and despite the fact it does have its problems, those who have shelled out for the Wii and don't want to play baby sitting games may find what they want in MADWORLD. 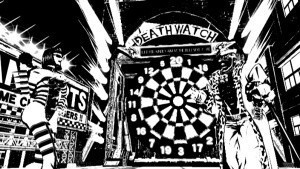 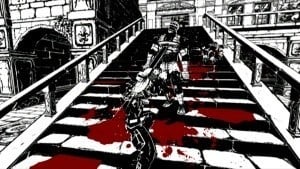 MADWORLD is full of cliches; in fact, the whole game is pretty much a big parity about how violence is portrayed in the media and the extent of violence which exists in today's world. You play as Jack, an ex-marine sent into Varrigan city to rid it of the scourge which has taken it over. A corporation has taken over Varrigan city to showcase Death Watch, a reality TV show where contestants must fight various enemies and then boss characters to build a ranking. As you might expect, this is where Jack comes in and while on the surface the story is cliche, there is enough twists and turns to keep it interesting.

The best way to describe MADWORLD is one giant sandbox of violence. At the start of each level you are placed into an environment and have to gain a number of points to unlock new weapons and the boss fight. There are also a number of mini games present throughout. MADWORLD is one of the most violent games ever made with the ability to pick up sign posts and slam them into enemies heads encouraged. If you just use your chainsaw the game sees that as regular violence so Jack has to work hard to impress his handlers. For example, to get a good score you may have to slam a pole into an enemies head, put a tire over them, pick them up and put them in a machine which has spikes. MADWORLD makes no qualms about its violence either with the word 'murder' present throughout. 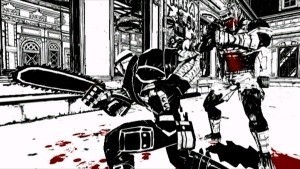 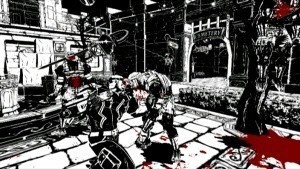 What takes MADWORLD to the next level is the Wii motion controls. Rather than button mashing to slam characters into walls, you move the Wiimote back and forth and I have to be honest, the first thirty or so minutes can be uncomfortable as you have direct interaction with what is going on. Once you get over the fact MADWORLD is a game, it is quite enjoyable but it is definitely not for everyone. MADWORLD is for adults and this is re-enforced throughout the entire game. Mini games such as the money shot where you throw enemies onto large model billboards with spikes are just one example of this.

The problem with MADWORLD is once you got over the visual and aural experience, you begin to see the cracks in the games. Its core revolves around you bashing characters, moving onto a boss character and then progressing. It does not change from start to finish. This is why it is unlikely that you would finish MADWORLD in one sitting, because it can get repetitive. There is no doubt the game reminds us more of games such as Smash TV than a fully fledged action game with a decent story, but this is not necessarily a bad thing. 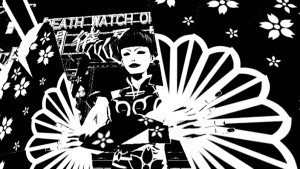 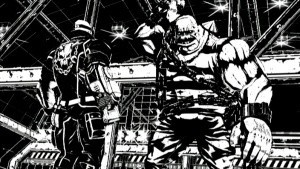 The difficulty level also ramps through the roof. During the first part of the game you will be sitting back thinking SEGA targeted the casuals by making it too easy. However, there is a point in the game where broken Wiimotes will occur. The game all over a sudden kicks it up to ten and you are constantly bombarded with enemies. Should you finish the game, a new difficulty level is opened up, making it even more difficult.

The visual style of MADWORLD was one of the key talking points during its development. There are four colours that make up the MADWORLD universe; red, yellow, black and white, but the stylised nature is a master stroke. The game is just an entire parody and the fact they did not go for a realistic style just re-enforces it. The game also looks stunning for a Wii game. Platinum Games obviously realised that the Wii can't do the best graphics so they worked with what they had and despite the fact the Wii is not a HD era console, if you put MADWORLD up against a top Xbox 360 game, then it would compare quite favourably in both the gameplay and graphics department; a feat not seen on the Wii before. 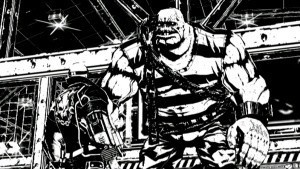 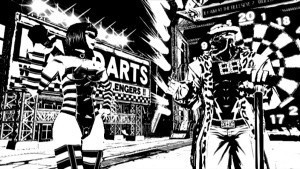 MADWORLD is a game that you will love or loathe and what you feel will depend on how you react to the over the top violence. There are people out there who will not be able to stomach the violence and gameplay, but for those who can, MADWORLD offers the most mature action on Wii yet and while it may not be a system seller that Wii fans would like, it does prove that the Wii can do mature games and do them somewhat well.

You can currently pick up MADWORLD for the Wii over at Newegg for 44.99 U.S. Dollars which includes shipping. 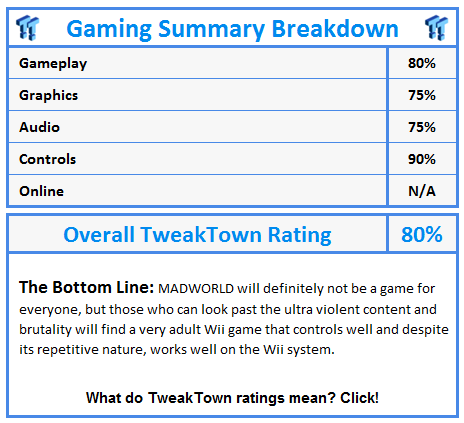