At the heart of any true HTPC is the TV Tuner - the whole source and reason for the machine's existence.

From bitter experience, I can attest to the fact that regardless of how much money you spend on an HTPC system, if the tuner is a dodgy one then you may as well not have bothered. It needn't be a problem with the hardware itself - perhaps the software drivers are buggy or badly-implemented. Either way, it's a world of pain.

So in looking at what products out there might make a good addition to your Digital Lounge, we're looking at two TV tuners by Compro and supplied by Anyware in Australia - the VideoMate T100 Digital Terrestrial TV Tuner Card and the VideoMate U500 USB2.0 DVB-T Stick.

We'll put both of them through their paces and try and work out if they should be added to your HTPC. 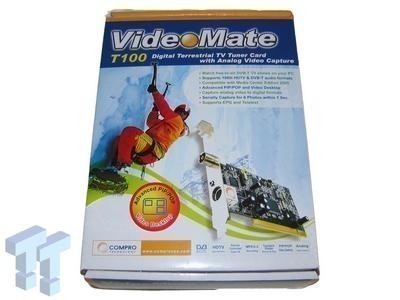 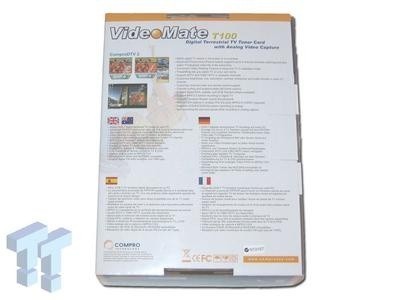 The card sports a silicon digital TV tuner with a Philips 9-bit ADC chip. It supports SDTV and HDTV up to and including 1080i. The card itself has three connectors - an I-type DVB-T input, an S-Video connector and an IR receiver connector for the bundled IR receiver. 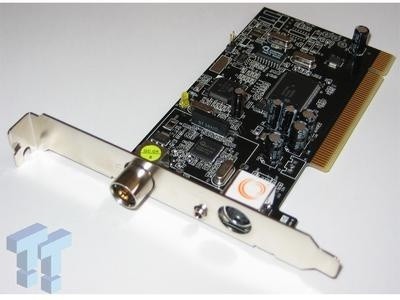 The T100 can capture video via the S-Video connector, using either an S-Video or composite video cable, neither of which are included. The card can capture from NTSC or PAL sources - it captures DVD at 3GB/hr, SVCD and 1GB/hr and VCD and 600MB/hr. Video capture formats available are MPEG-1/2 and 4, and the capture process supports pausing during recording and automatic split file size. 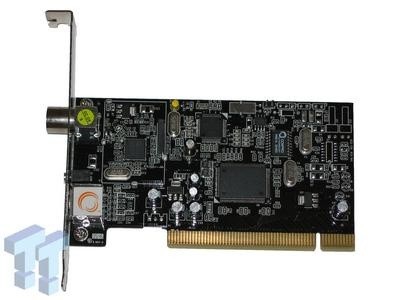 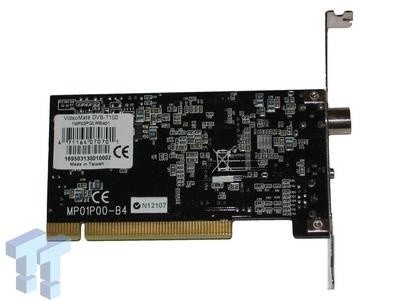 It supports PIP/POP with up to four screens running simultaneously (main window plus 3 subwindows) and you can set the TV screen to be the desktop wallpaper (although that might send your head spinning!). Each channel is customisable in terms of brightness, hue and resolution.

Minimum system requirements to operate the card and software are a 1.2GHz CPU for SDTV viewing up to a 2.4GHz CPU for HDTV and PIP/POP, 128 MB RAM, 50MB hard drive space, onboard/expansion sound card, GPU with DirectX9.0 support and Windows 2000/XP. 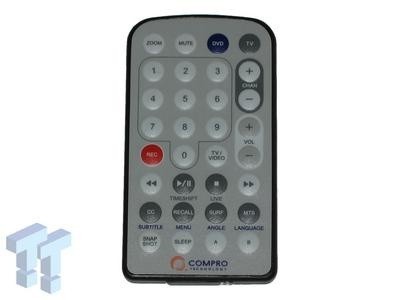 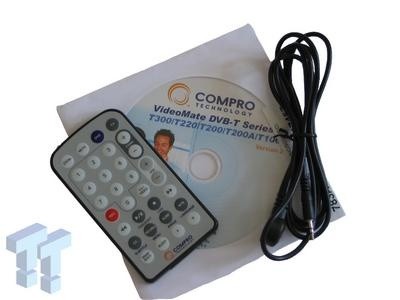 The bundle includes the card itself, installation CD which contains ComproDTV2, ComproDVD2 Ulead PhotoExplorer 8.5SE, drivers and manuals, a Start-Up Guide, IR remote control with batteries and an IR receiver cable. You can get a low profile riser for the card, but the box we received didn't include it. 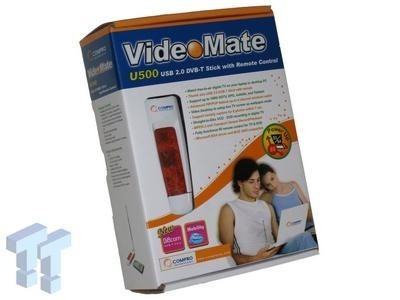 In terms of digital TV playback and recording features, it's almost identical to the T100 TV tuner - it supports SDTV and HDTV up to and including 1080i, PIP/POP in up to four windows, digital EPG, subtitles, teletext and language features, timeshifting, MPEG-2 recording and still frame capture. 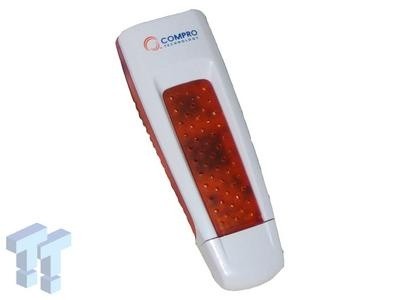 The main difference is that it features a DiBcom DVB-T chip, supports Straight-To-Disc direct TV recording to DVD and is Windows XP MCE2005 compatible. 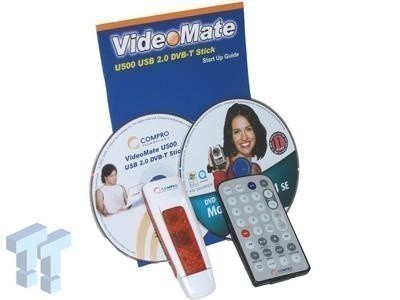 The system requirements are the same as for the T100, except that the U500 only runs on Windows XP SP2.


We tested by installing the tuners into the test system one at a time (ie: not running both simultaneously), installing the default drivers and version of ComproDTV2 which came on the install CDs, and connected the tuner to a wall antenna point (the U500 was also tested with the bundled mobile antenna).

The antenna wall point had been tested previously and signal strength was fine for HDTV playback.

Once ComproDTV2 was installed and launched, the application autodetects the capture device and audio device (soundcard) and then autoscans to build up a channel listing.

The T100 built up a channel list OK the first time ComproDTV2 ran, and we were able to surf between all channels without a problem. Opening all the subwindows using PIP and a different channel for each window caused some dramas, however. With each subwindow opened, performance within each window dropped substantially. The Compro website does state that for each window displayed, extra CPU power is needed, but the system we used should have been fine...possibly you need a VERY strong signal if you're going down this path, or better signal caching.

Then we ran into more problems - the system was powered off and back on, and suddenly the T100 had problems displaying any channel, stating that it couldn't find a signal. Signal strength was exactly the same throughout testing.

I uninstalled the driver and ComproDTV2, restarted the system and re-ran the installation. This time the autoscan picked up only 8 digital channels out of a possible 38 - those channels seemed to run OK, but no amount of rescanning could pick up the extras.

To be honest, I've noticed this before with different TV tuners in the past. Although signal strength is important, some devices are extremely sensitive to fluctuations in the digital signal and are unable to cope. The T100 was one of these - the performance when it detected the signal correctly was completely fine, but getting to that stage was very hit and miss.

The U500 on the other hand, performed excellently. All channels were detected and ran without a hitch, including after several system restarts. Opening multiple subwindows caused the same problem as with the T100. I then unplugged the wall connection and used the mobile antenna which comes with the unit. Instantly it lost all signal and I couldn't get it back, regardless of which way the antenna was pointing. Reconnecting to the wall got the signal back straightaway.

This is a potential problem with the U500 - it's billed as a mobile TV tuner, but digital TV is a finicky beast. It's not like analog TV where you can get a picture through a dodgy signal - if the signal is weak or inconsistent on digital you simply don't get anything. The U500's effectiveness is going to be wholly dependent on local coverage, and the best results are (not surprisingly) when using a wall connection. But then it's hardly mobile anymore, is it?

Both the units performed OK - nothing particularly spectacular. The U500 certainly performed better than the T100, so it gets the nod for consistent and clear playback (with all the warnings and caveats about using the mobile antenna).

The T100 isn't advertised as being compatible with XP MCE2005, which is a limitation for a card-based TV tuner. It does come with a Microsoft BDA driver though (Broadcast Driver Architecture), which should get it over the line. The flaky performance is a worry, however. You'd want to be very confident in your signal strength, given that the T100 seems liable to exhibit degraded performance at the drop of a hat.

As nice as the ComproDTV2 software is, it's not really suitable as the basis for an HTPC - the feature set is fine but it doesn't really integrate with anything else other than ComproDVD2. You really want any TV tuner to be fully compatible with a complete HTPC package like MCE or MediaPortal.

More worryingly is that you can't find any reference to the T100 on Compro's Support site. There are no updated drivers available for download - the nearest products are the T200 and T300. These drivers do work for the T100, but you can't help but get the impression that Compro isn't taking this particular product any further.

The U500 performed well, and IS MCE2005 compatible, but it seems strange to use an external USB device as the main capture device in an HTPC unit. It really is much more suited to computers on the move (notebooks) - and considering that that's how it's advertised, it's not such a bad thing!

So I'd have to state that although these products are fine standalone products (with the U500 clearly outperforming the T100), neither of them would sit well in a home theatre environment. For casual, ad-hoc TV watching on a non-dedicated system, the U500 is an excellent choice.