The 480GB BPX Pro from MyDigtialSSD is one of the best 512GB class NVMe SSDs shipping today. This is the second capacity we've tested and it's performance in relation to other products on the market is more competitive than the 960 GB model that has to combat the HP EX920 1TB. The 500GB EX920 and similar Adata SX8200 are not as fast in this capacity and that opened the door for MyDigitalSSD to take the performance lead. 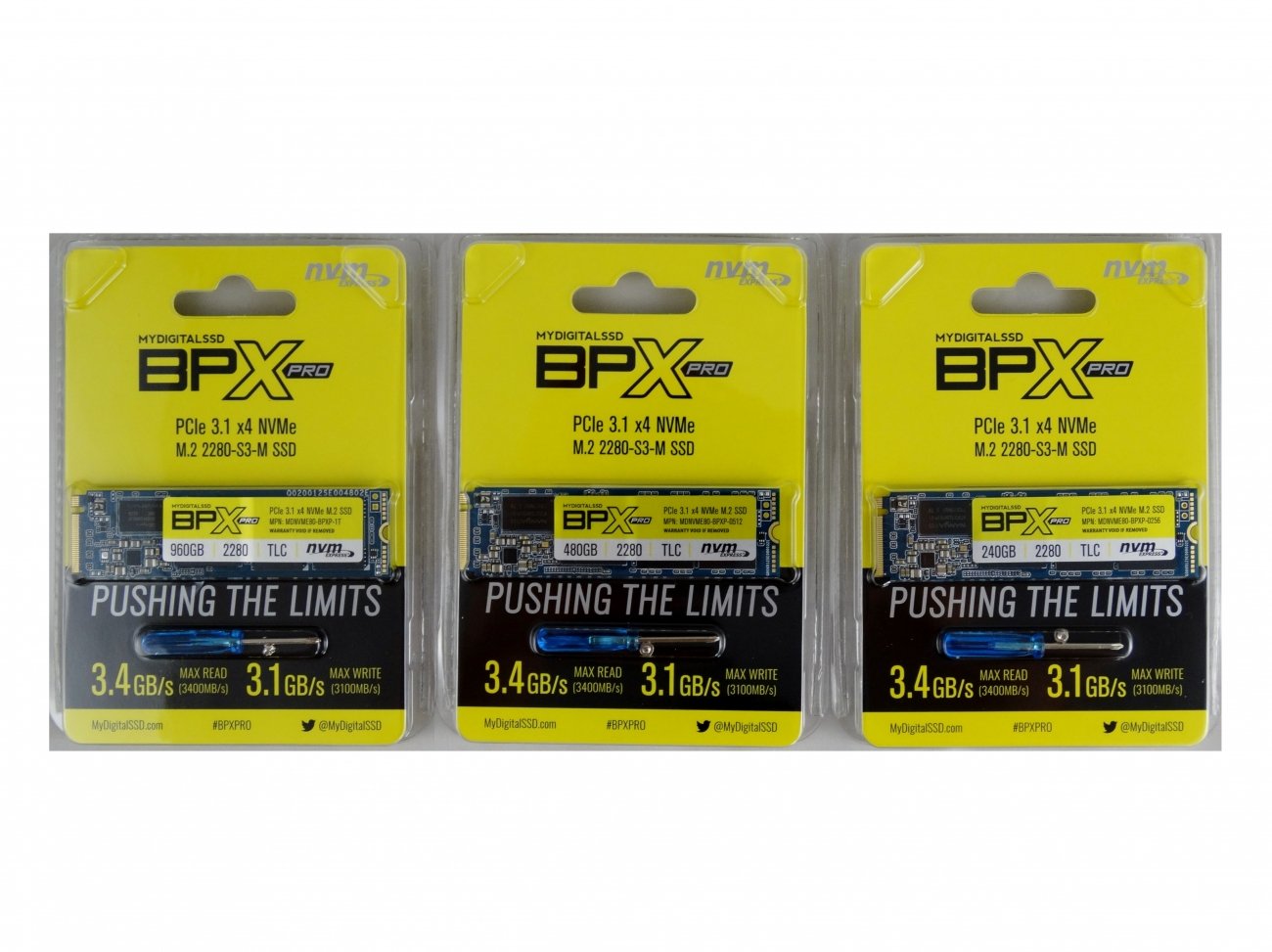 We gave a very detailed account of MyDigitalSSD and the new BPX Pro in the 960GB drive review. We urge you to read it to get the full scope of the history, current market, and forward outlook of NVMe SSDs.

The short recap includes MyDigitalSSD ticking off several companies by releasing competitive products at low prices. To do that the company has a small advertising budget, low staff expenses and overhead, and a streamlined process.

Let's dive right into the review and look at the BPX Pro 480GB.

MyDigtialSSD measures claimed performance with CrystalDiskMark so the random numbers come in the form of throughput. In our testing, we measured around 13,000 IOPS at queue depth 1 and for most desktop workloads that's the number you care about.

Even though the BPX Pro is the first product with the new Phison PS5012-E12 (E12 from this point forward in the review), we've shown performance previously in tradeshow coverage and preview articles that detail the architecture and hardware specific features. 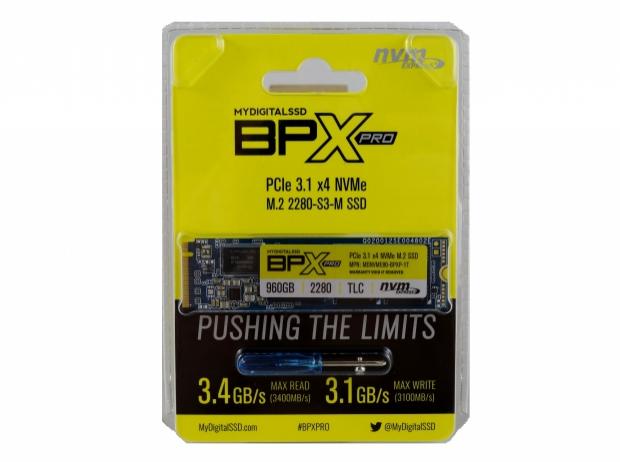 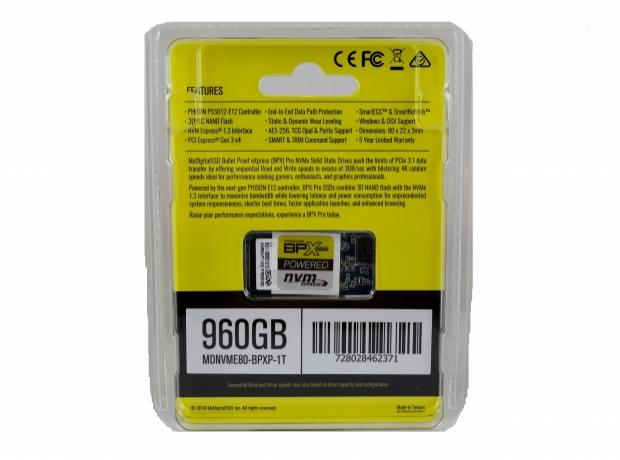 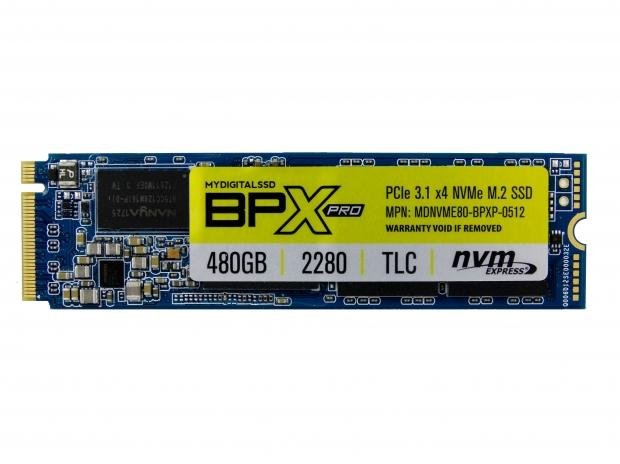 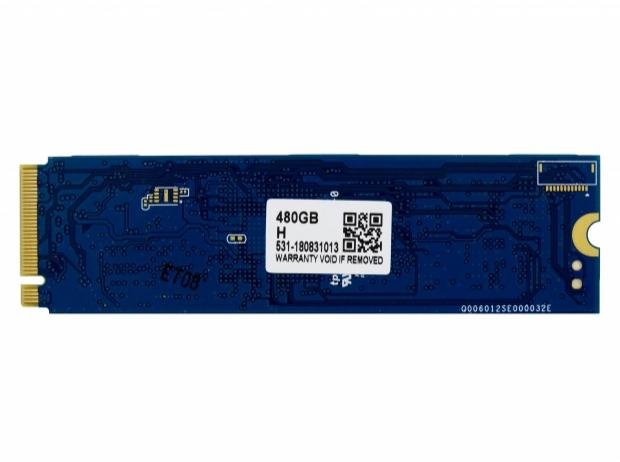 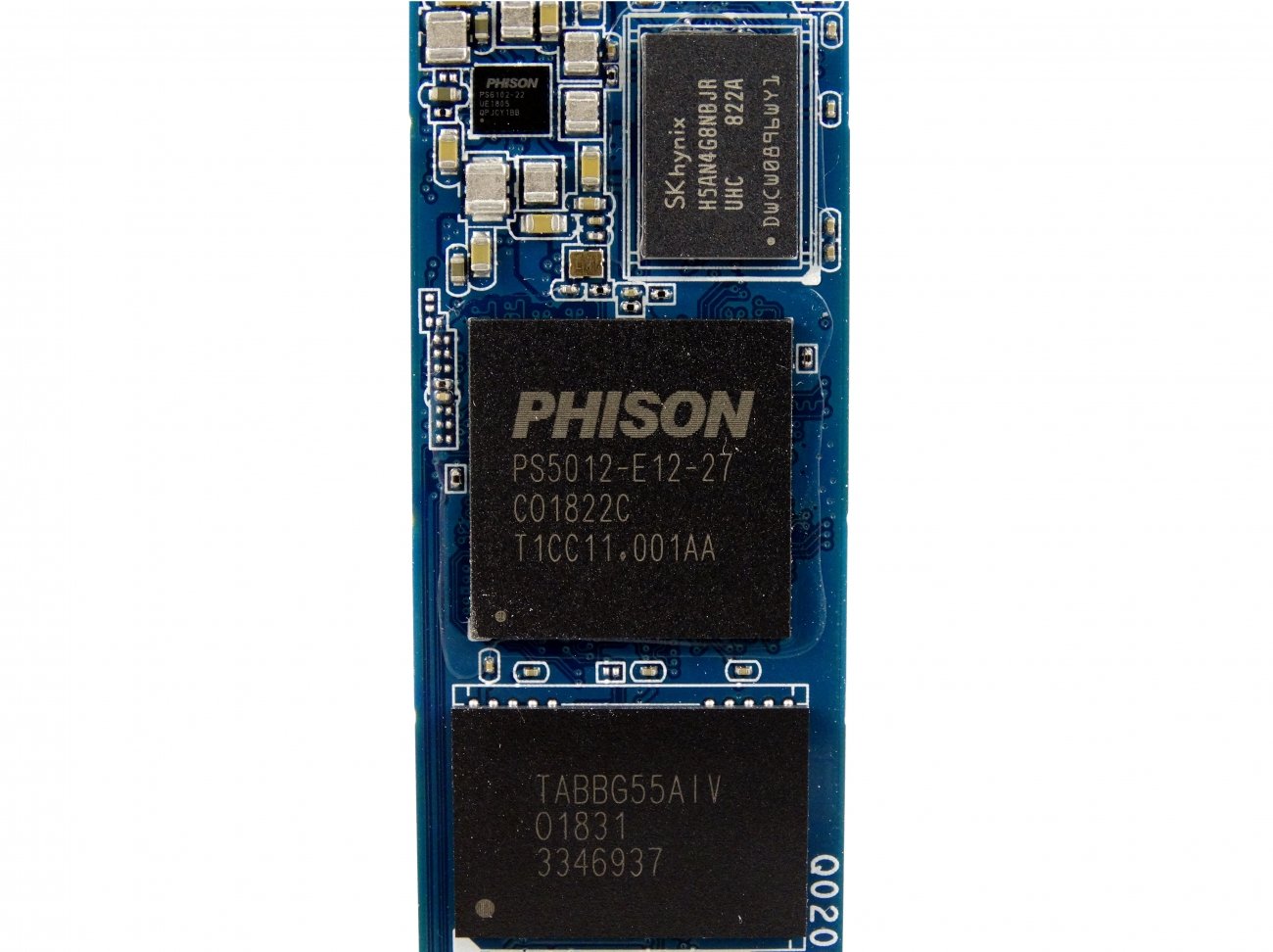 The 480GB we're looking at today and the 240GB models use a single-sided design while the two larger sizes place surface mount components on both sides. 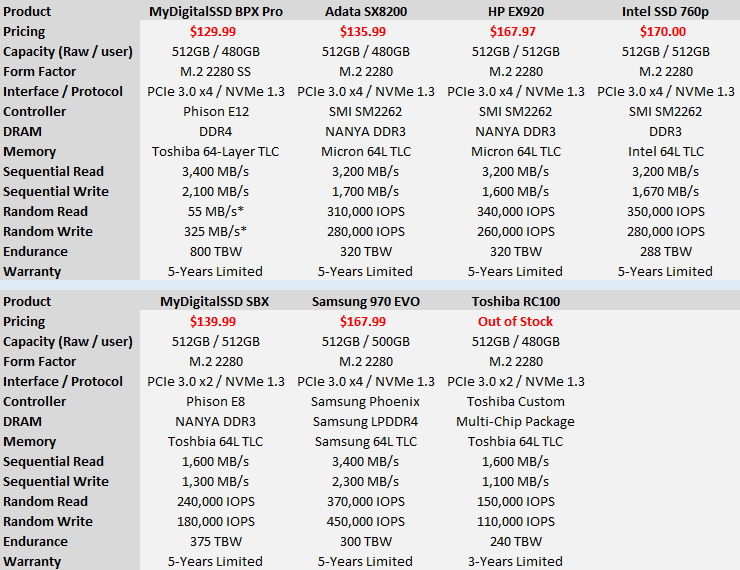 A few of the same names carry over to the 512GB class testing. We've included the original BPX and the entry-level SBX to get a strong comparison between the three. The Intel 760p joins the party but is another drive with the SMI SM2262 controller. 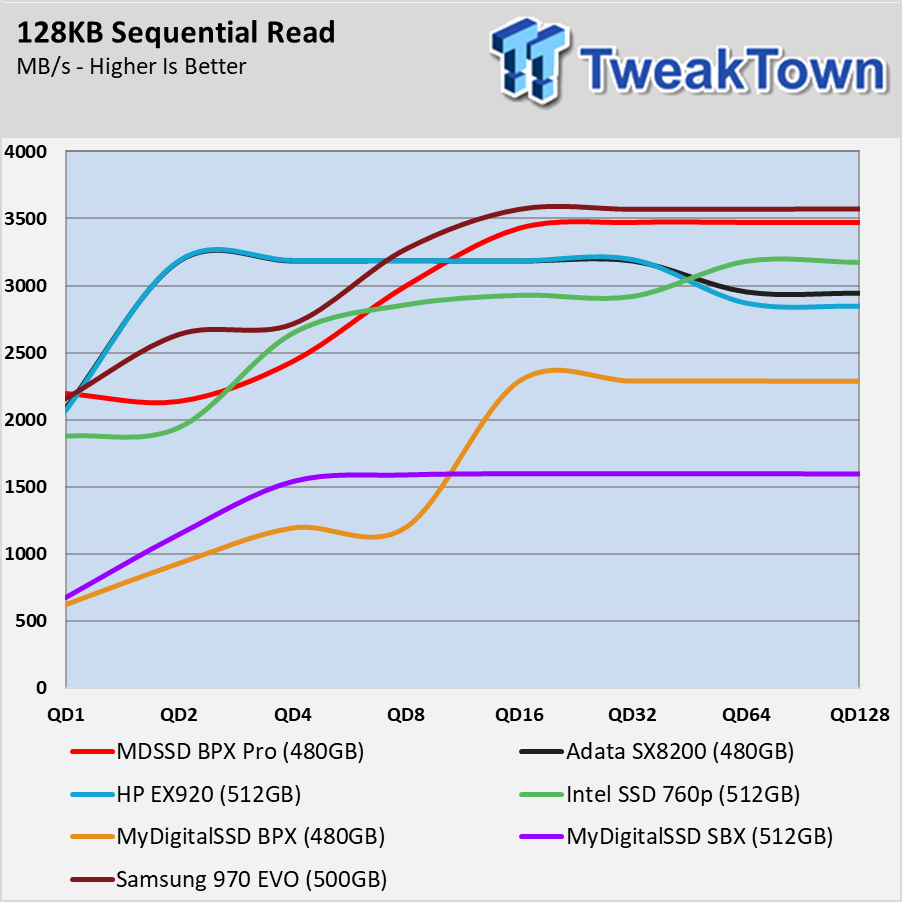 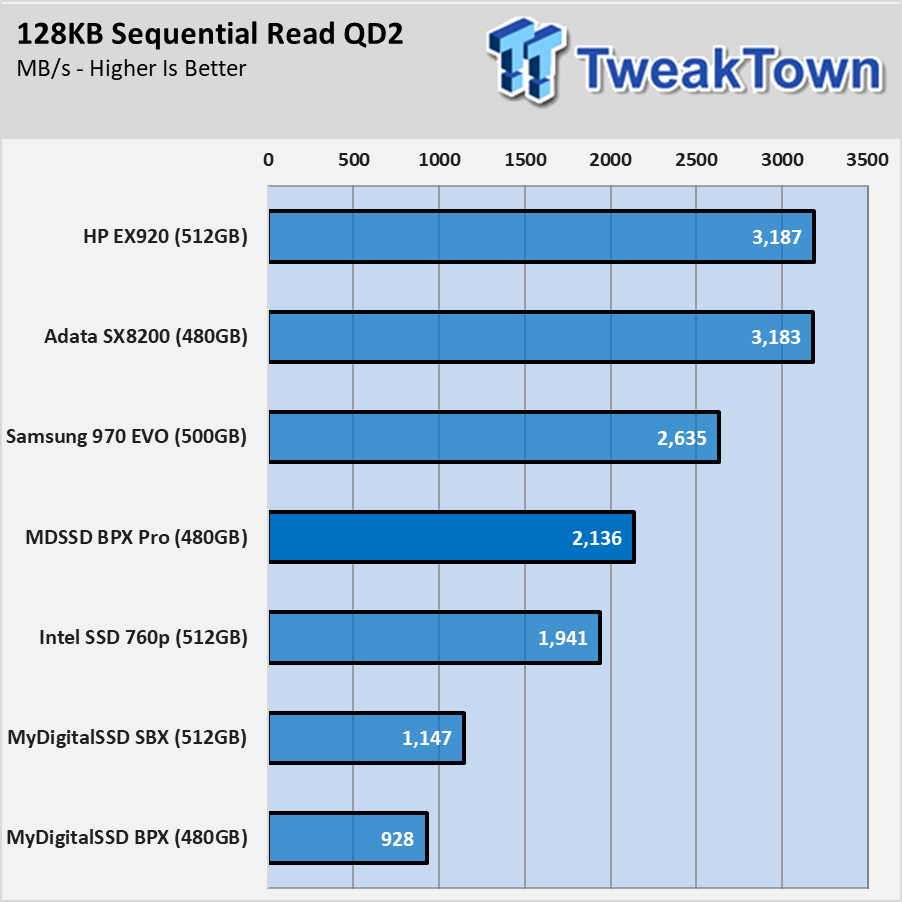 The QD 2 and 4 sequential dip carries over to the 512GB class. This is more of an issue with our test script and not a problem with the drive. On the high-end, the BPX Pro achieves just under 3,500 MB/s, and the QD1 performance is actually higher than every other drive in the charts today. 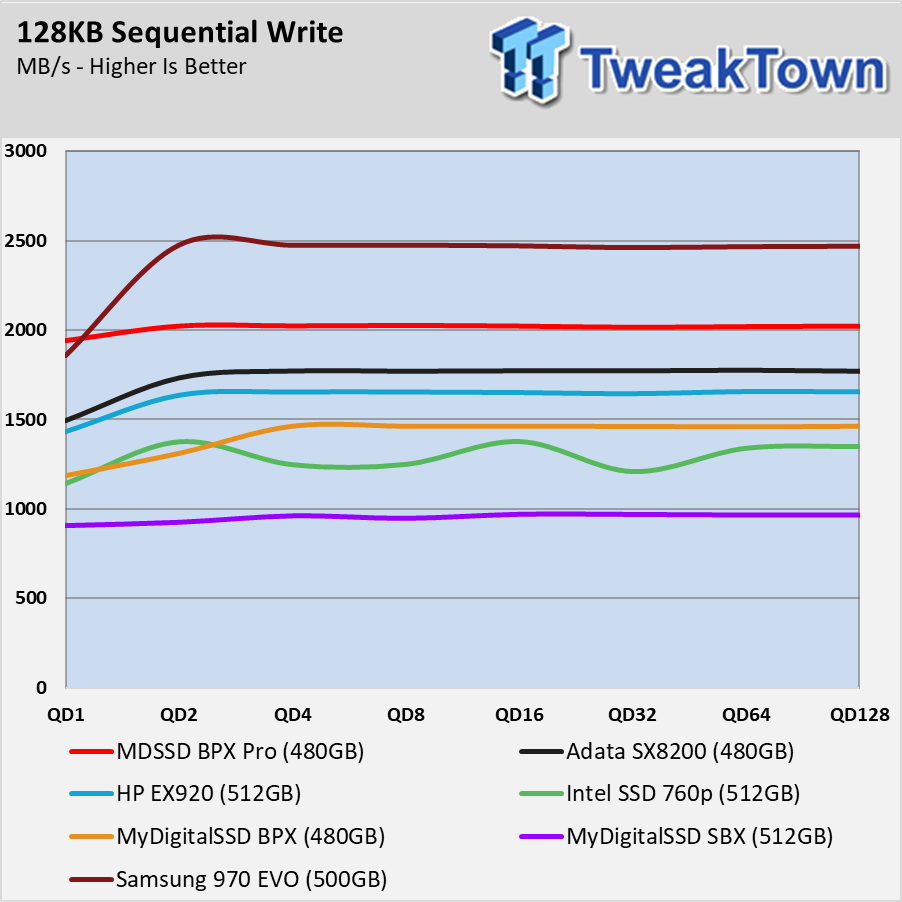 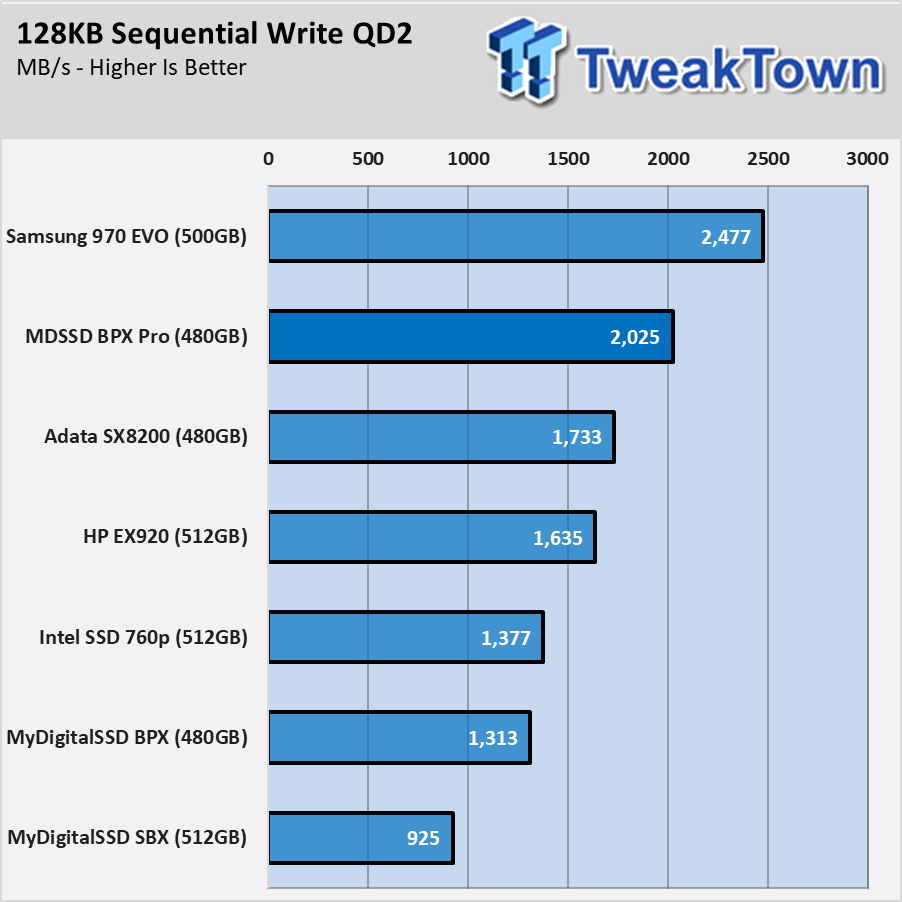 We nearly hit MyDigitalSSD's claimed 2,100 MB/s sequential write speed with the 480GB BPX Pro without using more than one CPU manager. The drive trails the Samsung 970 EVO in this burst test by close to 500 MB/s. 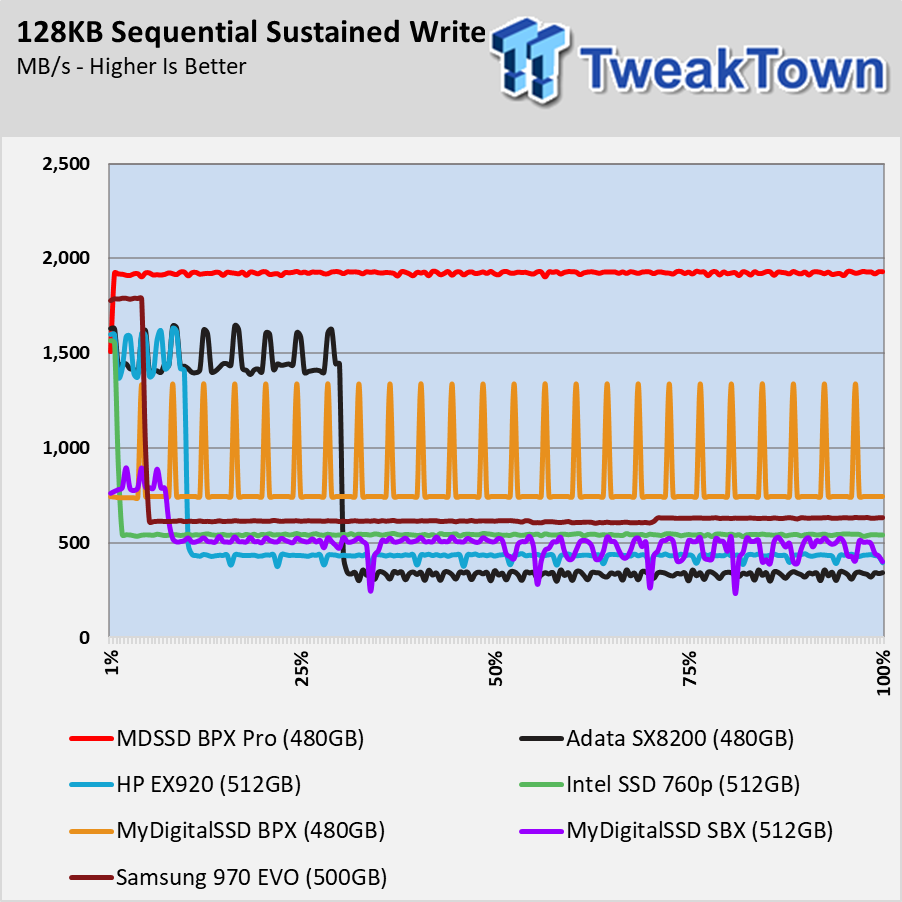 The sustained sequential write performance is very strong. We measured right around 1,900 MB/s with a single thread transfer. 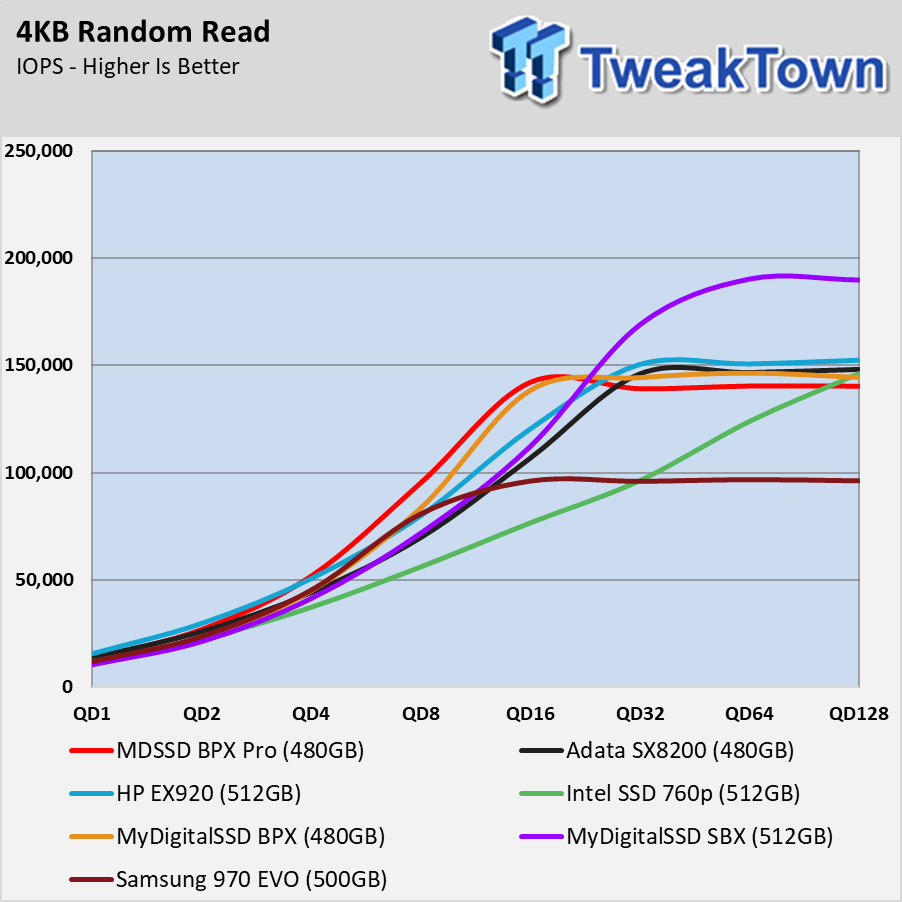 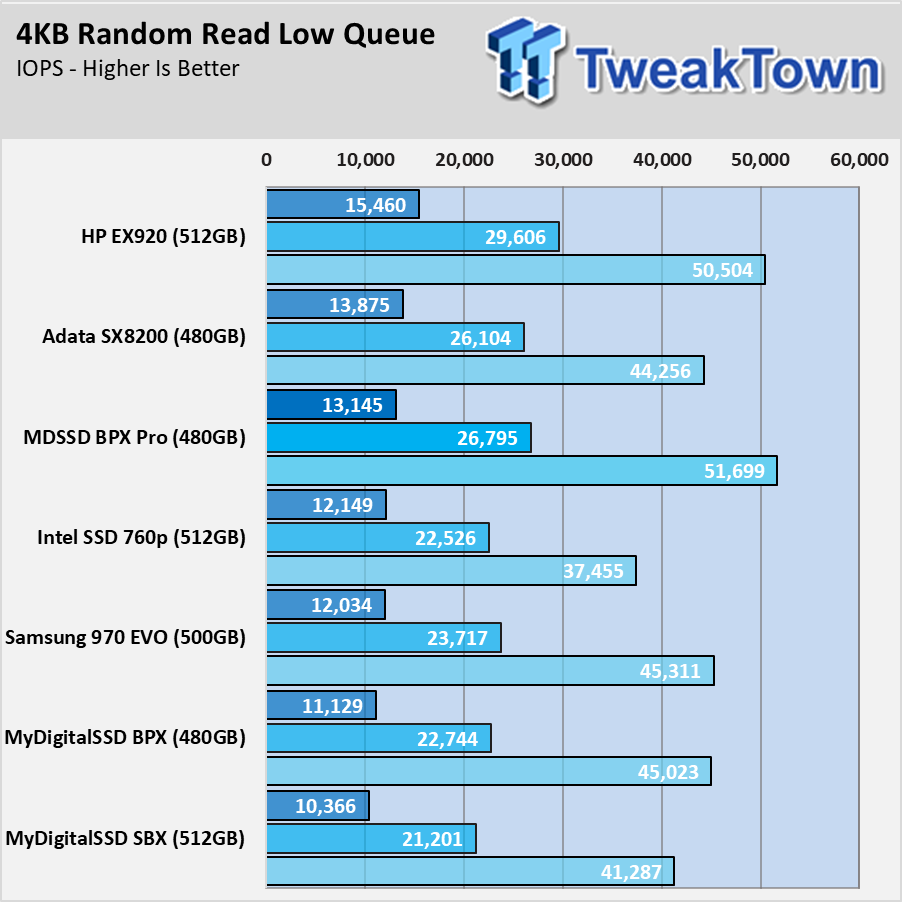 The 480GB drive also delivers just over 13,000 random read IOPS at QD1 like the larger 960GB. The HP EX920 and Adata SX8200 both lose some performance in this test compared to the larger capacity versions. The 480GB BPX Pro is very close to the SX8200 with less than 900 IOPS difference. 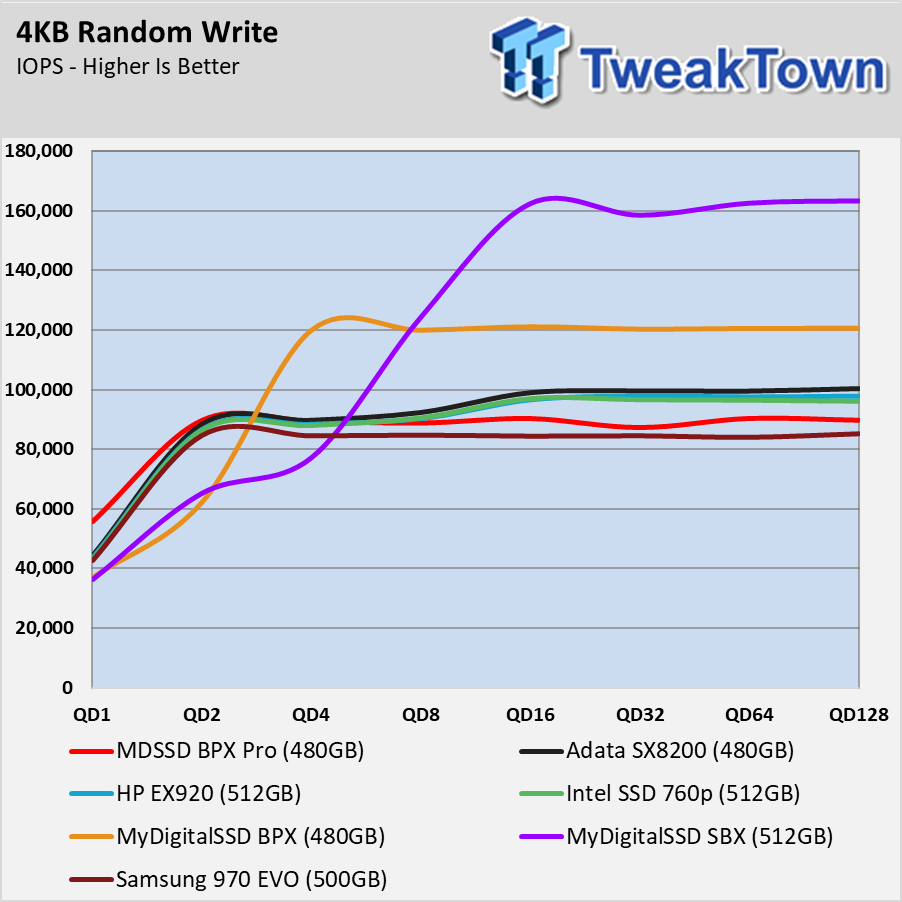 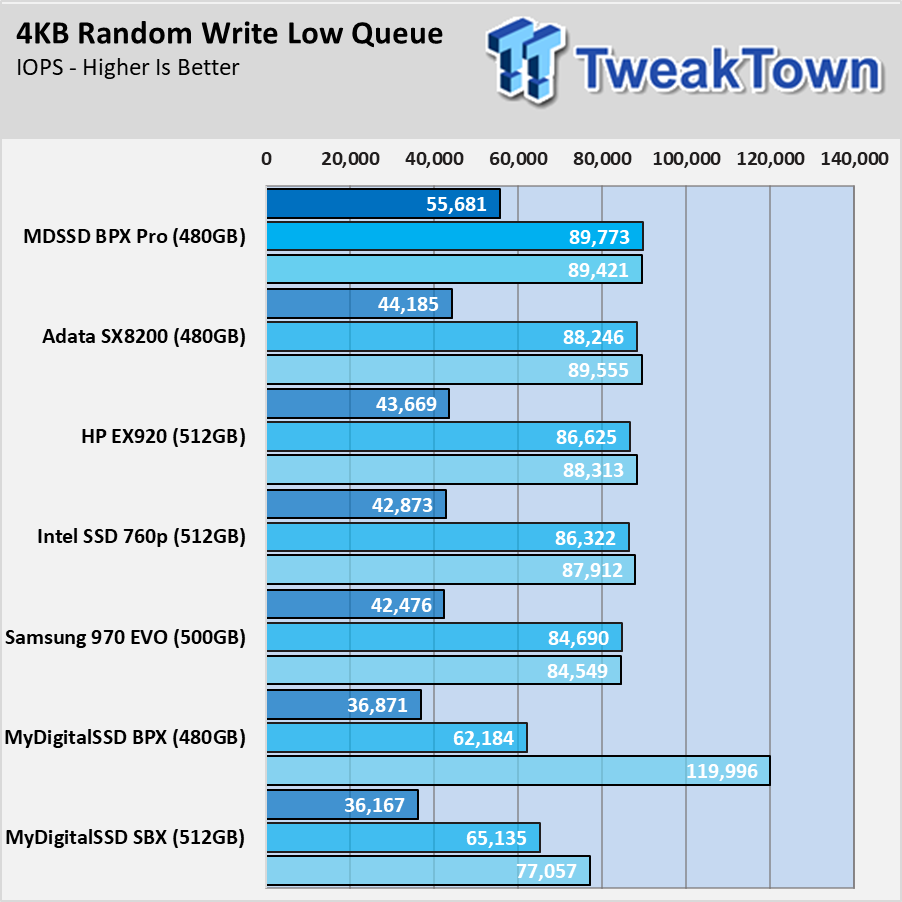 You will notice the MyDigtalSSD SBX shows superior random write performance compared to all of the other drives. We thought we updated all of the drives with new tests running the Spectre and Meltdown patches but missed the SBX. The test shows how the patches hurt write performance at high queue depths. We decided to leave the SBX numbers as is for this review since it's not a serious contender to the new BPX Pro premium SSD. 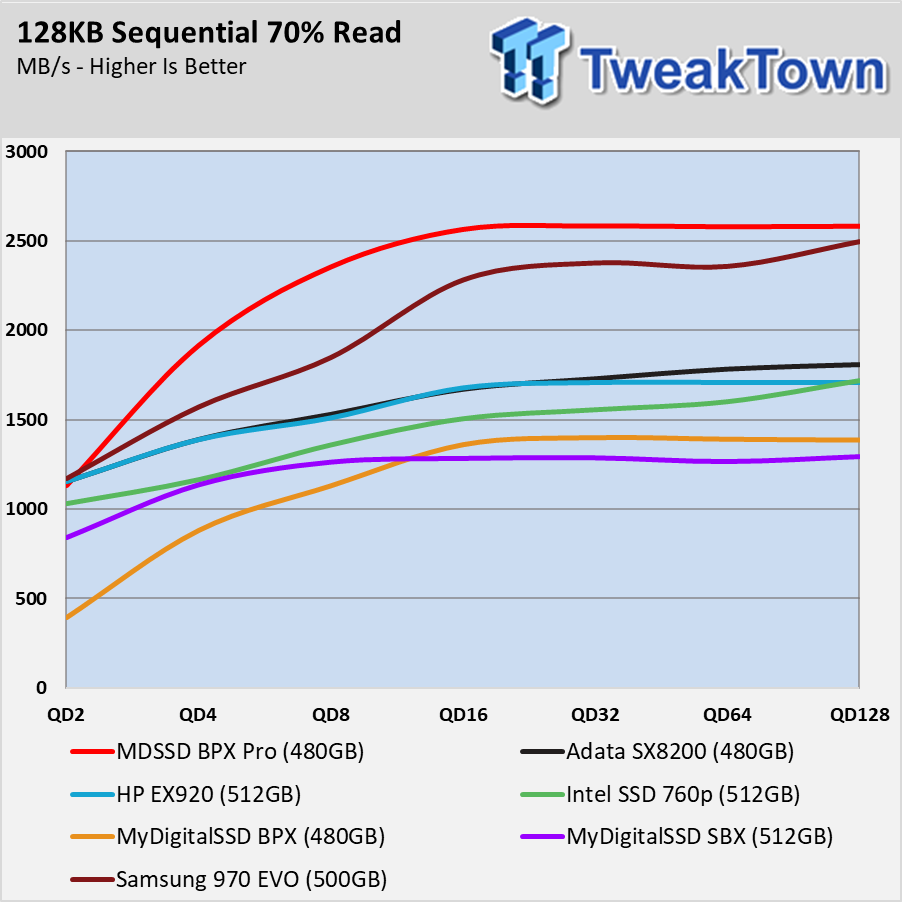 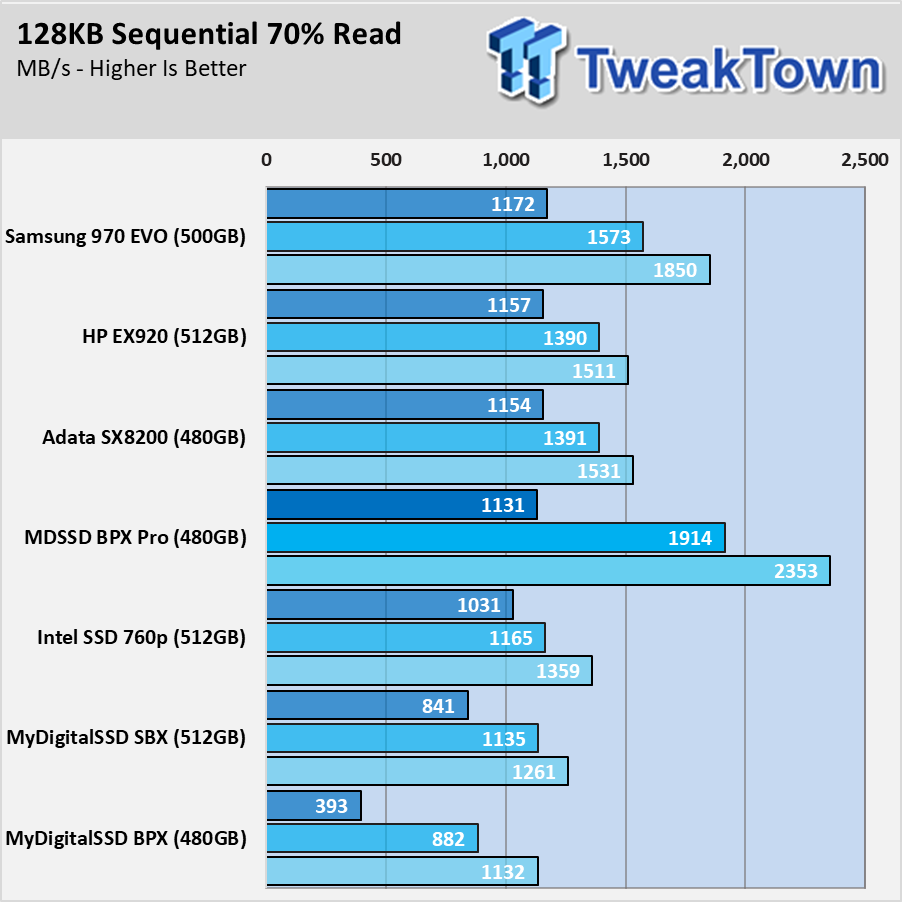 We said in the sequential read test that we are not too concerned with the dip at QD2 and 4 because it doesn't show up in any other test. That also includes the same test perimeters in other software.

It also doesn't show up in the mixed workload tests with 70% read sequential data. The 480GB BPX Pro walks away from the other drives in this test, and there is significant distance in the important QD 4 to 8 range. 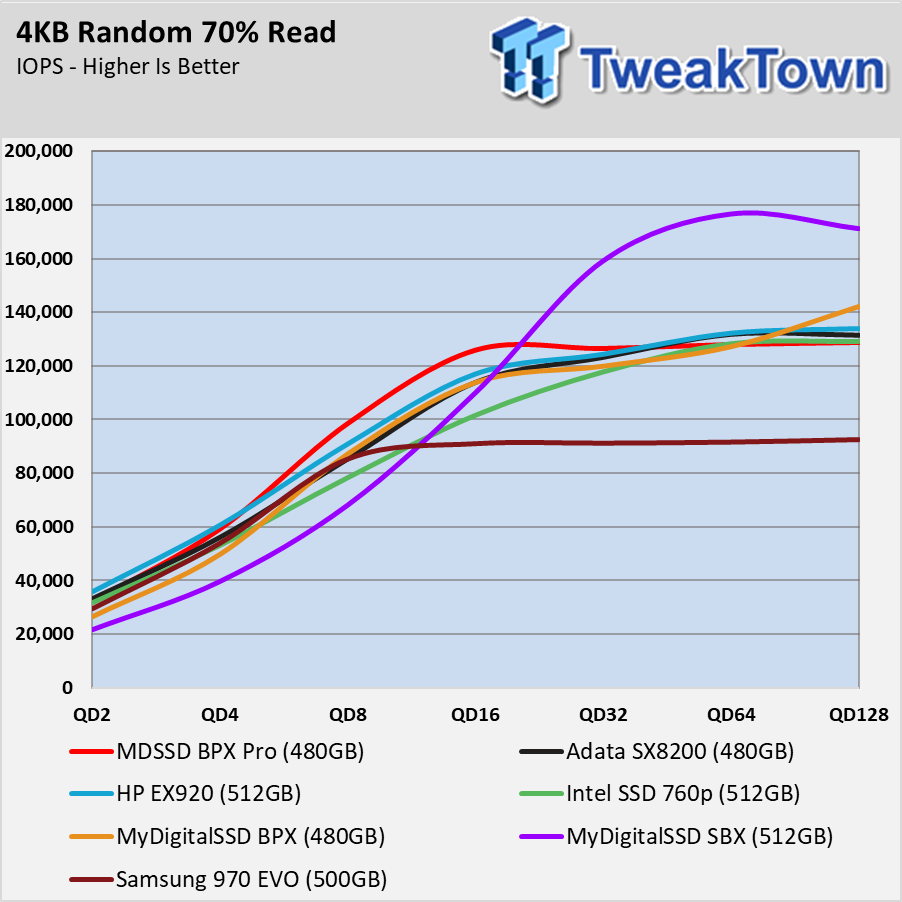 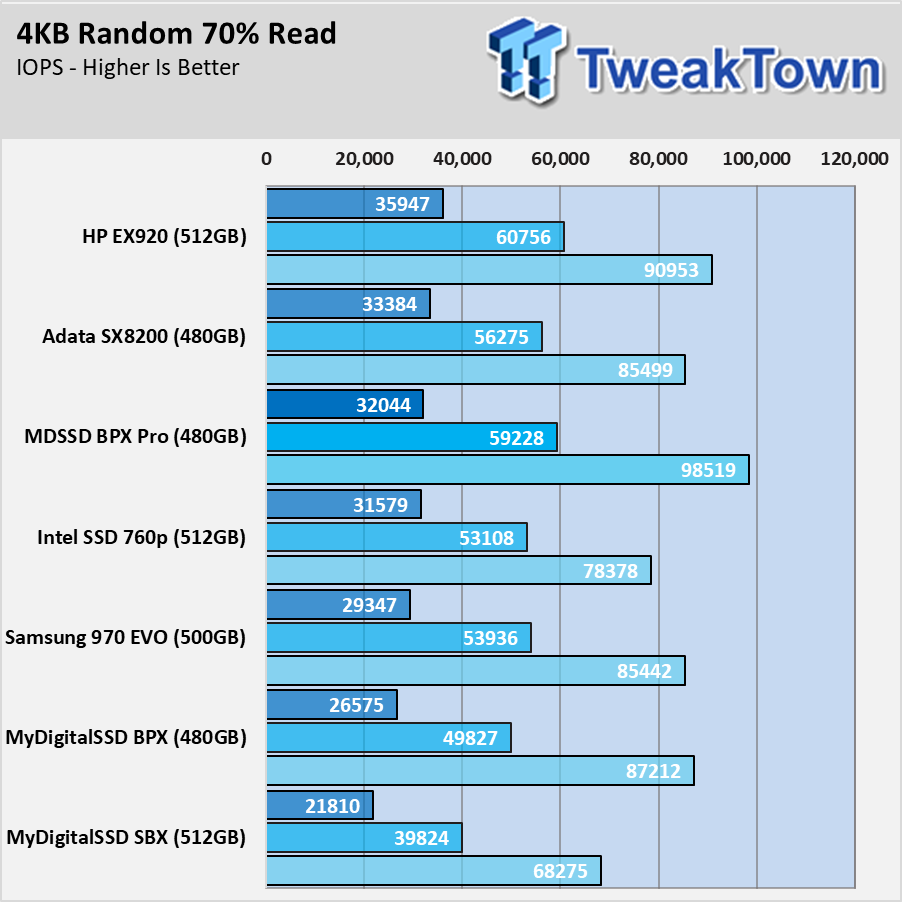 The random mixed performance test shows performance that is more subdued but it sits right in the middle of the three SM2262 controller drives. 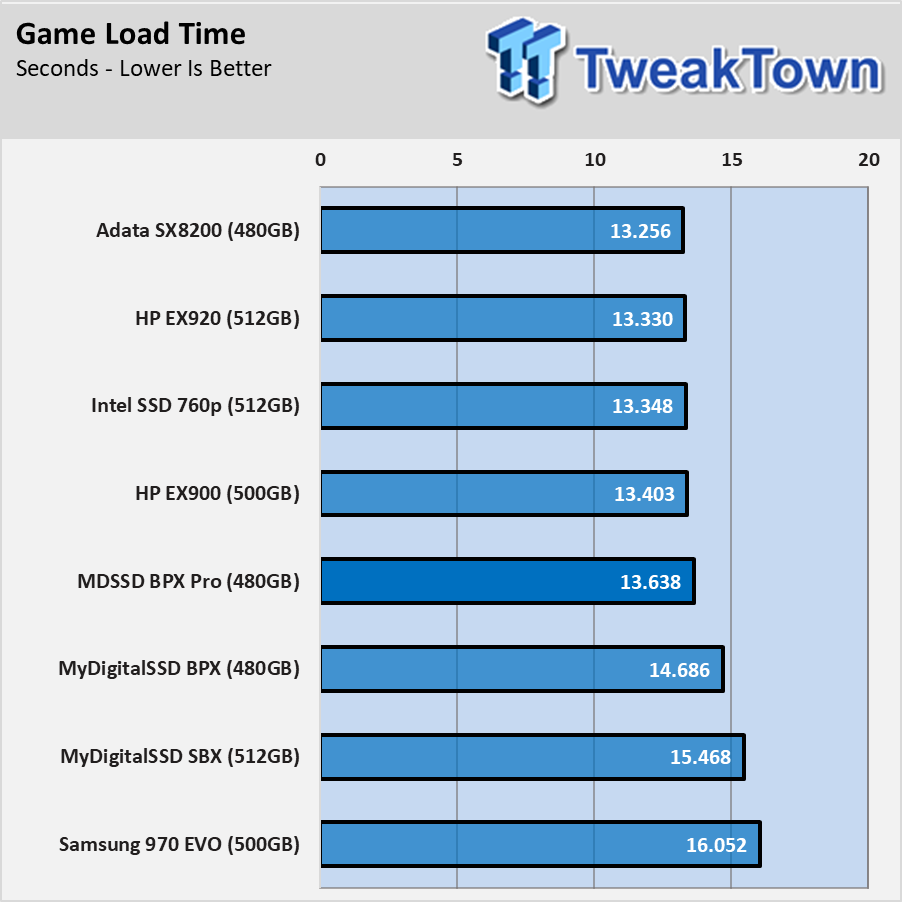 Gaming performance isn't groundbreaking with the 480GB BPX Pro. The drive does stay within a half second of the Adata SX8200, the chart-topper. The new Pro does perform better than the previous generation BPX by nearly a full second. 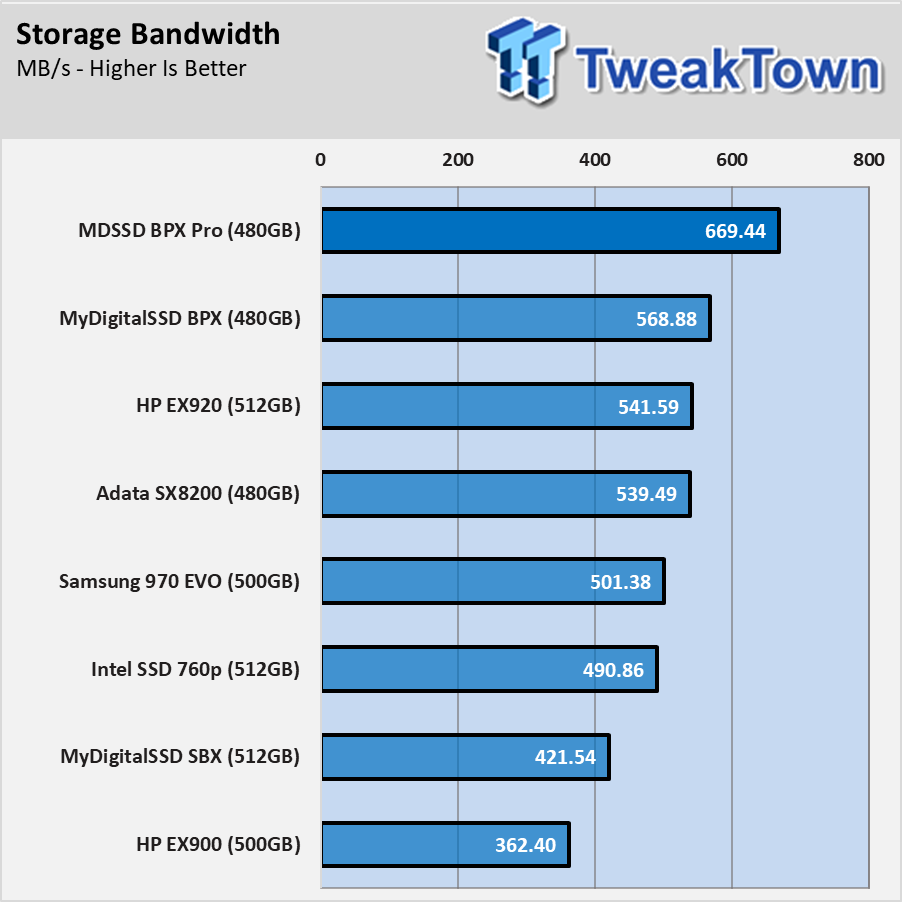 The original BPX delivered very strong application performance with its MLC flash. TLC flash has come a long way since the BPX came to market. The new 480GB BPX Pro is the rightful successor and takes its place at the top of the general application chart. This is a different outcome from the 1TB class products where the BPX Pro was closer to the middle of the group ranked by performance. 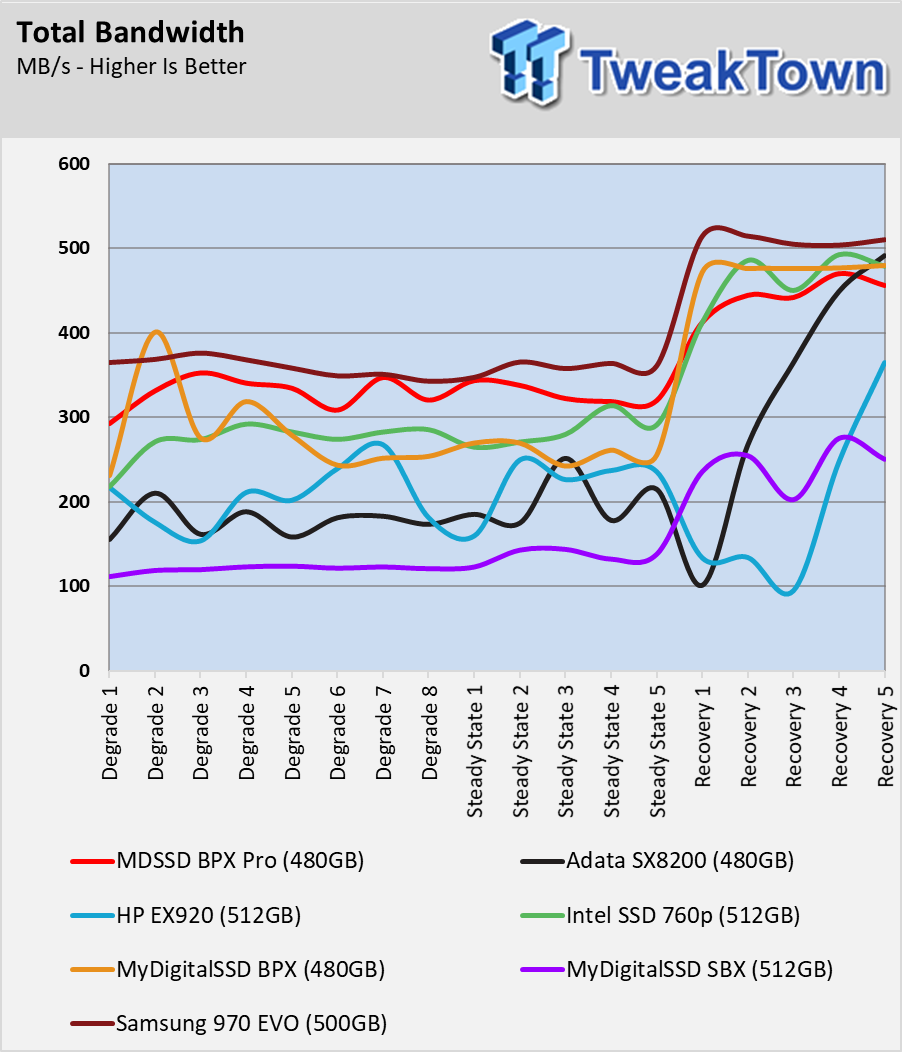 The 480GB BPX Pro performs very well under heavy workloads. This is typical for Phison controllers. The 480GB BPX Pro takes longer to recover when we add idle time. This is also typical but for newer SSDs that rely heavily on SLC cache and with less processor cores. 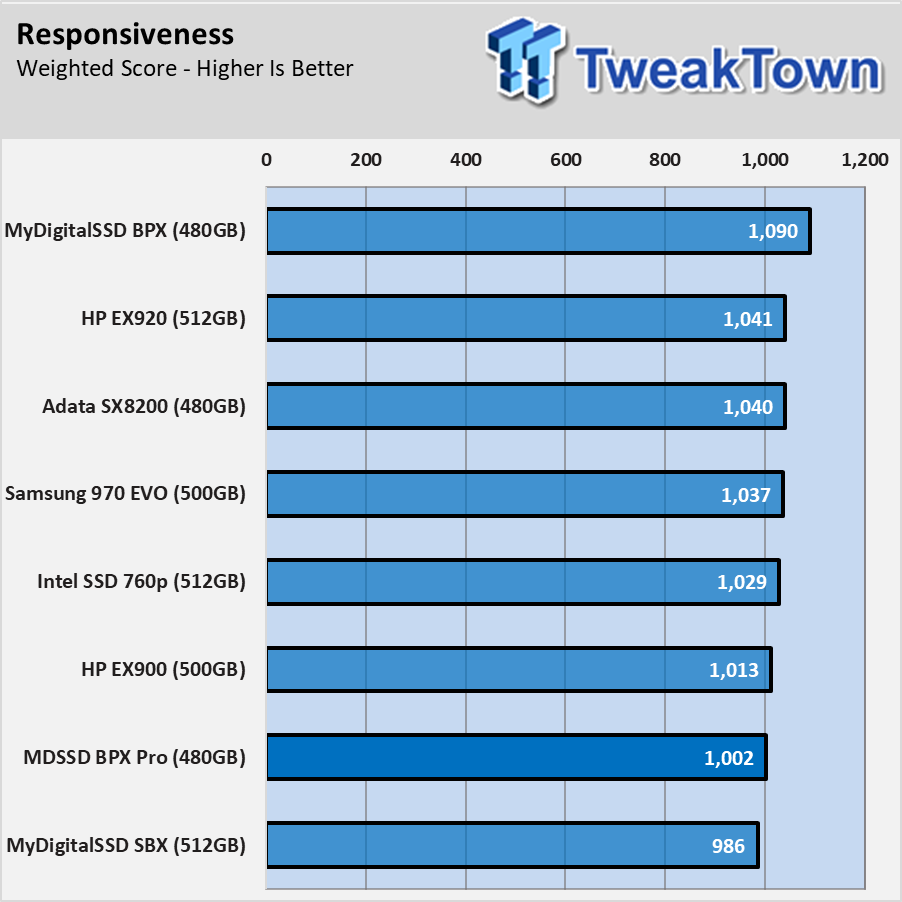 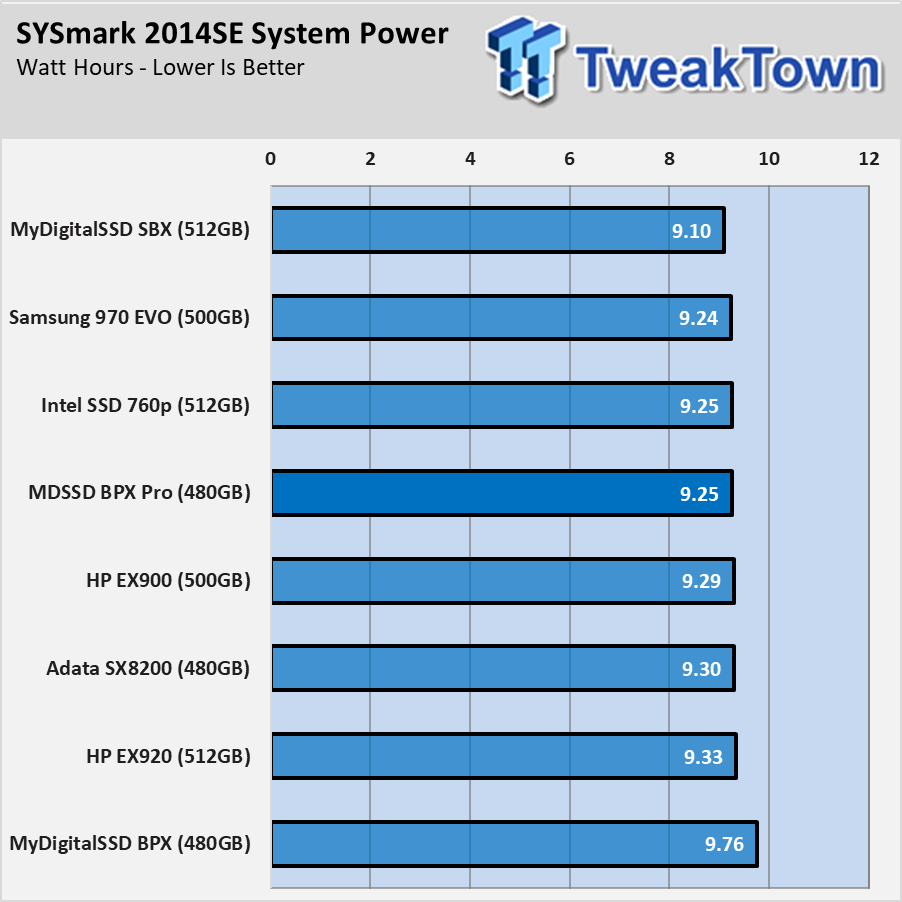 We were again surprised to see the BPX Pro near the bottom of our Responsiveness Test. We will need to investigate this issue further over the coming weeks. We plan to install a BPX Pro in a system we use every day to see how it "feels" under a consumer workload. 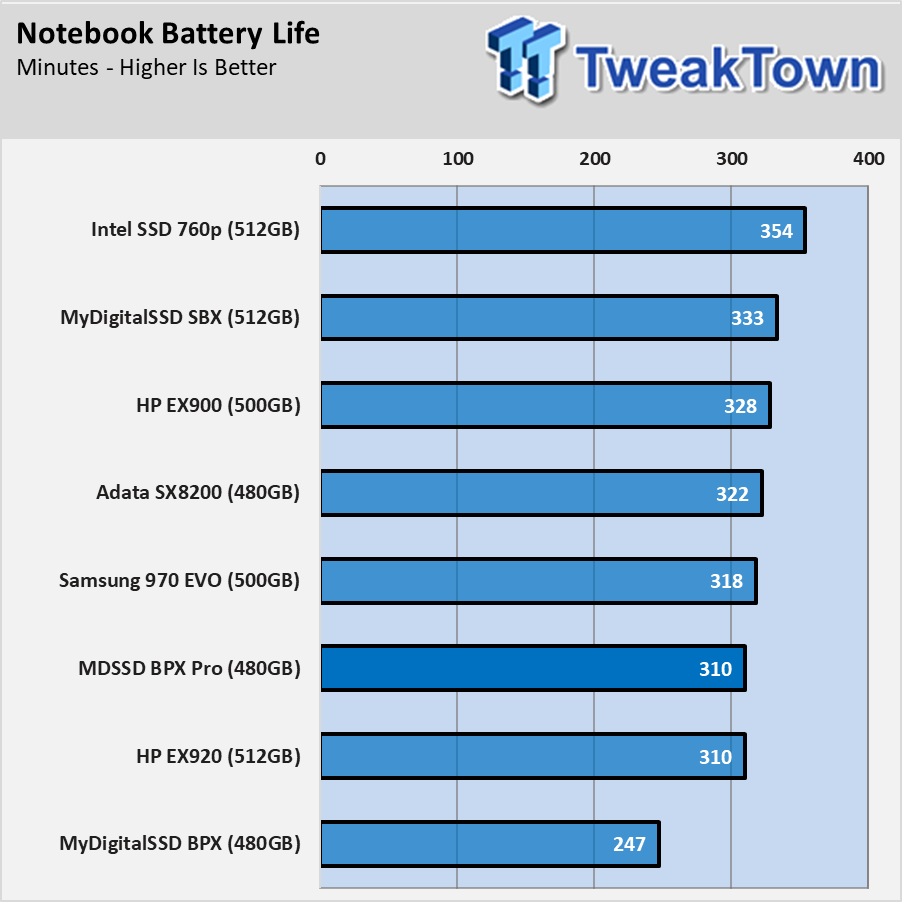 The 480GB BPX Pro performs a bit better in our notebook battery life test than the later 960GB model. We measured five hours and ten minutes in our Lenovo Y700-17 gaming system.

The 480GB BPX Pro is one of the best NVMe drives in this size class. It costs less than it's closest competitors, SX8200 and EX920. Both of those drives lose more performance than the BPX Pro compared to the 1TB class versions. We could easily argue that the EX920 1TB is still the best 1TB SSD outside of the Optane SSD and 970 Pro, but we can't say the same about the 500GB model now that the BPX Pro is here.

Priced at roughly $130 on Amazon, the MyDigitalSSD BPX Pro is a great value. At the time of writing, it costs less than the slower SBX using a 4-channel controller. This has been in the MyDigitalSSD playbook for some time now. Release a superior product and then price it at or near entry-level products to increase market share.

MyDigitalSSD doesn't have Silicon Valley-size overhead or shareholders to report to and that allows the company to remain lean. The company's savings pass to the consumer. That's what makes this company's SSDs such a great value.

MyDigitalSSD could have easily priced the 480GB BPX Pro at $167.99 with the EX920, and that wouldn't have changed to performance, warranty or endurance. We would say the same thing about this drive today. A strong NVMe SSD that leads other TLC-based drives in application performance. Priced at just $130, we have something special on our hands.