What exactly is FPV flying?

Almost everyone has laid awake at night and dreamed about being able to soar through the sky like an eagle, seeing new sights, doing tricks and speeding off to see friends without a single worry of traffic. Unless you spend quite a lot of money to get a pilot's license and your own aircraft, this isn't exactly a realistic possibility. 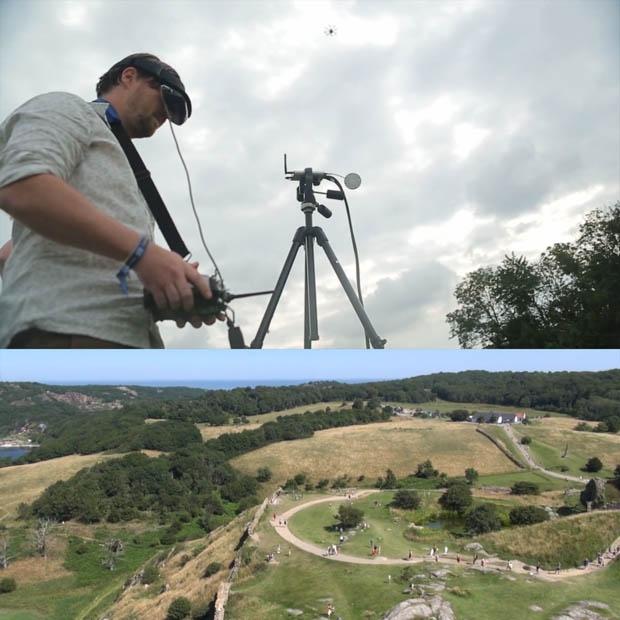 However, there has been technology invented which allows you to do pretty much the next best thing. No, this isn't a simulation, this is real life - you can strap a camera to your radio controlled plane, put on some goggles, and get a live-feed including a heads-up display, just like a real fighter jet (well, almost).

This will enable you to get a real-time feed of what your plane sees - flying through scenic views and soaring around the clouds with ease. It also gets rid of a common problem with model plane flight, which is losing your aircraft. The HUD will display your distance from home and in which direction it is, allowing you to safely come back each and every time.

As with almost-anything that is fun, there are a few limitations and also realistic and practical implementations for the technology. In recent years, there were some massive earthquakes located within the New Zealand's city of Christchurch, rocking their CBD and rending many buildings, infrastructure and businesses completely useless.

In order for engineers to inspect some buildings for structural integrity from the safety of outside, they utilized drones controlled by iPads to fly into large-scale areas like churches and shopping centers. This enabled preliminary visual checks to be made and consequently saving many lives. Exactly the same can be seen on quadcopters of today, with people actually racing against one another through tree-cluttered woods and park areas, able to dodge all obstacles due to their front-seat view of the situation at hand.

As far as limitations go, because this is an airborne project, you have to adhere to rulings such as height restrictions. Pilots must keep their model at least 30m away from any people, objects or animals, and your radio is only allowed to broadcast at a certain signal strength, as to not interfere with anything around you. This means there is a limit as to how high, far and wide you can travel - but it's still very awesome.

The video you watched above is a mix between FPV-capable aircraft and others that are fitted with various different GoPro (and similar) models. This scenic beauty of a place is Don heads, located within the North-West of the little island state of Tasmania, nestled at the bottom of Australia. This fan-made video covers many different plane models functioning with this technology and gives you an insight into what to expect when exploring the wide world of FPV flight.

Whether you want to use a quad-copter, helicopter, or plane for this project, you're going to need some FPV gear. There are plenty of different videos out on the web describing how to add custom FPV technology to your existing aircraft, or plenty of kits that are solely designed for particular models - of course, these are alongside official aircraft that come already built with the capabilities. However, you'll find that many radio control model fanatics are very 'DIY' when it comes to their projects, so many prefer to purchase kits and do it themselves, meaning they can add this technology to their preexisting favorite aircraft.

Besides offering you a completely awesome HUD just like is seen on a fighter jet or an attack helicopter, this display panel actually tells you some useful information. As there is a distinct lack of gauges to be used or seen, everything must show up completely in front of your face.

Most models will include features such as flight time counters, battery capacity monitors, height indicators, pitch and yaw indicators, a compass heading, a 'direction to home' display and an airspeed speed indicator among others. Each of these components are valuable for various reasons - one of the main overlooked ones is that of the battery capacity monitor. Without you being able to tell 'how much is left in the tank', the last thing you want to do is have to go searching through miles of wilderness to try and discover your plane wreckage.

Given the video above and its quality, it becomes obvious that this is no HD cinema experience, which is why most prefer to also attach camera alternatives such as GoPro's to their aircraft, recording a second stream of HD video for later viewing. However, it's still an amazing advancement in technology and something worth considering for any enthusiast looking for a little more out of their product.

Where to from here?

HobbyKing is one of the main radio control enthusiast websites across the globe, stocking products ranging from radio controlled motorbikes, to boats and FPV components. After a quick search on their website, there is a myriad of different FPV options to chose from including FPV-promoted planes and starter kits.

If this is a little too overwhelming and you're not interested in talking to their staff about your options, you can take a look at something like Mongrel Gear and their FPV kit offerings. In here, you can see fully-stocked starter kits, ground station packages, which will see the picture beamed to a small TV and various mounting kits and accessories on offer. My father is an avid FPV user (he's actually in the first video), and recommended that I look into Mongrel Gear if I am wanting to partake in this myself.

Is FPV really for me?

What kind of experience does it require?

We suggest that if you're completely new to model planes, not only should you search YouTube for the hundreds of various beginner flight guides, but you should also look into planes that are very slow flying. They might seem boring at first, but your wallet will thank you dearly when a 2mph crash only bends a propeller, compared to this family friend of mine wiping out his whole project in spectacular fashion, pounding the ground at over 30mph.

If an investment in the hundreds isn't on the cards just yet, you can get your hands-on plenty of model flight simulators that actually utilize your real life model aircraft controllers plugged into a computer via adapters to simulate real flight circumstances. There is a myriad of different plane and helicopter options on offer, seeing you be able to pick different weather conditions and locations to further train and test your mettle before taking to the real-life skies.

One of the main programs available is Real Flight, which gives users different challenges to complete in order to gain more skills 'behind the sticks' of your aircraft. If you're worried about legitimacy, my father actually used Real Flight 4 to train himself in the art of flying radio controlled helicopters, and now he's just as good as anyone else out 'in the wild'.

Once you've gotten some experience and are interested in conducting your own FPV flight, we suggest that you have a few friends around to keep a look-out and head to a nice open area to begin flight. As you can see through most of the videos I have linked above, they're conducted at the top of a cliff overlooking the ocean as power-lines are not your friend!

Good luck and enjoy your FPV flight. We'd love to see some fan-made pictures and videos from your journey, and I hope that this article has helped convince you to take the plunge into the expansive world of model flight. Please be aware that it is not for the feint of heart, as many hours of design, production and building goes into making a perfect flying vessel - this is coupled with the fact that FPV technology is new and not very cheap at its current standing.

What we're saying here is, if you're interested - don't apply the brakes, just go full steam ahead!

On a last note, please ensure you read up on your local aviation rules regarding model or drone flight. We've reported recently on a man who almost ran into a police officer and interrupted a whole operation thanks to his drone piloting experience going pear-shaped.