Over the past few months, we have been able to get our hands-on many of Seagate's latest offerings including 5TB and 6TB solutions. Adding these new solutions with our previously reviewed Desktop HDD 4TB, we now have a complete set of 4TB, 5TB and 6TB drives.

With each of these drives now in the lab in pairs, we could find no better time than now to set up a few RAID arrays using the integrated solution on our test platform.

Today, we will explore the performance in RAID 0 for each of these solutions for those of you building storage servers or gaming rigs with intense capacity.

Our consumer storage-testing platform consists of a GIGABYTE Z97X UD7 TH Pro with an Intel Core i7-4770 at the heart. Memory consists of a 4 x 4GB configuration of Corsair Dominator Platinum rated at 2800MHz. Samsung 840 Pro SSDs provide storage of the test system.

PRICING: You can find the Seagate Desktop HDDs for sale below. The prices listed are valid at the time of writing but can change at any time. Click the link to see the very latest pricing for the best deal. 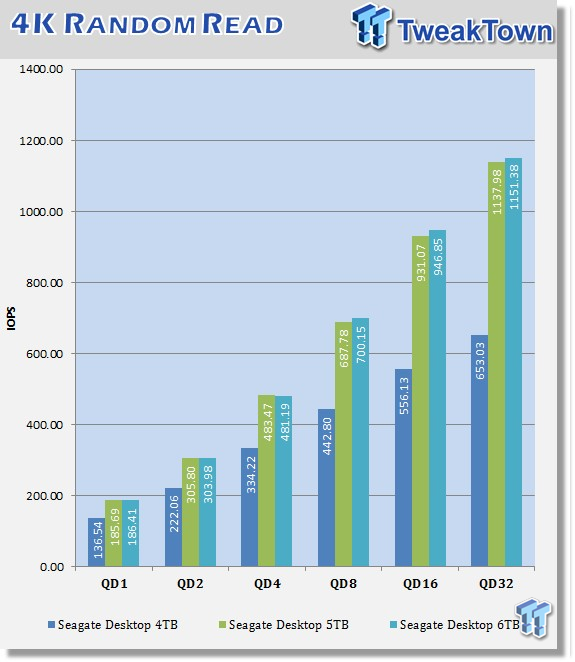 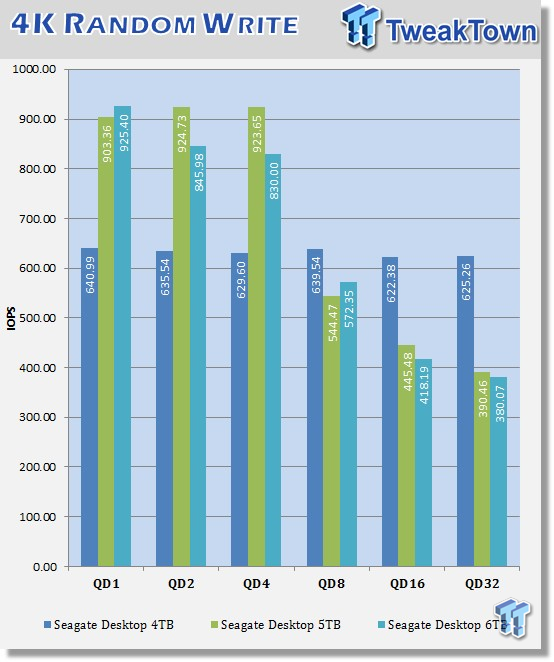 Random write had the 4TB model showing consistent performance throughout the QD scale, while the 5TB and 6TB fell off after QD4. 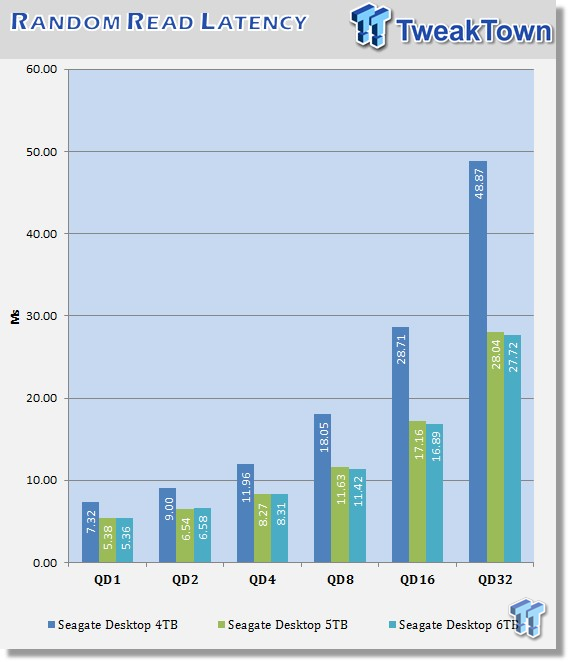 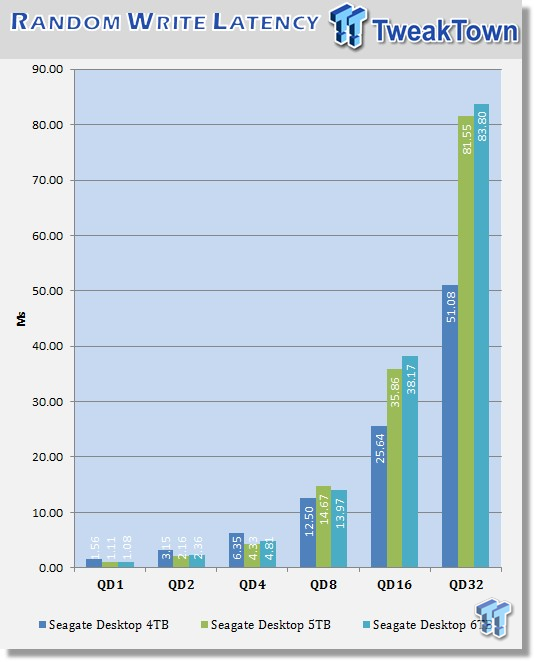 Write latency for the 5TB and 6TB arrays came in at 81ms and 83ms respectively at QD32, while the 4TB was much quicker at 51ms. 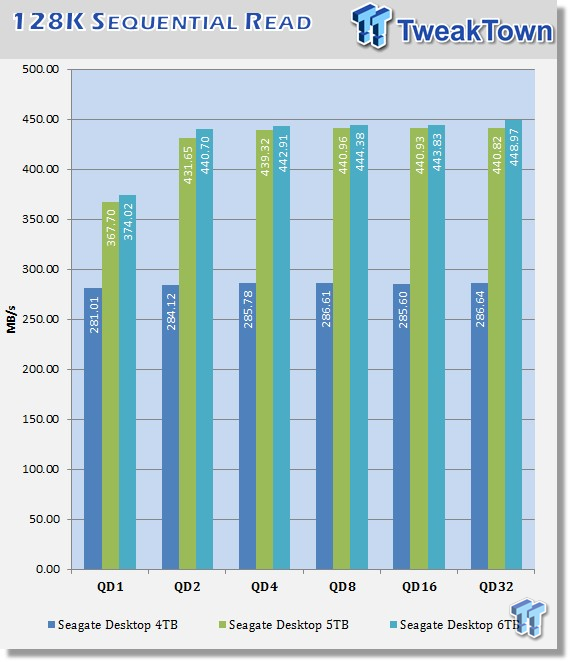 Sequential read for both the 6TB and 5TB arrays was rather impressive reaching 440 MB/s and 448 MB/s. 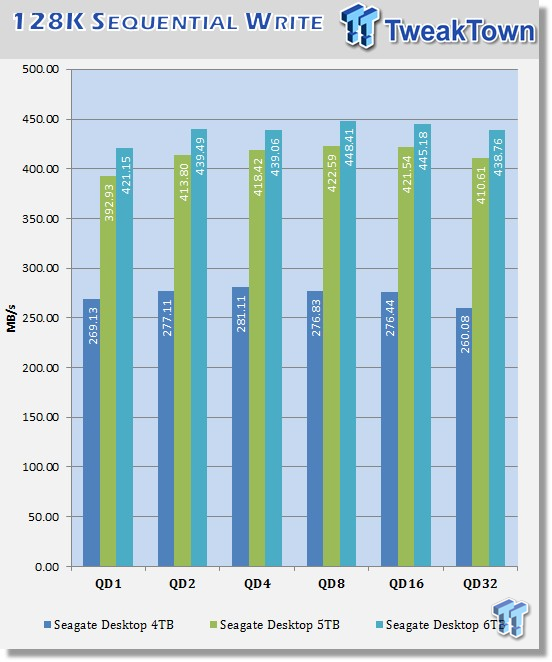 Moving over to sequential write, the 5TB and 6TB arrays again carried a large performance advantage over the 4TB array. Here we have 422 MB/s for the 5TB, and 448 MB/s for the 6TB array. 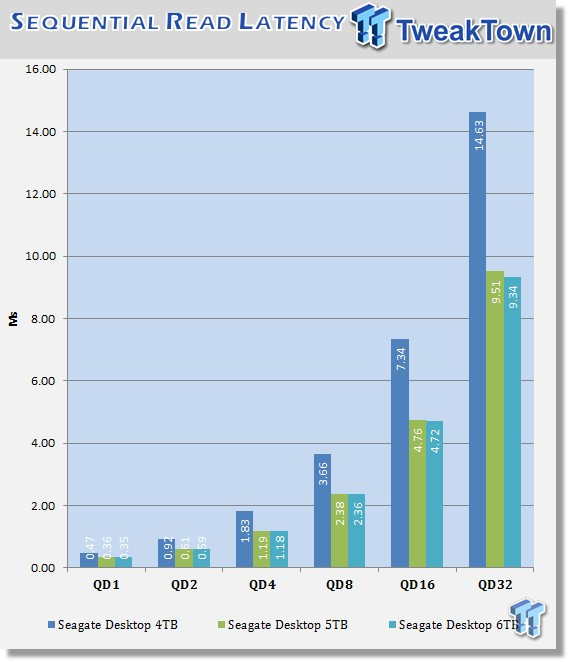 Read latency for both the 5TB and 6TB arrays was considerably better than expected. As you can see, they both managed near 9ms at QD32, while the 4TB array chugged along slower at 14ms at QD32. 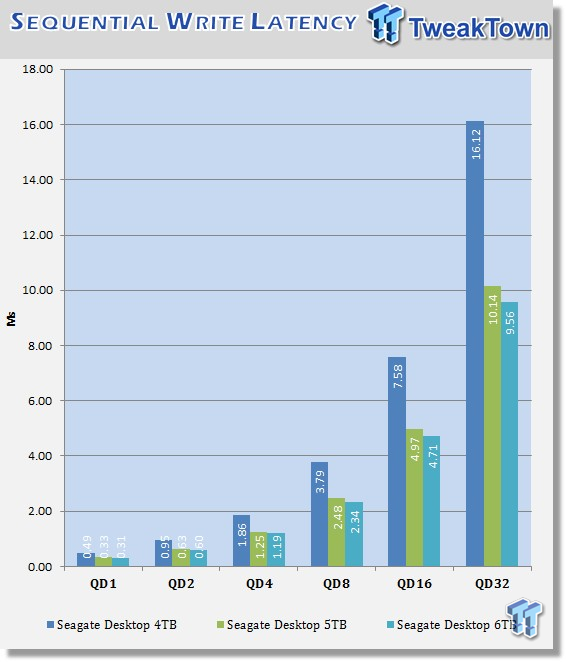 Write latency was quite similar to the read latency, where we found the 5TB and 6TB arrays being much quicker than the 4TB setup. 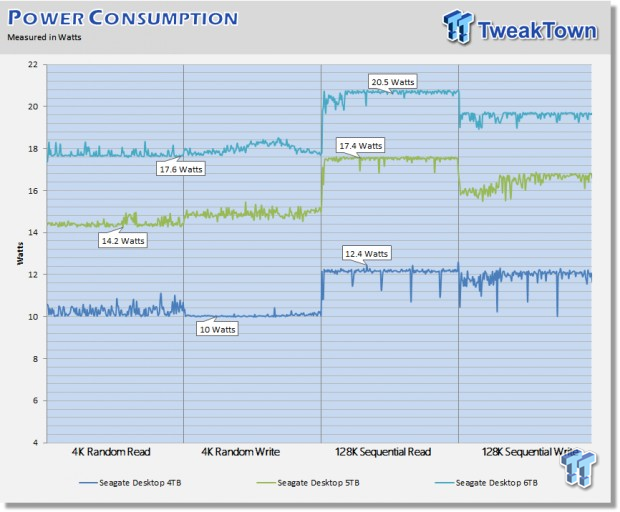 Looking over our power consumption results, we found the Desktop 6TB coming in at 20 Watts at its peak, while the 5TB and 4TB models came in at 17.4 watts and 12.4 watts, respectively.

Of course, this is due to the platter count in the 5TB and 6TB models, along with the very quick spindle speed of the new solutions.

If we compare the power stream from the 4TB model to the new 5TB and 6TB models, you can see there has been a change in the way these drives manage power transitioning between workloads. 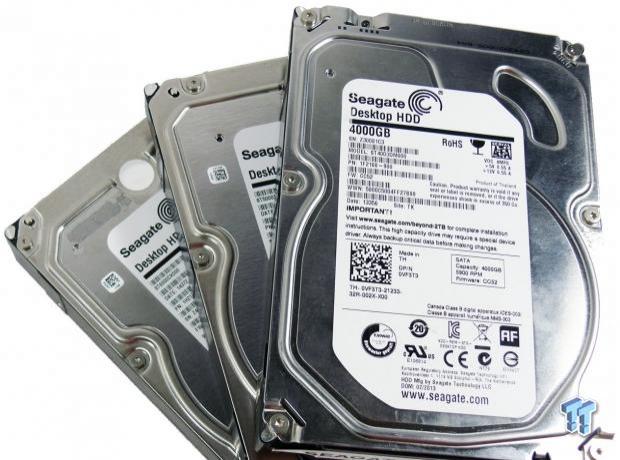 We knew going into this article that the Seagate Desktop 6TB would most likely take the performance crown for two drives in RAID, but as much as that is true, it is also good to see the 5TB was right there with it every step of the way.

In fact, there really is not much of a performance difference by adding another platter, and by that same token, there is no loss of performance either. What we do know is this latest generation of drives from Seagate holds a tremendous performance boost in single drive and RAID over the previous 4TB solution.

The performance jump is so big that when reviewing the 6TB model a month back, I recommended everyone dump their old drives and buy the 6TB, a statement I still stand by today. As easy as that sounds, I know many cannot simply run out and purchase another drive on a whim, but for those that can, this new generation of drives from Seagate packs a serious punch for your dollar.

All consumer hard drives from Seagate ship with a two-year warranty.

PRICING: You can find the Seagate Desktop HDDs for sale below. The prices listed are valid at the time of writing but can change at any time. Click the link to see the very latest pricing for the best deal.