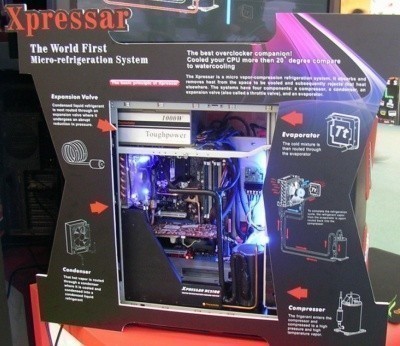 Thermaltake chose Computex as the venue to showcase their first entry into the phase change market. Media reaction was strong even though details were thin. Since Computex more details have emerged about the Thermaltake Xpressar, but few have been able to get their hands on a unit, until now.

Last month Thermaltake was able to ship TweakTown an early engineering sample Xpressar unit to get our thoughts on the cooling capacity and proposed retail trim. The cooling unit is still going through design changes but we are told the final production units are not too far away. Because of this ongoing development we will not be able to do a full review of the Xpressar today, but when the final retail product is available we will have a full feature length article. Until then, this is mainly a teaser, but we will be able to answer many of the questions that surround the Xpressar.

Thermaltake has built a website dedicated to the Xpressar, Xpressar.com. The company has been bombarded with emails from consumers and journalists asking for more information. Specifications, cooling capacity, images, and the requests have been nonstop since the launch of the site, so Thermaltake wanted to get a unit out to an independent media site to help answer these questions.

Phase Change Cooling for All? 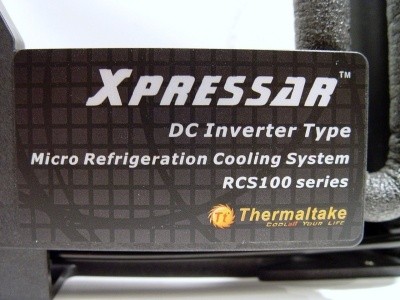 In my hands on first look of the OCZ Cryo-Z I stated that phase change cooling is not for daily use for most users. I caught a lot of flak from enthusiasts who stated that they wouldn't mind the added noise a compressor brings to the computer room. It is easy to claim if you have never personally owned a phase change cooled computer and many users haven't. I still feel that units like the Cryo-Z and Mach II GT are more for the overclocking elite and not typical enthusiasts or Joe Sixpack consumers.

Thermaltake recognized the shortcomings of existing phase change coolers on the market and has chosen to take a different approach with the Xpressar. The first hurdle to tackle was sub zero cooling and all of the problems associated with it. Condensation is the biggest concern and keeping moisture away from components is an expensive task. Since the Xpressar does not allow the processor to get to the point of freezing, expensive heating pads and closed cell foam is eliminated from the accessory expense.

Phase change cooling is able to break through the Ambient Temperature barrier by forcing a liquid through a thin copper tube and then expanding it in a chamber. When the liquid expands into a gas, effectively a phase change, it drops temperature. If you have ever used a can of compressed air to blow the dust out of your computer, the effect is the same; the can loses pressure and gets cold. 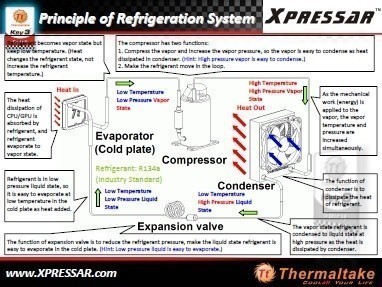 Unlike the compressed can of air example, a phase change cooler is able to recover the gas and compress it back into a liquid. The above image goes through the whole process and shows the liquid, to gas and back to liquid system. 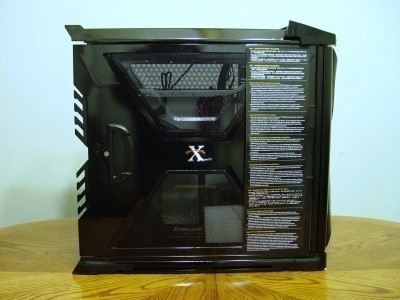 Thermaltake chose the Xaser IV to house the Xpressar system. The chassis has a lot of room and Thermaltake took advantage of the available space. 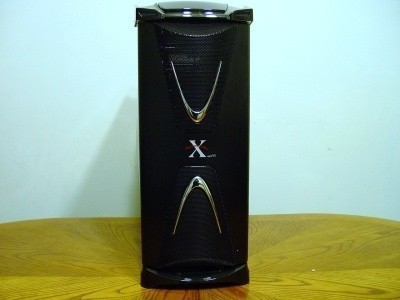 For the most part the Xaser IV was unchanged for the Xpressar project. 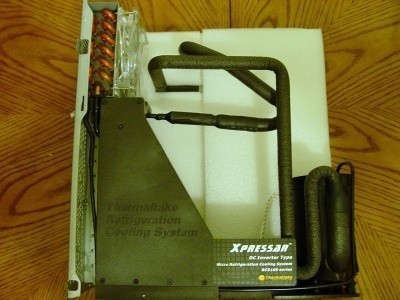 At the heart of the Xpressar is the cooling system. The phase change components are all mounted to the removable motherboard tray. Here we see the components packed in the protective foam that is used for shipping. 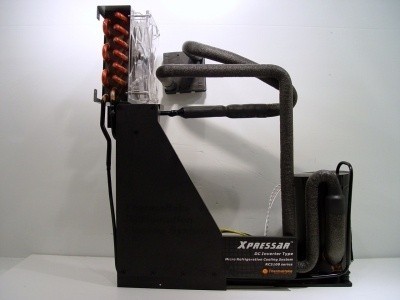 The Xpressar cooling components are only held to the motherboard tray with a few screws. Once they are removed you can easily separate the two. 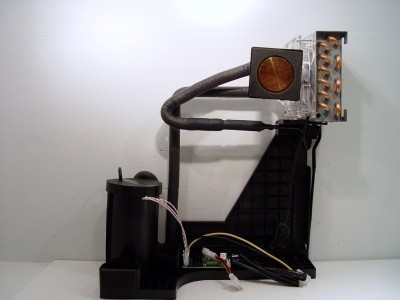 Here we see the other side of the Xpressar system for the first time. Let's now take the first look at the components. 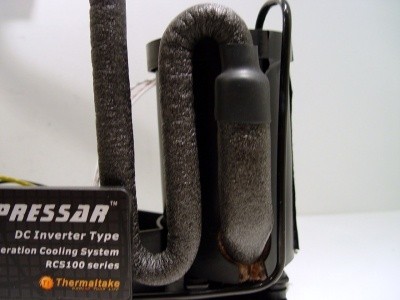 The heart of any phase change cooling system is the compressor. This is where the gas is pressed into a liquid and forced through the other components. 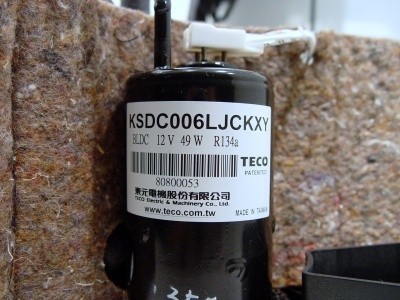 Thermaltake used a 49 watt compressor and here we also see on the label that Thermaltake used R134a refrigerant in their system. This is the same that is used in most passenger cars manufactured since the middle 1990's. Thermaltake's compressor uses 12 volts of power so it is powered by the PCs power supply. 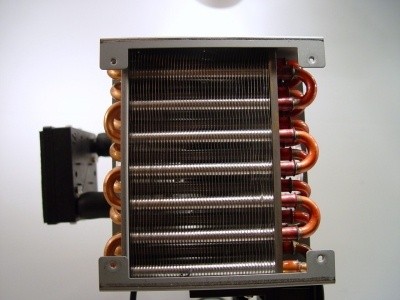 From the compressor the R134a is pushed to the condenser. The condenser resembles radiators used in liquid cooling systems and serves the same purpose. 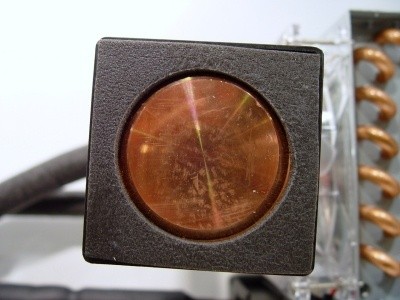 The magic happens on the evaporator just above the processor core. Here the liquid expands into a gas. During this change of phase, the liquid rapidly loses pressure causing the gas to become super cooled while inside of the evaporator.

The gas is then pushed back to the compressor where the cycle continues again. 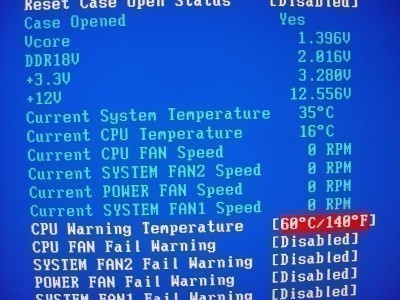 The price of the Xpressar is still unknown, even though we have a pretty good idea of what to expect. Since the Xaser IV costs close to 300 USD on its own, look for the Xpressar to launch at 550 to 600 in the US. A few weeks ago we heard from a reliable source that Thermaltake is working on a lower cost Xpressar that will mount the cooling components inside a few 5.25" CD ROM bays. Hopefully this system will cost much less than our estimates for the current model Xpressar, since the Xaser IV case is not part of the package.

Thermaltake has stated that only a few motherboards have already been certified for use with the Xpressar. This comes from the use of copper for the cooling lines used in the system. The motherboard I used in testing is not on the certified list, but with a few small bends in the copper lines the GIGABYTE X38-DQ6 was able to use the Xpressar with only a few tweaks.

At this time the Thermaltake Xpressar is just a creative design pushed through by Thermaltake's engineers. This team is looking to turn their designs into a full retail product that will be available on retail shelves and at your favorite e-tailer. While we would all like to see Thermaltake succeed in these plans, the truth is that Core i7's high heat output when overclocked may force the engineers to redesign the Xpressar, or at least make them consider a larger compressor or more exotic refrigerant. The more they need to stray off course, the higher the cost will be for consumers.

Stay tuned, CES is just around the corner and I am sure Thermaltake will have a newer revision of the Xpressar ready for us to look at.