Time for the Truth

DTS-HD and Dolby TrueHD on PC - Time for the Truth

It was a rainy winters day in Taipei when I decided to start researching options for full resolution playback of Blu-ray and HD DVD movies on my Vista HTPC. Are you ready? Seriously, are you?

From all the research I conducted in various forums based on end user experience, it looked really positive; maybe I could actually use my existing lounge room computer with little change, not having to go out and buy a standalone player to take care of the HD movie duties. I was super excited after reading up on the latest high-definition audio standards from DTS and Dolby, namely DTS-HD Master Audio (MA) and Dolby TrueHD. I wanted it all right away - give me, give me, give me!

From what I read at the beginning, it seemed as if I could use any half decent 7.1 sound card with eight channel analog outputs to receive and start experiencing new tracks in new and true HD audio style. Was it possible that a $15 magical set of Creative Home Theater cables could actually provide the solution?

The story begins by several user experience posts at various forums which claimed that DTS-HD and TrueHD was indeed possible on the PC, and even fully working. All of the stories posted sounded very similar - each person was using PowerDVD Ultra with a number of different 7.1 sound cards / eight channel analog cables with PowerDVD as the software decoder. They even pulled down the information tab during movies and observed a sampling rate of 96 kHz and audio bandwidth rate above 1Mbps as confirmation. The information tab also confirmed the audio coding mode. They had done it! Or had they? What these enthusiastic end users didn't realize whilst spreading false hope was that PowerDVD merely reports directly from the source file attributes and not what is actually being outputted from the sound card - such confusion! 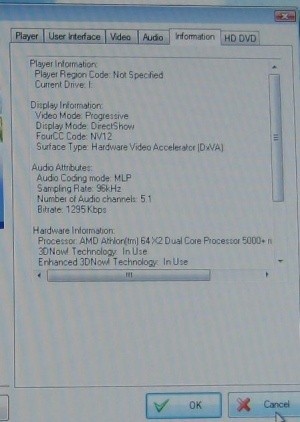 Users noted testing quality between Dolby Digital 5.1 (standard definition DVD quality) and TrueHD and were claiming an audible improvement with TrueHD selected in the movie menu options. It would not be totally inconceivable that a down sampled lossless track provides better audio quality than a non-down sampled lossy track - more confusion added to the mix! 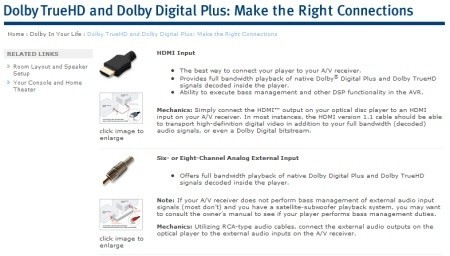 You want more confusion? Just visit the Dolby website once you think you're getting somewhere. On a Dolby webpage entitled "Dolby TrueHD and Dolby Digital Plus: Make the Right Connections" they show an install diagram for "Six- or Eight-Channel Analog External Input". After running around in circles like a mad man, thinking I had almost figured it all out, I re-read the page. I noticed that HDMI input provides, while the analog cable setup offers - two very different words used in a sneaky manor if you consider them carefully. Sure, analog will do TrueHD and Dolby Digital Plus..... on a player and receiver that ignore content protection rules! Show me some of those please Dolby, and consider stop confusing an already baffling subject.

That rainy Taipei day was starting to give me a headache... I needed answers, and quick! Next page please.

In an effort to set the record straight, we went to the people in the know.

We were quickly set in the right direction - let me say it loud and clear, it is currently NOT possible to playback real DTS-HD or TrueHD on your PC when compiling with DRM and all that nonsense. There are basically two reasons for this, but they become much more complicated the further you analyse them.

1) Technically speaking, eight channel analog cables CAN physically output DTS-HD and TrueHD, indeed. Though due to the Advanced Access Content System (AACS) standard and its accompanying DRM rules and regulations, the only cable which can properly output these new HD audio standards (legally and without moving mountains) to your ears is HDMI 1.3. What a crock of poo, huh?

You can jump up and down and shout all you like at folks like CyberLink, but at the end of the day they are only abiding by the rules set by studios and other groups. Even till this day and with content protection satisfied, PowerDVD Ultra only supports up to 5.1 channels of high-definition even though the specification provides up to 7.1 - this should be addressed as more movies are released with full eight channel tracks. Toward the end of 2006 and all of 2007, there was much internal industry confusion over AACS rules and regulations with many changes occurring. The AACS rule should down sample to 640Kbps DD 5.1 here and not here and so on. I am not saying that is a reason or excuse, it is just the way it is.

2) At the time of writing, there are no HDMI PC sound card solutions on the market that you can buy, despite searching high and low. It was obvious that the only solution to this issue was waiting for a HDMI PC audio solution. There is talk of Intel G33 and G35 motherboards (and so on) coupled with Intel ADD2 HDMI card providing a possible solution for this, but they are few and far between and undocumented - so... skip that, what else is there?


Along comes an angel

A company by the name of Auzentech displayed an extremely interesting product at CES in Las Vegas this year called the X-Tension - it is simply a HDMI 1.3 audio signal processing daughter board. Finally we are getting somewhere here! It will hook onto the 40-pin connector on either the Auzentech X-Meridian or new X-Fi Prelude sound cards and will finally provide true HDMI audio output from the PC which will satisfy content overprotection rules for the outbound audio path.

We recently had a long chat with Stephane Bae from Auzentech who mentioned that the X-Tension should be on shop shelves in the June - July 2008 timeframe with a target RRP of $99.99 USD. For any HTPC enthusiast it is like a gift sent down from God - users have been screaming out for it long enough and the sooner this product (and others) rocks up, the better. It may even be bundled with a small HDMI cable with the purpose of running video output from your graphics cards to the X-Tension's HDMI input - finally, audio and video from the PC through a single cable. Auzentech are working on more HDMI related projects right now but we were sworn to secrecy. Look for a public announcement in June.

You can stop going from Google search to Google search and forum to forum now. It was time for the truth and it has been told. We hope that many other companies follow the lead of Auzentech and flood the PC market with HDMI sound cards, which is exactly what needs to happen.

I am sure in years to come we will re-visit the subject of PC audio being behind the eight ball again and again, but it would be nice to have some answers as to why this is - at least on the surface it seems to come down to dollars and cents at the end of the day. PC audio skips a couple beats once again, but is it really anything new? At least we will get DTS-HD and Dolby TrueHD on the PC soon!