The Computer Market in Taipei always has many surprises, and one product that has left an impression on me is the Sandio mouse from a company called Sandio Technology Corporation. After a brief introduction to their product I left them my details and Sandio has since contacted me, asking me to check out their latest addition to the mouse stable.

When it arrived I had no idea what to expect, and even less of an idea about its abilities. The first mouse called the "3D Game O" that I saw a few months ago left such a good impression; so it may be that I am slightly bias. However, the first thing I noticed is the box; it says "Gaming Mouse" on the box cover, but the box doesn't have heaps of iconic Transformer pictures and sword wielding Japanese samurai warriors, so I had to do a double take just to see that they had delivered the correct item.

Yes, I read it correctly the first time; it's a white box, very classy with a picture of the earth, or at least a portion of the globe in the corner. The immediate feeling was unease because although the mouse is presented in a professional way, the box design seems completely out of character compared with other gaming mice that I've looked at. Take a look for yourself: 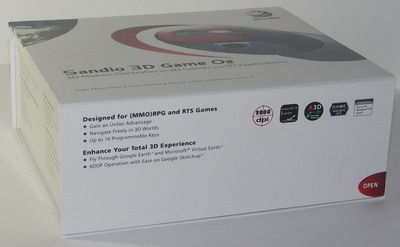 Not what I would expect of a gaming mouse presentation, but rather something you would see appealing to a professional Draughtsman or AutoCad Engineer.

Once I got over the strange presentation, I took a look at what was inside the box. The mouse itself is immediately conspicuous not only because of the many colors, but that it is completely different from any other mouse you have ever seen: 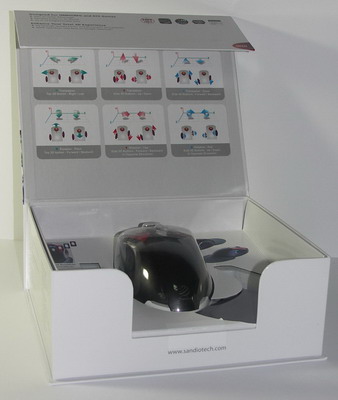 Two is fun, but three's a crowd

The reason that this mouse stands out is that it has not one, not two, but THREE hat switches. These are integrated into the structure of the mouse, each controlling an axis in a 3D plane; so effectively giving you six dimensions to manipulate your cursor on the PC. 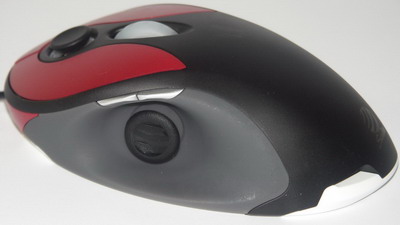 As complicated as it sounds, things get quite interesting when you actually play with the device. I found that my co-ordination is a little off, and as a result ended up over-compensating as I fiddled around and got used to the controls.

What is interesting to note is that the mouse comes with software that has specific profiles for specific games. So just before you play Oblivion or Doom 3, you load up the profile and let the fun begin. I must be honest here and say that the Oblivion profile that I tried was not intuitive, and I wasn't comfortable playing with this mouse in the game at all. It might be because I have spent many hours playing the game without three joysticks involved, but even after an hour it was not much of an improvement.

I then tried to set up my own configuration, which you will have to do if your game is not part of the profile list. This was easy to do, and the instructions were very clear and concise. Unfortunately either my fingers are too long or the hat switches are in the wrong place; but either way, it was not so easy to get used to manipulating the three controls simultaneously without getting a cramp in my hand. I think maybe for a smaller hand it is perhaps ideal, but the jury is out on that one.

As an example of the way this mouse is aligned now, the best way to describe it is to imagine a tennis ball being held by the tip of your three digits (thumb, index and middle fingers). Automatically, your ring finger and little finger close into your hand, and the other three digits can manipulate the ball in almost any direction. Do this for any length of time and you are bound to get a cramp. It would be much better if your hand could be more relaxed while manipulating the controls.

What I really like about this Sandio mouse is that the makers have thought outside the box. They have taken something familiar and well known, and tried to improve it in an ingenious way. The result is suitable for Engineers, Designers, Surveyors and Architects; in fact, anything to do with 3D model manipulation and this device is good for you. There are also over 40 different input options, 16 of them configurable, making this mouse/joystick combo a dream if you hate your keyboard.

An additional feature which is quite innovative (although I was startled when it first happened) is the audible DPI cues. The Game O2 is equipped with a human voice reporting feature that will announce the current DPI setting when it is changed. You may turn the DPI voice-reporting feature off in the 3D Input Management. The audible cues say in a polite but firm voice "400"; "800" "1600" or "2000" for the DPI settings. So in real time you can adjust the DPI settings to four different levels and for convenience with each setting the mouse wheel light color changes accordingly as can be seen in this picture below.

An additional wrist support is provided which clips to the mouse and allows your wrist some rest from all that clicking action; and though good for some, it didn't work for me. For the gamers out there, this mouse caters well for RTS, RPG (MMORPG's) and FPS games. The added movement features and keys give you less reliance on the keyboard and a more intuitive focus into the immersive world you love so much. With 16 different settable configuration keys, it will take some training but it is not beyond the realms of possibility to master it.

The camera views are the easiest to manipulate and I would recommend that after 5 minutes of an easy level that you get right back into your game with this new and innovative device. If you like the look and you think you can adjust to the controls you should look them up as they have distribution branches in Taiwan, USA & China.

For the next model in this series I would like to see the three hat switches arranged in the following way.

The one on the left should be left as is since it is perfect for the thumb; the one in the middle should be transferred to the centre of the "Mouse Button One" position to be in constant contact with the tip of your index finger. The third hat switch should be positioned in the centre of "Mouse Button Two's" position so that it is in constant contact with your middle finger, thus allowing both fingers and your thumb to be comfortable while manipulating the controls. 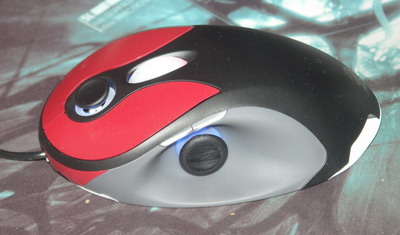 Additional features for the software should be an automatic download function whereby future game profiles can be downloaded from the net along with software updates too. It will also be a valuable tool for the company to track how many people are using the mouse for games. Similarly, profiles should be available for AutoCAD, MicroStation, 3D StudioMax and Google Earth for the same reason. Although the drivers are already integrated in the Sandio Software, there is always room for improvement, so an "update driver" option would also be a welcome touch.

The Sandio mouse is a great invention, definitely ideal for 3D applications and manipulation of 3D objects. The tutorial and provided manuals are excellent. For gamers the mouse is a little bit dodgy, at least from my perspective; but I have long fingers (nope, I'm not boasting).

As a normal mouse with the fantastic 2000 DPI resolution, it is above average. As a 3D mouse for 3D applications it is excellent, but as a gaming mouse it falls a little short from what I expected as well as cramping my hand. Functionality however is good, and while not suitable for me it may be your next best thing to a joystick/joypad. The extras like the wrist pad and adjustable DPI capabilities as well as a funky light theme all give the product more value, but the $80 USD price tag is a little hefty.

TweakTown awards the mouse a sturdy 84% which puts it in the top league, but not at the top. I expect great things from this company, keep an eye out folks.

As the company says: "Elevate your 3D experience" at SandioTech. 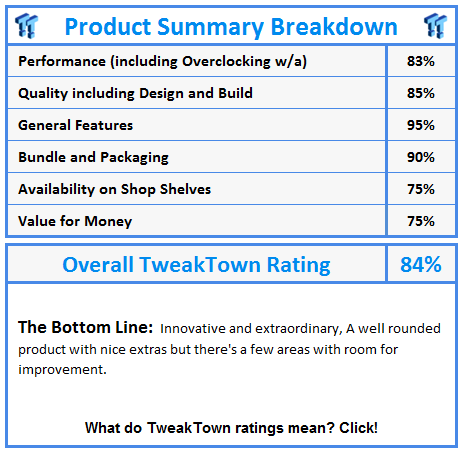