Corsair's HS60 HAPTIC very well could be the future of gaming headsets. The HAPTIC lets you feel sound, adding a whole new level of immersion to your gameplay. It is simply a must-try.
Buy at Amazon

Corsair has just introduced a brand new gaming headset into its already large line of gaming headset options. This one is a little different, though. 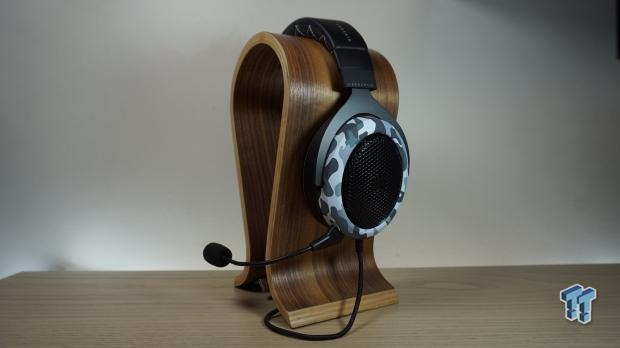 Corsair is already very well known for making quality gaming headsets and peripherals. With such success behind its name, the company isn't shy about stepping outside the box and trying new things. I respect that, as innovation drives the market, which only benefits the consumer in the long run. This brings me to the company's new headset, and while it does have some issues, I believe the overall idea behind the headset is golden.

Introducing the Corsair HS60 HAPTIC, a gaming headset that lets you feel sound. The HAPTIC launches on October 15th for $129.99 MSRP, but how does it differ from the already released HS60? Well, as I mentioned earlier, the HAPTIC comes with new technology that allows gamers to experience a brand new level of immersion. The HAPTIC, which is what the new headset will be referred to in this review, allows the gamer to feel every bass kick like never before. Before I get into how impressive this new technology is, let's jump into a close up of the HAPTIC. 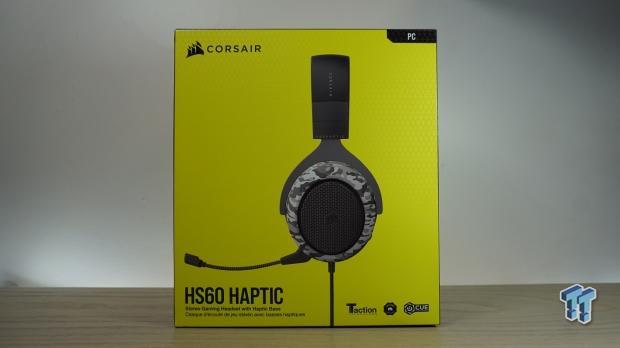 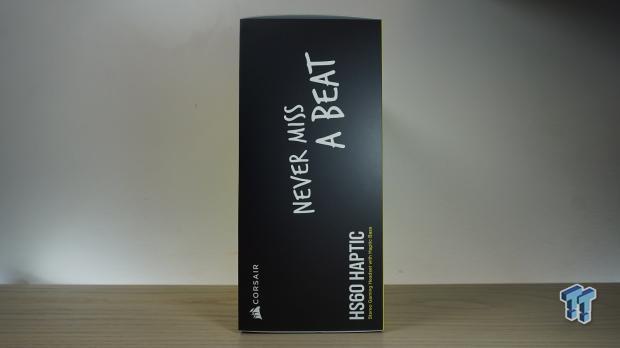 Next, we have an image of the box's side, and it features a cool slogan, "Never Miss A Beat." This same slogan is located on the HS70 Pro Wireless box. 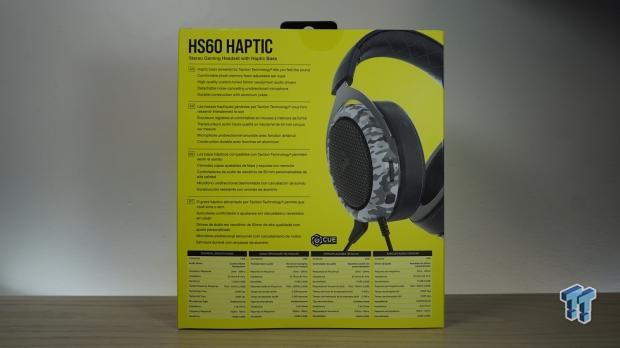 Moving on the back of the box, we can see at the top a more in-depth description of the headsets features, and then below that, multiple languages translating that same description. Below the descriptions, we have technical specifications. 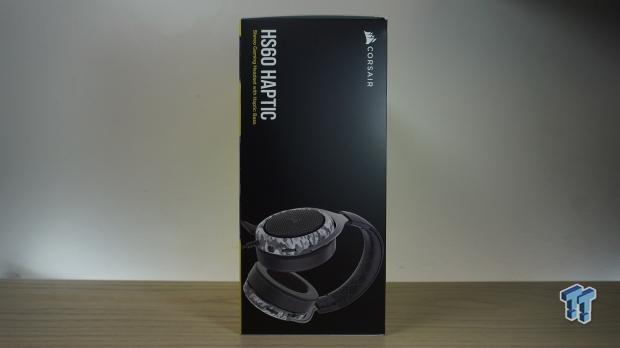 On the final side of the box, we can see a full image of the headset and some simple Corsair branding. 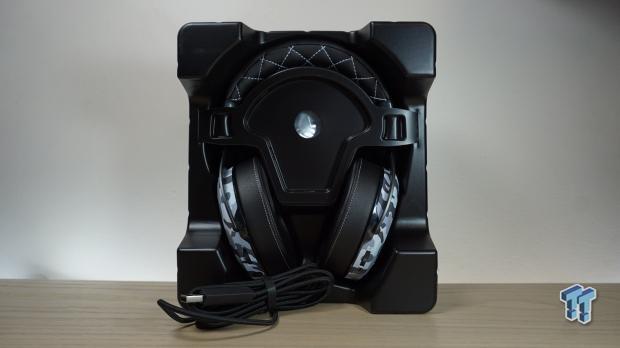 Here we have an image of the HAPTIC in its packaging. This packaging is quite standard for Corsair gaming headsets - no surprises here, but no complaints either.

In this image, we get a full view of the camo pattern on both earcups and the removable microphone and non-removable USB-power cord. 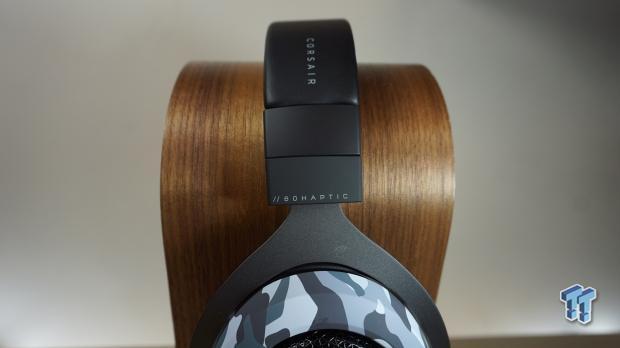 The HAPTIC has come with simple branding on the headband as you can see "Corsair," and also "//60 HAPTIC". I really like minimalistic style branding, as I believe it gives the headset a much more sleek look and not a loud gamery look. Great work here, Corsair. 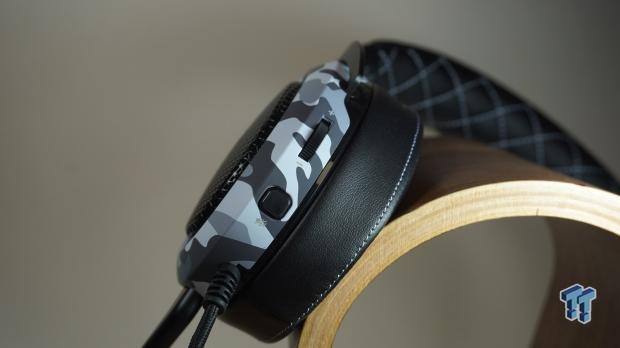 Moving on to the left-earcup, we have some simple function controls that are nicely spaced apart. There is a mute microphone button and a scroll wheel that changes the Windows volume. 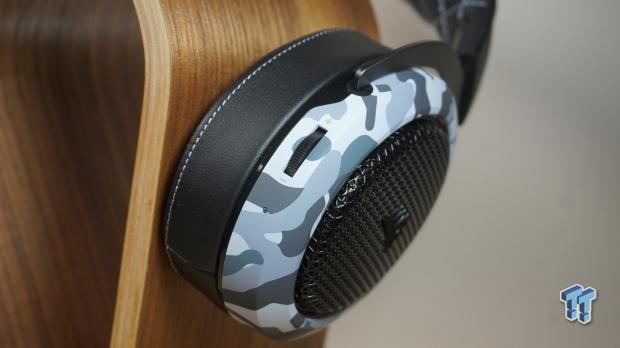 The right-hand side earcup also features a scroll wheel, and this one is specifically for haptic bass, which I will explain more in the design/performance side of this review. 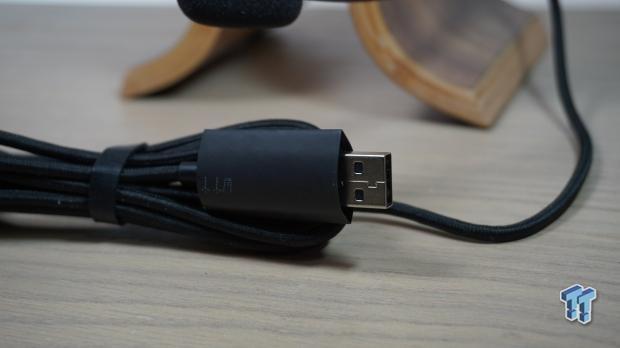 The USB-cord comes with a protective sleeve, and it's 1.5 meters in length. 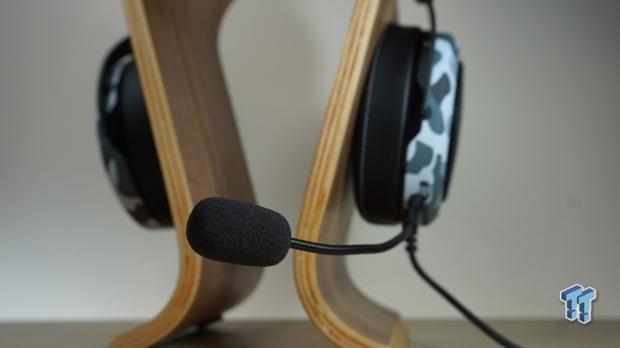 Lastly, we have a close-up of the removable microphone that comes with a pop filter that's also removable.

The HAPTIC is very straightforward when it comes to its design. There are only two wheels and a single mute button, but this is what I like about it. A gaming headset can annoy me if there are too many options on the left earcup as I find that if there is too much functionality on the earcup, it can get overcrowded (depending on the spacing).

The HAPTIC keeps things simple with its left earcup design. You get a volume wheel and a mute microphone button. But that isn't to say that this design comes with some issues. Pressing the volume wheel cycles through the headset's EQ presets - Bass Boost, Clear Chat, FPS Competition, Movie Theater, and Pure Direct. The problem with this design choice is that pressing the volume wheel causes the headset to audibly say the numbered position of the EQ preset that's in your iCUE software.

For example, Bass Boost is in position 1, Clear Chat is position 2, FPS Competition is 3, Movie Theater is 4, and Pure Direct is 5. My issue with this design choice is that gamers will have to either have the iCUE software up on a separate display or alt-tab to check what EQ preset they have switched to. Corsair should have had the audible switching say "Bass", "Clear", "FPS", etc. 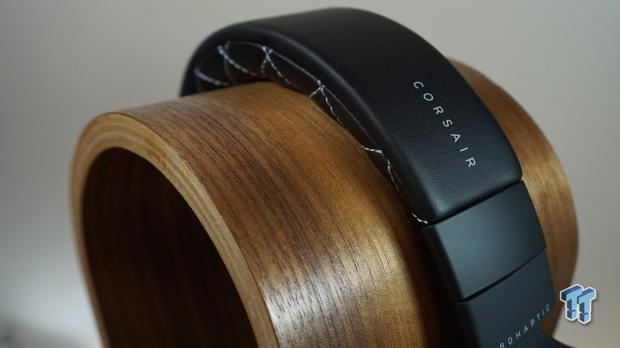 Another design flaw is that when muting the microphone, the headset says, "Mic feedback on/off, mic on/off". I found this particularly annoying, as most of the time, I needed to mute my microphone was when someone was trying to talk to me in real life. I couldn't hear what they were saying because my headset was saying, "Mic feedback on/off, mic on/off". Two distinct sounds, one for mute and one for open-mic, would have sufficed.

Other than the things mentioned, the HAPTIC is a very comfortable headset. It features memory foam cushions and a very comfortable headband. I had absolutely no problems wearing this headset for multiple hours on end. I even wore it for upwards of ten hours when I was doing a long gaming session, and due to how light it is, I felt no discomfort at all. 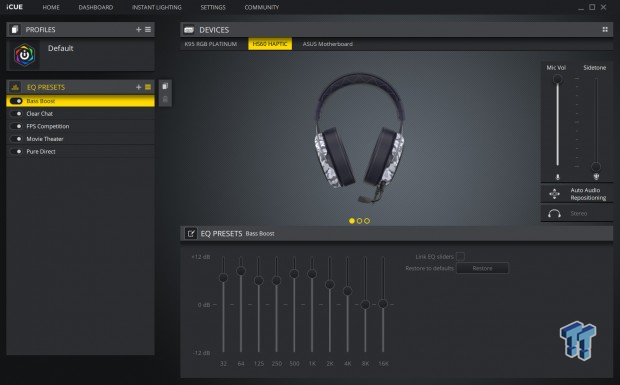 The HAPTIC uses the iCUE software, and if you haven't downloaded, you can find a download link here. As you can see from the above screenshot, you have five EQ presets, microphone volume, and sidetone control. The software is very straightforward, and I recommend you download iCUE if you have any Corsair peripherals as it definitely adds some more value to your products.

With every gaming headset that I get the pleasure of reviewing, I like to use it for upwards of 25+ hours, and the reason for such extended use is to gauge its flaws and positive traits accurately. The HAPTIC has many positives, and I believe the vibration tech included in the headset will eventually become the future of gaming headsets, or at least it will be incorporated in many different headsets in the years to come.

What makes the HAPTIC stand out from all of the other gaming headsets is that it features Taction haptic bass technology, which lets the gamer feel the sound projected out the headset. Firstly, I must say when Corsair advertises that this adds another level of immersion to your gameplay, it does - there is simply no doubt about that.

So, what is Taction haptic bass technology exactly? Well, it's quite simple actually. Imagine running down a battlefield with your squad, and a grenade lands next to you and explodes. Instead of you just hearing that explosion, you will feel its impact through vibrations the headset creates. All low-frequency sound (bass, grenades, drums, etc.) can be felt through the Taction haptic technology. Users have the option of changing how intense that vibration with the right earcup haptic effect control. 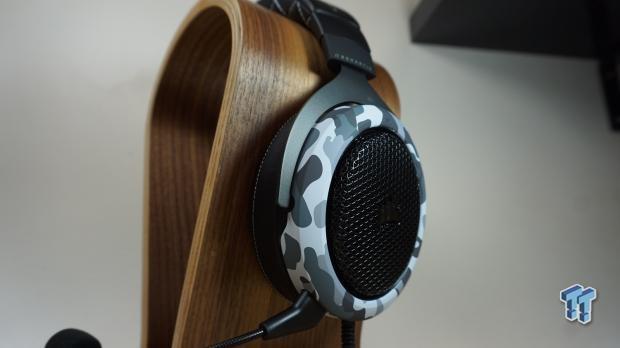 The HAPTIC gave me one of the most unique gaming experiences I have ever had with a gaming headset. I took the HAPTIC through multiple games of Apex Legends, and wow, it certainly added a new level of immersion to my gameplay. In some of my first games, I cranked the haptic effect level to the maximum, and I quickly found out that the effect was far too intense as the low-end over-saturated the rest of the audio, which made it extremely difficult to hear footsteps. On top of that, with the haptic effect maxed, the sound effects from guns became altered, and overall I felt it reduced the audio quality of the game.

After some considerable use, I found that the haptic effect's best spot was about 40% power. Keeping the effect at this level allowed me to feel its impactfulness but not let the effect take away from all the other audio frequencies (mids/highs). As for the HAPTICs general audio quality, I felt that it sounded very similar to the Corsair HS70 Wireless, which is pretty damn good for its price. The highs and mids were nice and clear, and the lows paired with the haptic effect sounded very bassy.

The HAPTIC was decent for music listening, but it didn't stand any chance when I compared the audio quality to my AIAIAI headphones paired with my Schiit Hel. Gaming headsets have come a long way in terms of being decent for music/movies, but I feel that they still can't beat out a great pair of headphones with a DAC/Amp combo.

I played many songs through the HAPTIC, and I felt that songs that were more bass orientated or had a nice low-end really shined. Example genres that sounded good through the HAPTIC are hip-hop, heavy metal, and select movie soundtracks from Hanz Zimmer.

I believe the vibration technology inside the HAPTIC is the future of gaming headsets. While it might be a little rough around the edges now, I can see many, many gaming headsets in the future adapting this technology in one way or another. The HAPTIC is also very lightweight, and that paired with its comfortability, it makes for prolonged gaming sessions very easy and enjoyable.

Most of the flaws of the HAPTIC are in its design. The fact that the headset says microphone on/off was very annoying and also cycling through the EQ presets seemed pretty barebones. Another personal complaint of mine was the lack of clamping pressure, but I understand that this is a personal preference complaint and won't be universal for everyone.

Corsair has stepped outside the box of typical gaming headsets with the HAPTIC, and I applaud them for doing that. 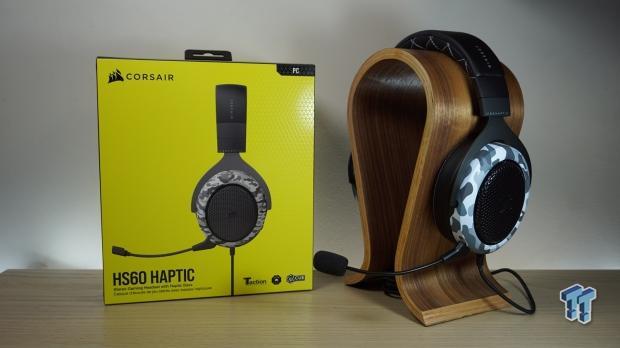 As I mentioned in the introduction, innovation drives the market, which only benefits the consumer, and the HAPTIC is a direct representation of that. I love the idea of gamers being able to feel the sound and not just hear it, as I truly believe it adds another level of immersion that is yet to be truly understood. I also think that this new level of immersion will slowly become the norm for many gaming headsets, and Corsair is ahead of the curve with the HAPTIC.

There is still large room for improvement with HAPTIC, and what I mean by that is one thing in particular - sound profiles for specific games. Imagine if you could download the Apex Legends HAPTIC sound profile through Corsair's iCUE software. This sound profile would be specific for Apex Legends and would provide the most accurate in-game soundstage for the HAPTIC. This would mean precise vibrations instead of across the board vibrations like the HAPTIC does now. I believe that sort of sound imaging will be the future of these types of headsets.

Want next-level immersion in your games? Look no further than Corsair's HS60 HAPTIC. Welcome to the future of gaming headsets.

Corsair's HS60 HAPTIC very well could be the future of gaming headsets. The HAPTIC lets you feel sound, adding a whole new level of immersion to your gameplay. It is simply a must-try.