The Samsung Portable SSD T7 is an excellent value with three colorways joining three capacity options, all competitive in both price and performance.
Buy at Amazon

Samsung's release schedule has slowed significantly over the last year. Going back to 2015, we had one release every year for their portable lineup, but 2019 ended with no movement in the market.

Early February, Samsung surprised us with the T7 Touch, a drive very similar to today's Portable SSD T7. Removing the Touch's fingerprint reader will almost net you a T7 directly, but Samsung has shaken things up slightly with several new colorways and capacity options.

Connectivity is still pushed over USB-C with a USB 3.2 Gen 2-layer underneath. This maintains backward compatibility with all USB standards and allows the drive to reach full potential at 1050 MB/s if we go by marketing numbers. Capacities available include 500GB and 1TB and 2TB solutions, all with three colorways options - red, blue, and space grey. 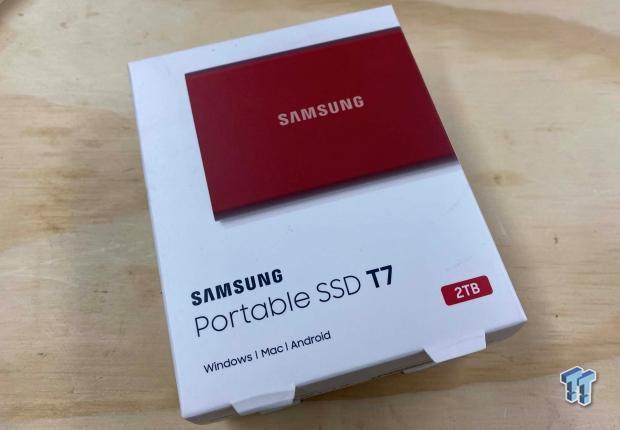 The packaging is quite colorful for the T7, an image of the drive in the center, capacity bottom right, OS compatibility along the bottom. 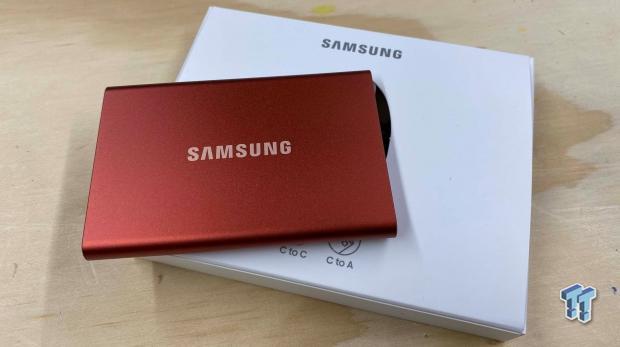 Unboxing, the drive itself is separated from its cables; our sample is the red version. 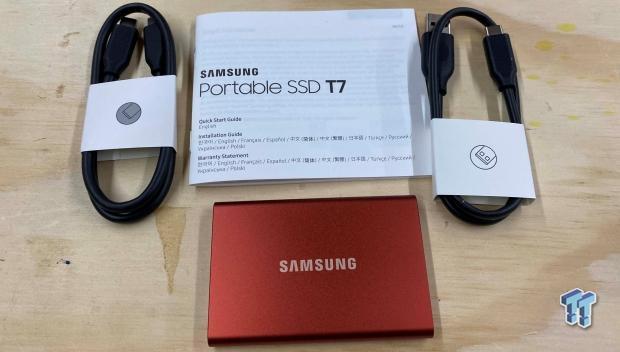 The scope of delivery includes both a USB-C cable and A to C cable for legacy connections. 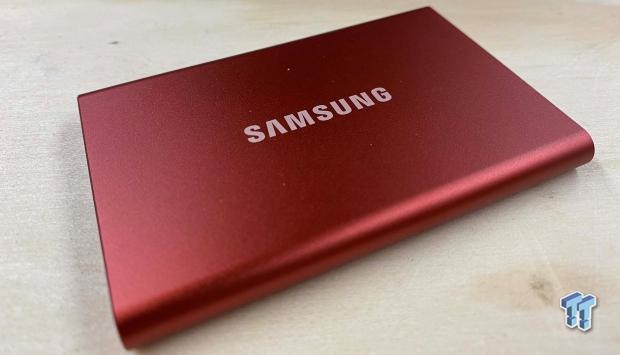 A closer look at the T7, we have a smooth aluminum finish anodized in one of three colorways.

The drive offers its USB-C interface along the bottom edge. 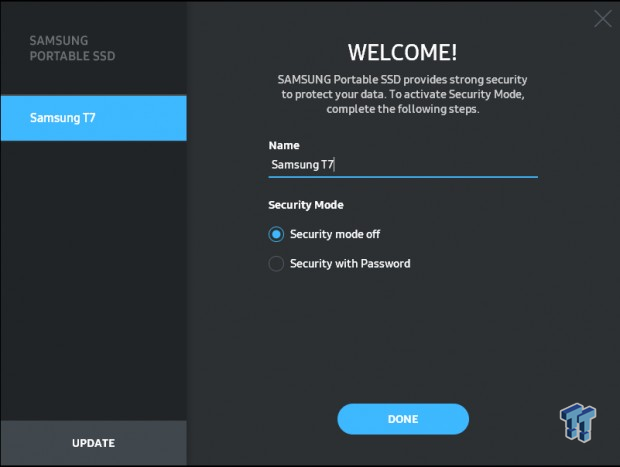 While the T7 doesn't have the fingerprint reader for outward-facing security, it still has the same encryption software. 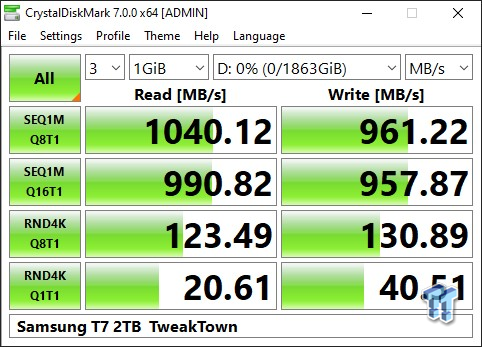 CDM is a staple in performance testing; version 7 has seen some updates in the workloads used for testing. Sequential performance tops out at 1040 MB/s read and 961 MB/s write for the T7. 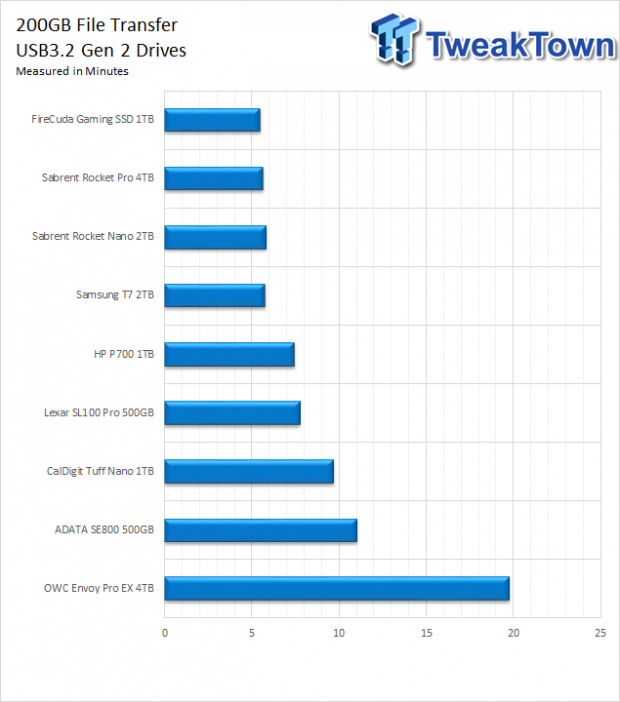 Our top four drives in the File Transfer chart all transferred 200GB of data under 6 minutes. The T7 joins this club in the fourth spot, with an identical time to the Rocket Nano from Sabrent. 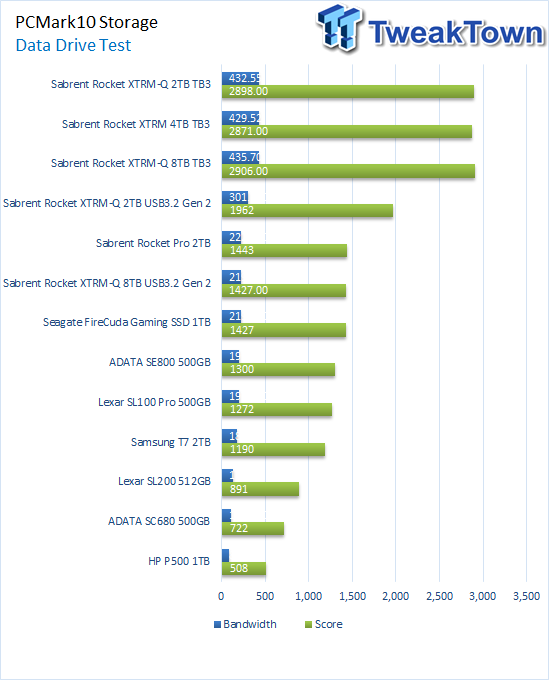 PCMark Data Drive is a purpose-built storage test for external drives. In this scenario, the T7 comes in behind the Lexar SL100 Pro with a score of 1190. 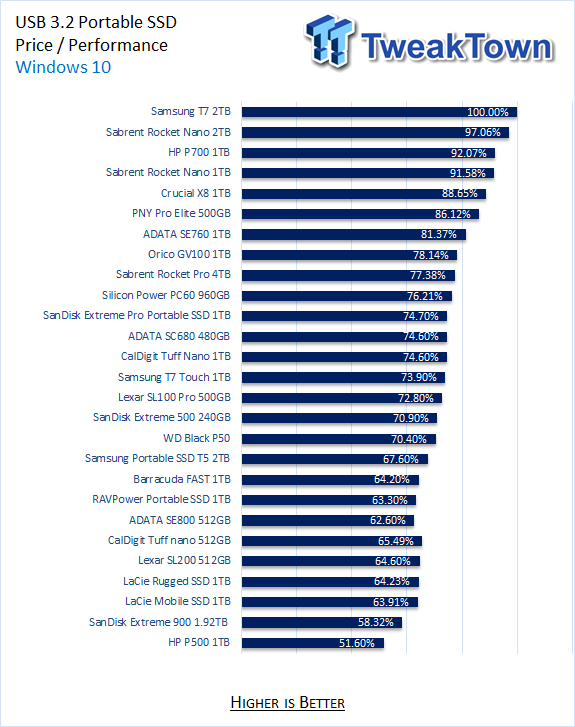 Taking the top spot away from the Rocket Nano, the T7 does quite well in both average performance at a lower price than competing solutions.

Samsung is yet another vendor that I carry high expectations for, based on their prowess as a market leader in NAND technology. With the T7, I feel they have lived up to that, with a rather well-built solution, excellent fit and finish, and solid colorway choices.

The performance was slightly better than February's T7 Touch, going from 1011 MB/s to 1040 MB/s read in testing today. Write performance, too, took a bump from 885 MB/s with the Touch to 960 MB/s with the new T7. The T7 took the tops of several charts from the Rocket Nano, the first being our file transfer testing and the second price/performance.

Getting into pricing a bit more, the T7 is on point with an MSRP of $299.99 for the 2TB model. It matches nearly all competitors, including the Rocket Nano, while coming in $50 cheaper than its counterpart, T7 Touch, at the same capacity.

The Samsung Portable SSD T7 is an excellent value with three colorways joining three capacity options, all competitive in both price and performance.