Thunderbolt 3 is the current king of all interfaces, especially for multi-bay DAS solutions. Earlier in the year, we had the chance to look a the mid-range 6Big Thunderbolt 3 from LaCie that offered 24TB of capacity with options up to 96TB. Today, we switch gears and move up to the top tier 12Big Thunderbolt 3, doubling the bay count and pushing the top capacity up a notch as well.

The 12Big is a standalone twelve-bay RAID platform developed to offer high-performance storage for creative professionals, slashing valuable time off post-production workflows. The 12Big offers an amazing 168TB peak capacity that can ingest hours of RAW footage, allowing you to edit multiple streams at once, even uncompressed 10-bit and 12-bit video.

The marketing performance of the 12Big is pushed up from the 1400 MB/s of the 6Big to 2600 MB/s in this 12-bay tower. At the bottom, we have 48TB as the lowest capacity with a 72TB, 96TB, and 120TB model filling the gap between it and the top capacity 168TB solution. Each is deployed with enterprise-class drives. For us, it was Enterprise Capacity V5 from Seagate, while newer models will see the IronWolf Pro.

Compatibility for the 12Big includes both Windows and macOS with LaCie RAID Manager supporting both platforms. You will need a Thunderbolt 3 port for full performance, but can connect over USB 3.1 as well. MSRP of the 12Big Thunderbolt 3 in the 72TB capacity comes in at $5299 with a five-year warranty. 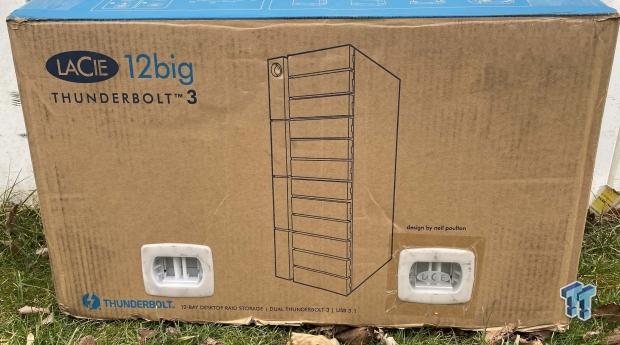 The packaging is quite large for the 12Big, as you can imagine, but we do have branding and image of the tower on the front. 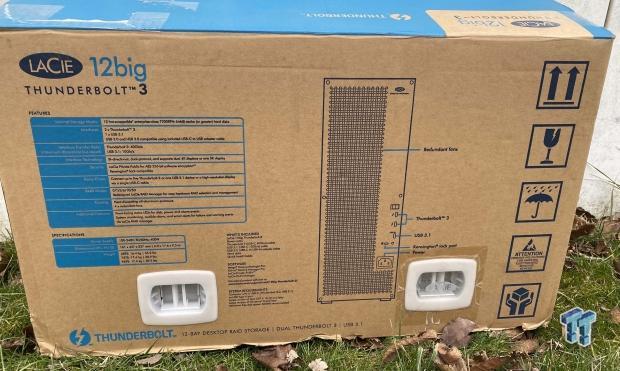 The backside goes into detail with features and specifications listed to the left and a breakout of the tower on the right. 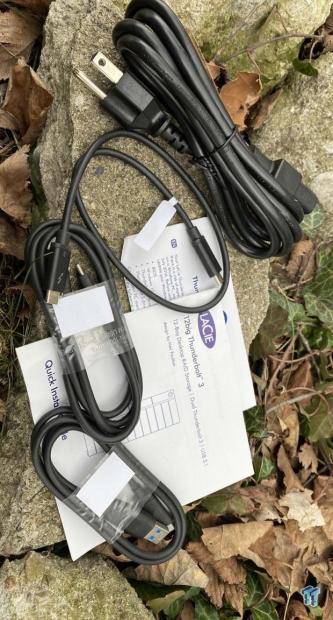 Included, we have the power cable, Thunderbolt 3 cable, and Type-A to USB-C cable. 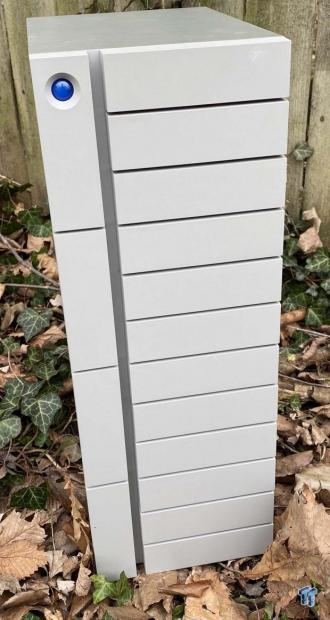 Looking at the tower, we have the same Neil Poulton design we have seen from past 2Big and 6Big solutions with 4x 3-bay sections. 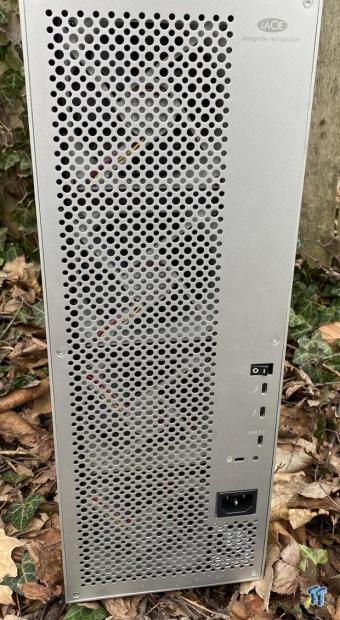 The back of the tower has a full mesh panel with a compliment of Noctua fans. To the right, we have connectivity in dual Thunderbolt 3, USB-C, and Kensington lock. 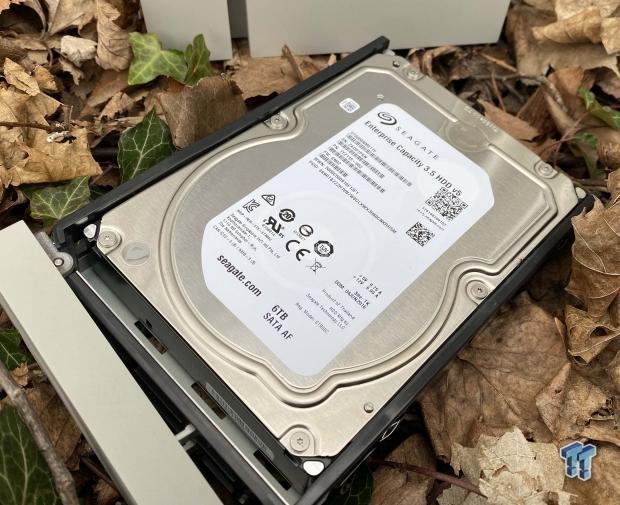 The drives included for our 12Big were Enterprise Capacity V5. 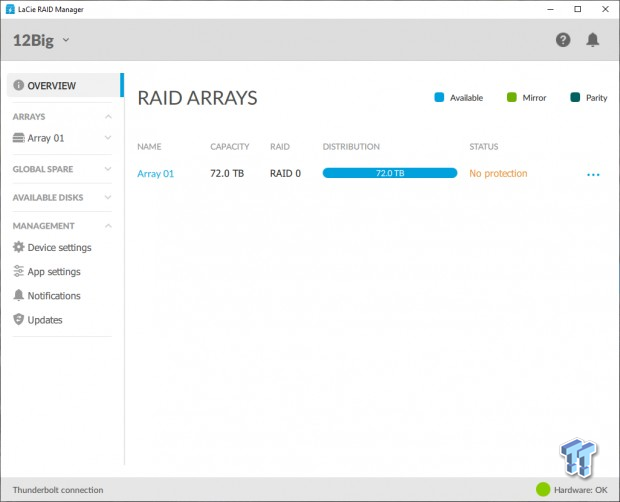 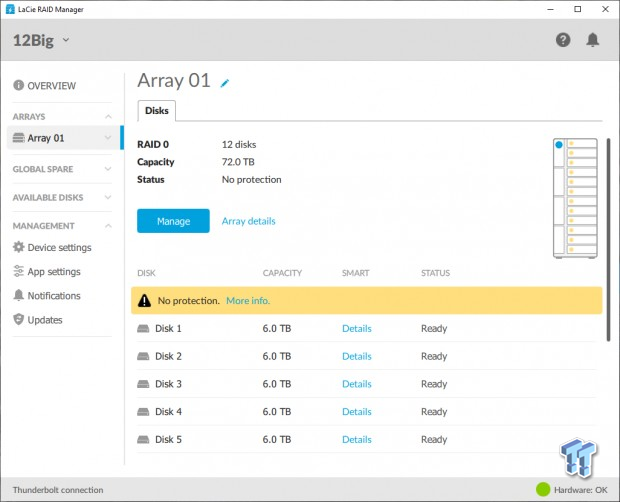 Seen above, we have the array overview, which gives us a look at the health of the drives connected. 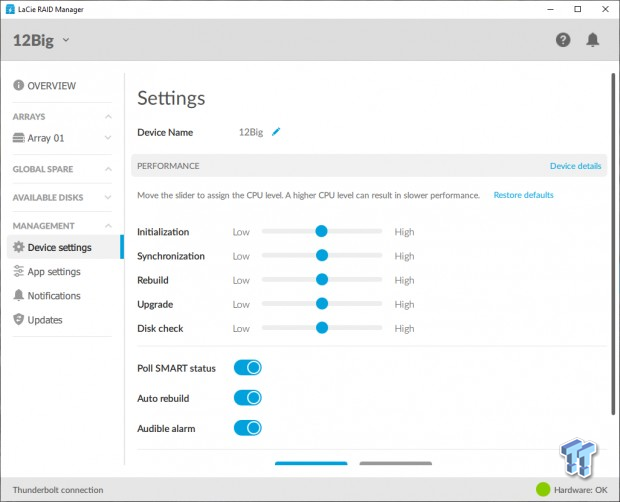 Device settings allow configuration of your 12Big, including performance characteristics of drive init, sync, and rebuild. You can also enable or disable automatic drive rebuild. 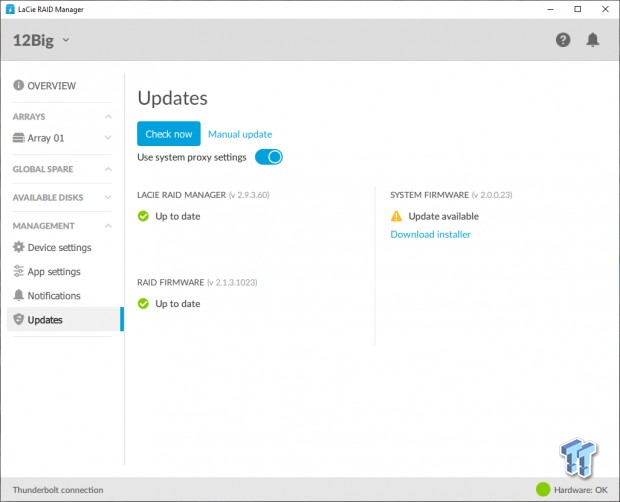 Updates check both the software and 12Big hardware for any upgrades needed. 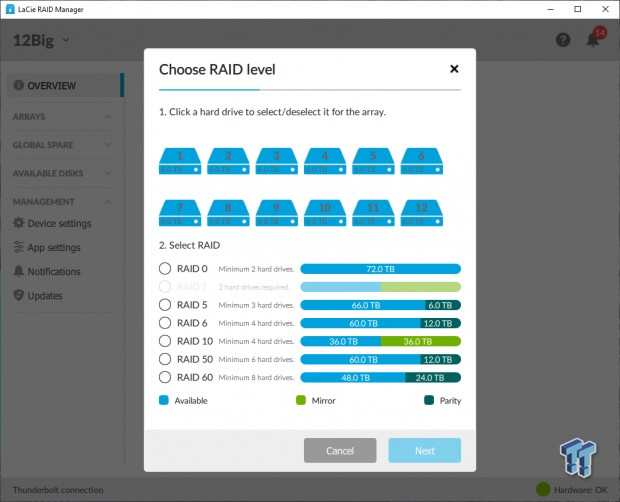 RAID level support includes all of the options seen above. For testing, we are running through RAID 0 for peak performance results and RAID 6. 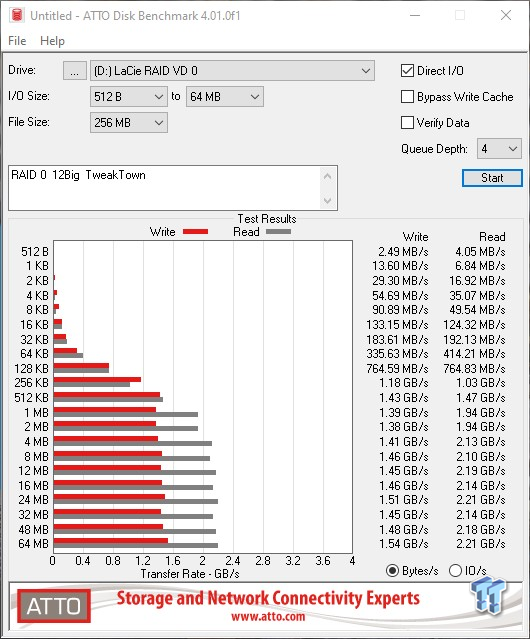 A quick run through in ATTO with the 12Big set up in RAID 0 across all twelve disks give us peak read numbers of 2.2 GB/s. Write performance pushes 1.6 GB/s. 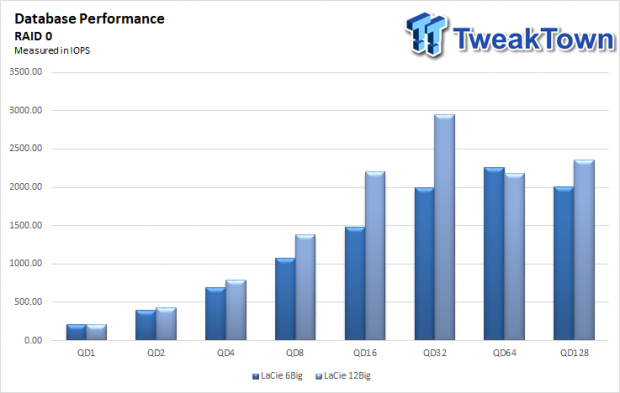 Moving into workloads, we start with Database performance. The 6Big and 12Big offering similar performance through QD4, after which the 12Big starts to pull away, reaching a peak of 3000 IOPS at QD32. 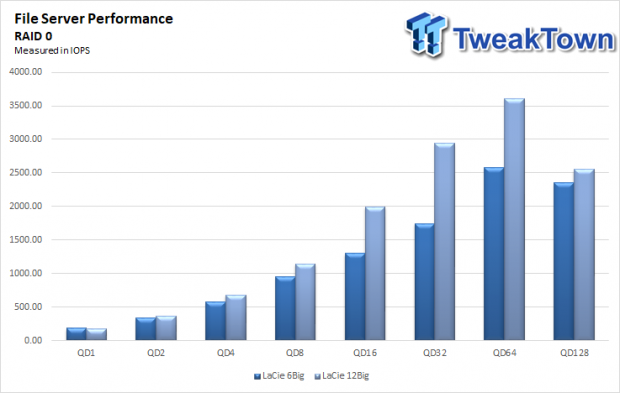 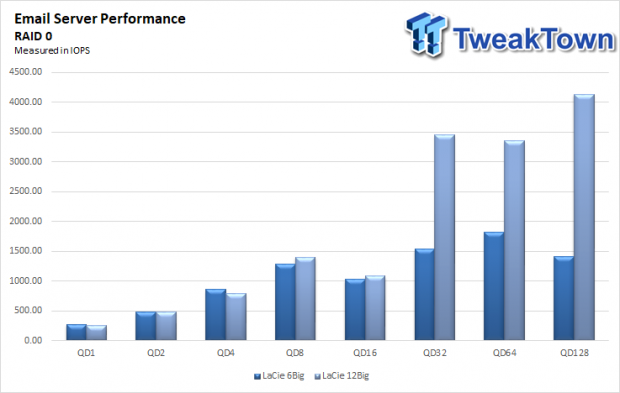 Email Server is rather interesting with neither platform really pushing past 1500 IOPS until QD32, where we see the 12Big tap 3500 IOPs and peak at 4000 IOPS QD128. 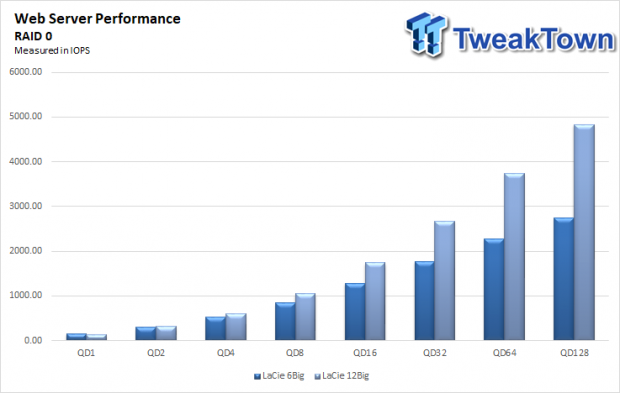 Web Server produces a beautiful chart with symmetrical performance from both appliances. The 12Big reaches a top mark of 4800 IOPS at QD128. 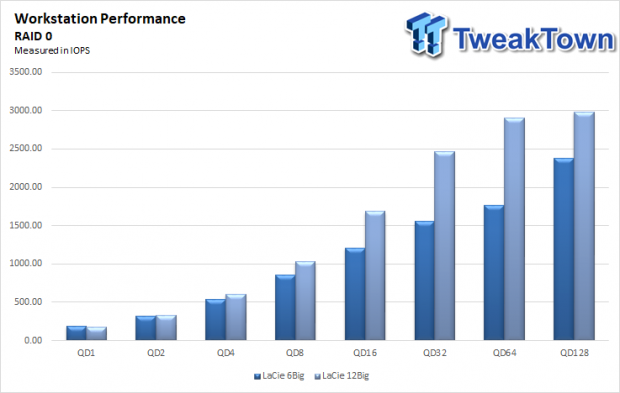 Wrapping up RAID 0, we have Workstation performance showing a peak of 3000 IOPS for the 12Big at QD128. 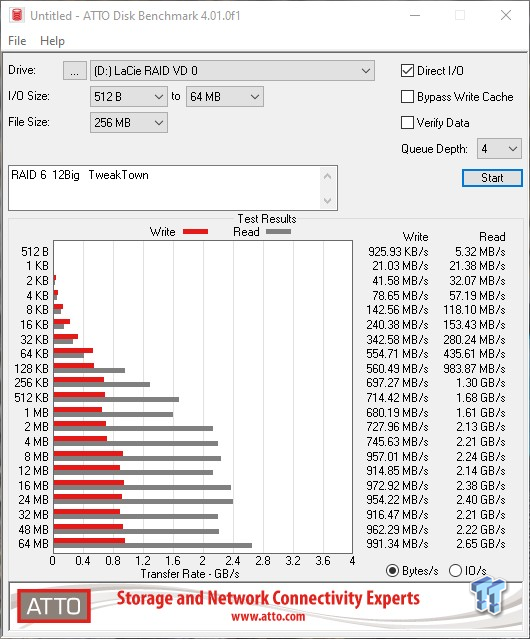 A quick run through in ATTO with the 12Big setup in RAID 6 across all twelve disks give us peak read numbers of 2.6 GB/s. Write performance pushes 991 MB/s. 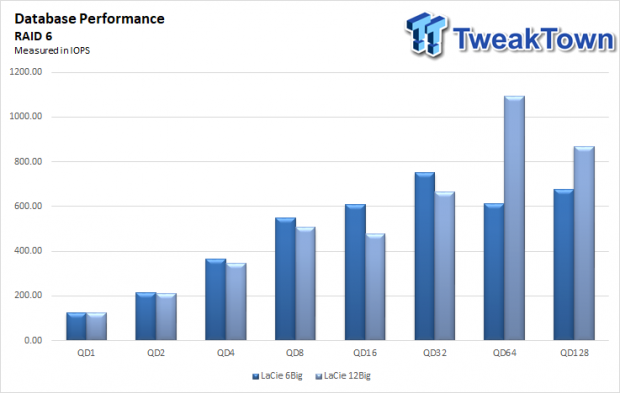 Moving into workloads, we start with Database performance. The 12Big and 6Big platforms offer similar performance through QD32. The 12Big reaches peak performance right after a touch shy of 1200 IOPS. 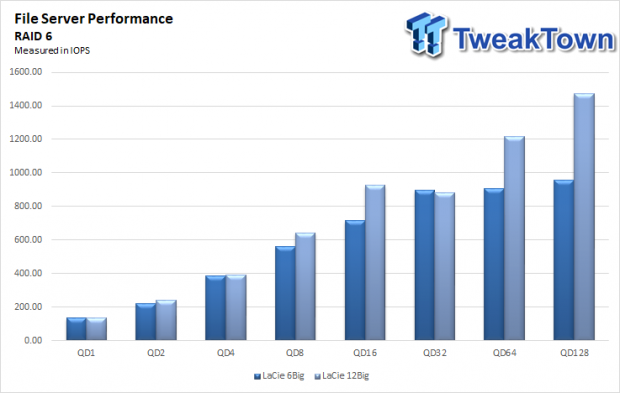 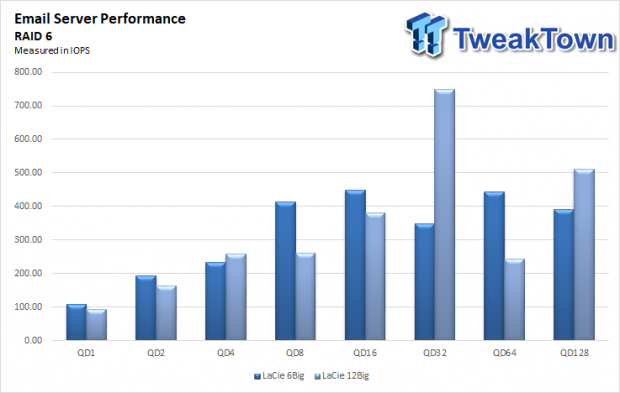 Email Server is rather interesting with neither platform really pushing past 500 IOPS apart from QD32, where we see the 12Big tap 750 IOPS. 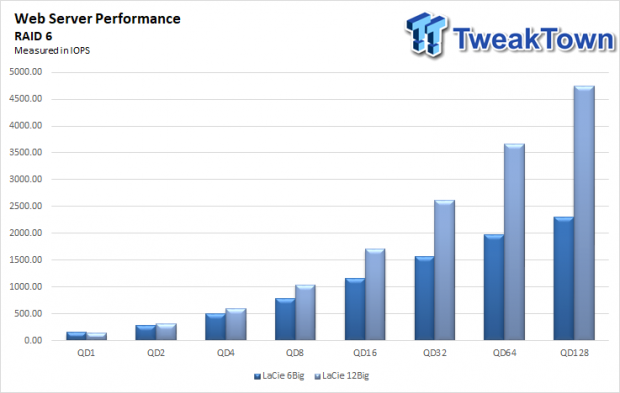 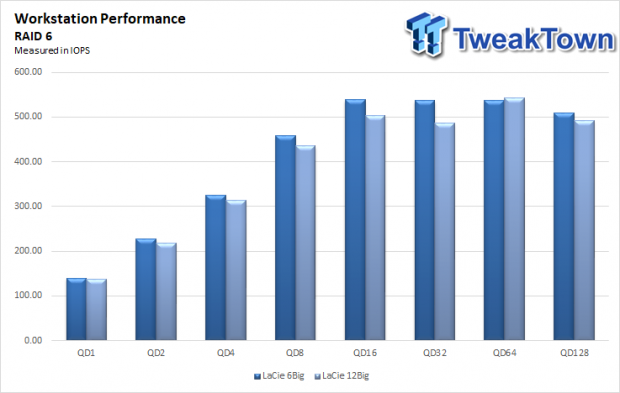 Wrapping up RAID 6, performance is equal between the 6Big and 12Big appliances throughout; peak numbers touch a bit over 500 IOPS.

Just like the 6Big, the 12Big is a beast of an appliance, and nothing signifies this more than the sheer weight coming in at 38lbs. That said, this platform is held together by a solid aluminum enclosure fitted with proper drive trays, cooling fans, and power supply.

Workload testing showed amazing results for RAID 0 pushing upwards of 3K IOPS in Database, 3500 IOPS in File Server, and 4K IOPS in Email Server. RAID 6 proved similar in the first three workload scenarios, albeit lower numbers, Database at 1100 IOPS followed by 1400 in File Server, and 700 IOPS for Email Server. Top performance for both RAID 0 and RAID 6 came in Web Server, where we saw near 5000 IOPS for each array.

Closing this out, 12Big isn't going to be for everyone. The significant investment into a platform like this alone will weed out those not truly committed. That said, the 12Big stands alone as the only 12-Bay turn-key Thunderbolt 3 platform as the Areca 8050 does not offer drives and PegasusR32 tops out at 8-bays just as the G-Speed Shuttle XL does from WD.

Professionals that want high capacity will want to put the 12Big on the shortlist as it offers an impressive peak capacity of 168TB with dual connectivity of Thunderbolt 3 and USB-C.